The Met Office has issued a severe weather warning for today (Saturday 26 March) and another for Easter Monday (28 March).

The official weather forecaster has warned that high winds will affect the Sussex coast, including Brighton and Hove, with gusts of up to 60mph today and 70mph on Tuesday.

Forecasters predicted a combination of wind, rain and strong waves hitting the shore.

And to make it even more like a typical bank holiday weekend, train operator Southern said that there would be no services to and from London on the mainline until Tuesday morning (29 March).

Network Rail said that it was carrying out “major renewals at Battersea”. 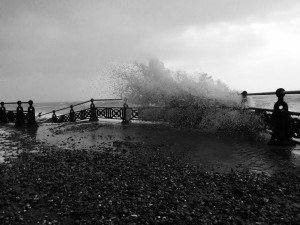 After a glorious Good Friday yesterday, the Met Office said this morning: “A swathe of strong winds, accompanied by a band of heavy rain will move east across England and Wales during Saturday afternoon and early evening.

“This is expected to bring gusts of 40mph to 50mph to inland areas, perhaps 60mph across exposed coasts and hills, as well as on the passage of the cold front, when heavy rain could also produce some very localised surface water flooding.

“Please be aware of the possibility of localised low levels of disruption to Easter travel plans and other holiday activities.

“An active frontal zone is expected to move east across the country through Saturday, accompanied by strong, gusty winds and one or two spells of heavy rain.

“While expected wind gusts will not be unusual for March, the fact that it is Easter may lead to a few extra problems.

“Winds should ease markedly as the front clears through, particularly in the south.” 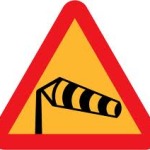 While it may be breezy tomorrow (Sunday 27 March) the speed and the strength of the wind is not enough to prompt a severe weather warning.

But the Met Office said: “Winds will strengthen markedly across southern England and through the Bristol Channel from the start of Monday, with the potential for 50mph to 60mph gusts inland and 70mph gusts around coasts exposed to the south.

“While there is a low likelihood of all areas seeing these strong gusts for a time southern coastal counties from Hampshire eastwards look most likely to see the strongest winds.

“These will then ease from the south west during the morning, clearing from the east early in the afternoon.

“Additional hazards may include large waves around exposed coasts as well as a period of heavy rain.

“Please be aware of the potential for disruption to outdoor activities and travel, as well as the possibility of fallen trees and temporary interruptions to power supplies.

“An area of low pressure is expected to rapidly deepen to the south west of the UK later on Sunday and then run north eastwards across England and Wales on Monday accompanied by some very strong winds, large coastal waves and heavy rain.

“There remains a fair amount of uncertainty over the track and timing of this system and so where and when the peaks of strongest winds will occur.

“However, there is a continuing signal for a period of disruptive winds, perhaps now more focused towards south eastern parts of England.

“This alert will be updated on Sunday in light of further information.”

Southern Railway said: “High winds have been forecast across parts of our route throughout the bank holiday weekend.

“We will be working with Network Rail to ensure we are prepared and can continue to deliver our planned service for you.

“At this stage we are not expecting services to be affected however there is the potential for debris or fallen trees to affect the network particularly in coastal areas.”

Southern said that there would be “no Southern or Gatwick Express trains to and from London Victoria from Friday 25 March to Monday 28 March”.

It added that there was still an amended service between Brighton and stations to Ashford International after a landslip between Lewes and Polegate.

The train company said: “A 5mph emergency speed restriction has been put in place on the line between Polegate and Lewes.”

Network Rail said: “Over 15,000 members of Network Rail’s Orange Army will be working over the four-day Easter weekend to deliver a £60 million slice of the company’s £40 billion Railway Upgrade Plan to provide a bigger, better, more reliable railway for passengers and businesses.

“The railway, however, remains firmly open for business as the vast majority of services will be unaffected by this programme with over 95 per cent open as normal.

Work started late on Thursday (24 March), Network Rail said, adding: “More than 450 separate improvement projects will be carried out by Network Rail and its team of contractors across Britain over the period, the majority of which will have no impact on passengers.

“Where there are changes to services as a result of upgrade work, a comprehensive advertising campaign is under way to make sure passengers are able to make informed decisions about their travel over the Easter weekend.”

The work at Battersea – close to Victoria Station – will mean no trains to or from Brighton and the London terminus.

Network Rail chief executive Mark Carne said: “I’m acutely conscious that many people want to use the railway during the Easter holidays but, with fewer people travelling by train over this four-day weekend, it is a good time to undertake these massive improvement projects.

“The vast majority of services will be unaffected by this programme, with over 95 per cent of the network open as normal.

“Passengers have shown themselves to be incredibly understanding of planned improvement work and I’d like to thank them in advance for their support and understanding as we deliver the big improvements that the travelling public want to see.

“The number of people travelling by rail continues to grow to record levels. Our work this Easter forms a key part of our Railway Upgrade Plan to meet surging demand and improve and expand our congested railway network.”