Brighton and Hove Albion to sign Sidwell from Stoke

Brighton and Hove Albion have agreed to sign midfielder Steve Sidwell from Stoke City on a one-year contract from Friday 1 July.

Albion said: “Sidwell, who spent the second half of last season on loan with Albion, will join the club once his contract with the Potters expires at the end of the month.

“It will be his third spell with the club and the first time he has signed permanently, having previously twice played for the club on loan.” 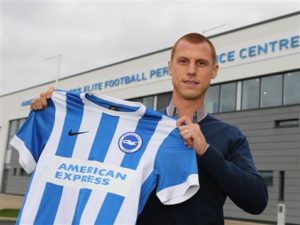 Seagulls boss Chris Hughton said: “During his time on loan Steve showed his qualities and I am delighted he has become our first signing of the close season.

“Steve knows exactly what the Championship is all about and what it takes to get promoted from this level, having achieved that feat with Reading. He is a strong character and a great pro.

“He was excellent for us in the run-in and was a key figure on and off the pitch as one of the senior members of the squad.”

Sidwell was born in Wandsworth, London, and began his career with Arsenal. He spent time on loan under Steve Coppell at both Brentford and Albion, before moving to Reading in January 2003.

He helped the Royals win promotion to the Premier League in 2005 and then joined Jose Mourinho’s Chelsea on a free transfer in the summer of 2007.

He has played in the Premier League for Aston Villa, Fulham and Stoke, making more than 400 senior appearances and scoring 61 goals. He scored five goals in his 12-game first spell with Albion.

Sidwell made 18 appearances for Albion last season, scoring once, a vital late winner at the City Ground in the 2-1 win over Nottingham Forest.