The two-week Take Part festival of sport and physical activity is under way today (Saturday 18 June) with the opening taster day taking place on The Level.

The event, organised by Brighton and Hove City Council, runs from noon to 5pm today at the new venue – previously it was held in Preston Park.

The council said: “This year’s Take Part festival kicks off with a wide range of sports and activities to try out at the launch day on Saturday.

“The festival launch day takes place from 12 noon to 5pm at The Level, bringing the popular festival into the heart of the city.

“Throughout the day there will be performances and demonstrations, the chance to find out about local clubs and to speak to health and fitness experts. 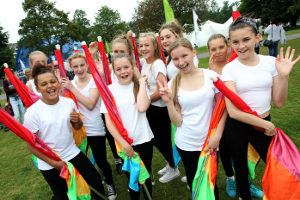 “Take Part is organised by Brighton and Hove City Council’s Sport and Physical Activity Team in partnership with over 100 local sports clubs, dance groups and activity providers and runs from Saturday 18 June to Sunday 3 July.

“Brighton School of Samba will start the day at 11.30 with a parade followed by the official festival opening by the mayor.

“Compered by JP Omari, the launch will include taster sessions, performances from 32 dance and dance fitness groups and Streetfunk crews, including the newly crowned U14 Southern Streetdance European Champions, Stereoshok.

“There will be a Rio carnival half-hour featuring Maracatu du Sol, Amazonas Arts and Marta Scott Dance Company who will lead the crowd in some Samba moves.

“New for this year, there will be the Young Dancers Collective, Clubbercise and a mum’s dance crew called Mums da Word.”

For more information about the programme and to find out what’s happening during the festival, click here.