A property developer from Brighton won Big Brother on Channel 5 last night – to the shock of many viewers.

Jason Burrill, the oldest winner at 45, beat the bookies’ favourite Hughie Maughan for the £70,000 prize. Less than 1 per cent of the votes separated the two finalists.

Many viewers tweeted their unhappiness about the result, with comedian Paddy McGuinness even likening the supposedly dull winner to a brick.

Earlier in the 48-day contest Jason Burrill won £20,000 from a task in which he then eliminated house favourite Lateysha Grace.

After the results were announced, he was asked by presenter Emma Willis if he ever thought he had any chance of winning the show. He replied: “No, none whatsoever. I didn’t think I would be here from day one.” 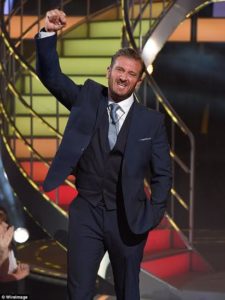 One of his fellow contestants during his time in the house was his ex-girlfriend Charlie Doherty. She has since spoken about how difficult she felt he made her experience of the Big Brother house at Elstree Studios.

As well as being a property developer, Jason Burrill owns beauty salons in Sussex and works as an actor and body double. He was a body double for Dave Bautista in the Bond film Spectre and for a role in Guardians of the Galaxy.

He is not the first man from Brighton to win the TV contest. Pete Bennett, 34, won in 2006 when the programme was broadcast by Channel 4.