Plans for an £80 million scheme to build homes, shops and offices on land by Hove Station and the Conway Street bus garage have been submitted by Matsim Properties.

Matsim is also asking for planning permission to create a basement car park in its application to Brighton and Hove City Council.

In their place Matsim would build a mixed development ranging between for and seventeen storeys high.

The developer has consulted extensively over the past year on the scheme, known as Hove Gardens, having put a lot of work into a previous scheme – Hove Square – which didn’t even get this far.

One of the key changes is the inclusion of a higher proportion of one-bedroom flats in response to an assessment of future housing needs locally.

Matsim director Simon Lambor said: “We hope that this can be the first phase and catalyst in the wider regeneration of the Hove Station Quarter that can provide desperately needed homes and employment space for the city. 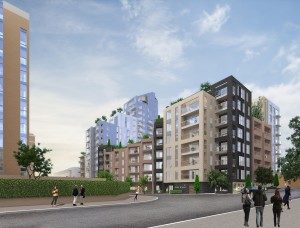 “We continue to consult with the local authority and the Hove Station Neighbourhood Forum on this.

“We are also committed to the provision of affordable housing and the improvement of the public realm in the area.”

Architects LCE, of Brighton, said: “The proposed development has been fundamentally designed to accord with the council’s vision for this area. 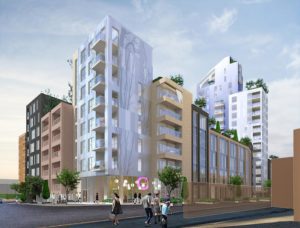 Matsim said that the flats would be well proportioned, with one, two or three bedrooms, and with access to communal roof gardens and allotments.

One resident said: “Given this is a rundown area where there are already tall blocks of flats and we’re desperate for housing, this looks like a promising scheme.

“It’s also worth a few bob to the council and I’m sure that won’t hurt its chances of getting planning permission.

“There seems to have been a reasonable amount of consultation although I’m sure it will still generate some opposition.

“It will be interesting to see whether we can finally expect something to start happening in what seems like a forgotten corner of Hove.”