Albion won by three goals to nil for the second successive match again seemingly without moving out of second gear.

Although the Seagulls had to soak up some pressure from the visitors early on, they were comfortable defensively. Niki Maenpaa made his league debut at last, over a year after joining the club. The Finland international looked comfortable but with little to do early on.

With Gaeten Bong penetrating down the left side, this allowed Albion to push forward and brought Oliver Norwood into the game more.

Norwood, preferred to Beram Kayal as Chris Hughton rotated his pack, looked accomplished and comfortable in the centre of midfield.

Rotherham were getting forward and Stephen Kelly hit a shot from the edge of the area that had Maenpaa beaten but fizzed over the bar.

It was soon afterwards that good possession from Norwood and the fit-again Dale Stephens enabled Anthony Knockaert to find the space to shoot from the edge of the area and see his effort squeeze home via Lee Camp’s outstretched hand and the post.

One up after 23 minutes, it was difficult to see how Rotherham would get back in the match.

Albion simply oozed class all over the pitch. Lewis Dunk, gracefully bringing the ball out of defence, looks more like Mark Lawrenson with every game. Liam Rosenior and Knockaert kept the attack alive. Rosenoir crossed in for Glenn Murray to side-foot a half volley past Camp. Even at this stage, with just half and hour gone, Albion were into an unassailable lead.

Stephens had the chance to make it three not long after but Camp turned his shot away.

Tomer Hemed and Knockaert both had chances to increase Albion’s lead before half time as Rotherham offered very little in return.

The atmosphere from the 25,000 or so in the Amex was excellent. And Albion again took the game to the Millers after half time. Just after Lewis Dunk received his first caution of the season, Kelly pulled Murray back inside the area. Ref Simon Hooper at first looked to see how play would develop then pointed to the spot.

Hemed rolled the penalty down the middle, although he might want to rethink the next one. If Camp had stayed still, he could have picked the effort up. 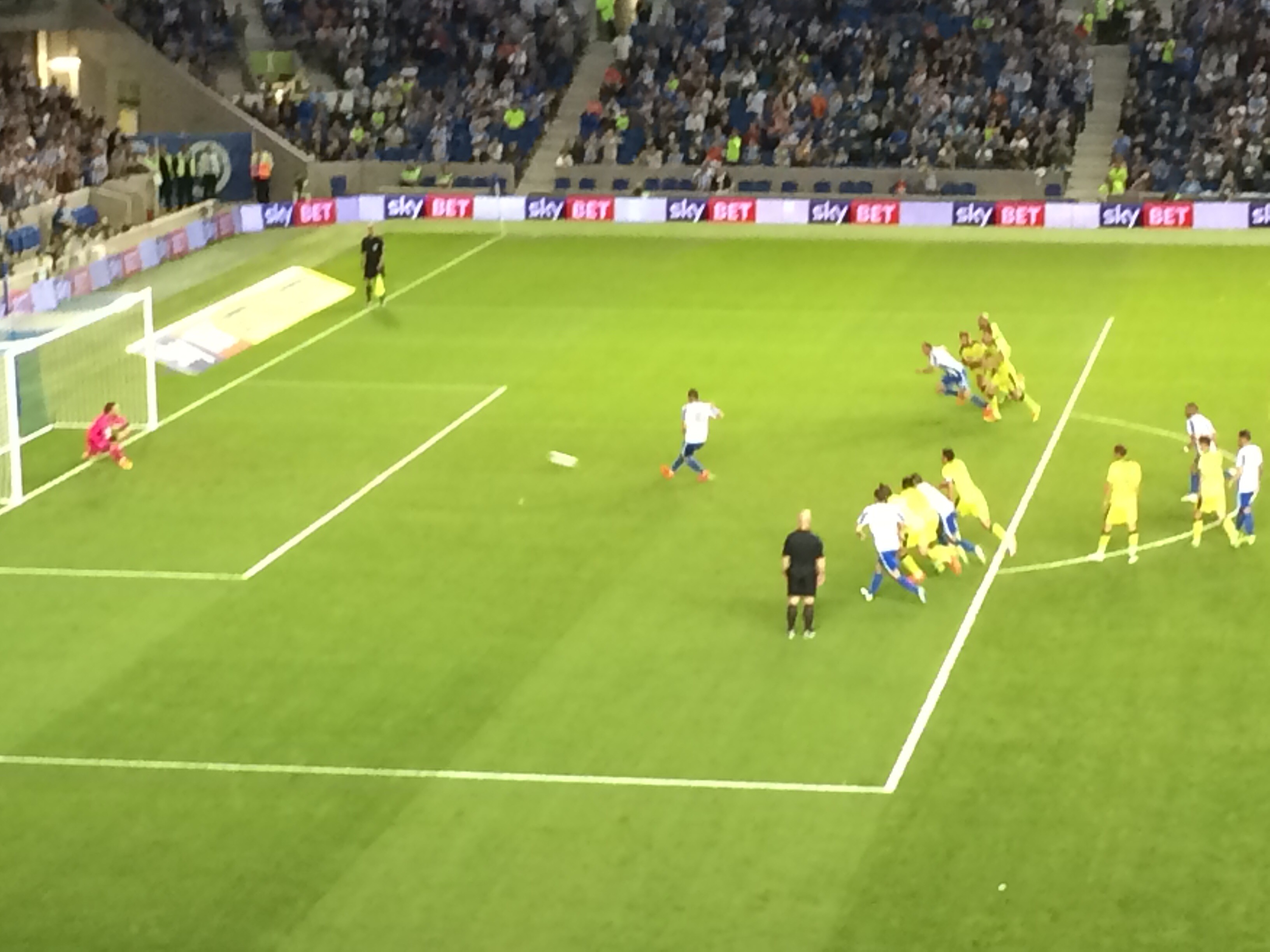 As a contest the game fizzled out rather.

Kelly had another go as Rotherham committed more men forward but Maenpaa was equal to it, making himself big and parrying the effort away.

William Vaulks strode forward and hit a 25-yard shot which swerved towards Maenpaa. The Finn brilliantly turned it way for a corner.

LuaLua tried to get more involved. He put in a couple of inviting crosses as did Jamie Murphy but neither Norwood nor Baldock could finish the job.

The match slowed down towards the end and Albion fans in the east terrace activated the lights on their mobile phones.

No one appears to know what instigated it or what it signified, not even the usually “in the know” fans’ forum North Stand Chat. Albion are top of the Football League on goal difference to Norwich, Huddersfield and Fulham. It’s a position they have occupied every August or September since they have been at the Amex except during Sami Hyppia’s ill-fated reign.

Tony Bloom will know that keeping Kayal, Stephens, Knockaert and Murray fit and in Brighton is key to achieving the objective – an objective soon to be outstanding for over 34 years.

Keeping Murray at the Albion could be a problem if, come the January transfer window, he is still banging in the goals and Bournemouth wish to recoup some of their investment.

Make no mistake, if the Albion had managed to persuade Eddie Howe and Bournemouth to allow Murray to have come on loan last January they wouldn’t have played tonight. And would have been on MOTD this weekend.

Albion travel to Reading on Saturday and play at Newcastle the following weekend with a League Cup visit to Oxford United in between.