Head teacher Richard Bradford said: “I am very proud of our students. They have been a fantastic year group who have worked incredibly hard and challenged themselves to do their very best. I am delighted that students of all abilities are celebrating excellent personal academic achievements in their exams today.

“I would like to thank the staff and parents who have done so much to support the students over the last few years. I know that because of this support, the students have achieved much more than academic success and leave school well equipped to take on the challenges they will face in the years ahead.”

Mr Bradford also praised the partnership between Brighton and Hove schools challenging each other and sharing best practice to raise standards.

Yian Zeng was the top performing student at Dorothy Stringer.  As well as achieving 13 A* grades at GCSE, she also secured AS results in philosophy and ethics and Chinese as well as an A in additional mathematicsFSMQ.

Twins, Jago and Annie Sherred were delighted because they got 17 A*, four A and three B grades at GCSE as well as an A in FSMQ additional maths between them. They will go to BHASVIC in September. 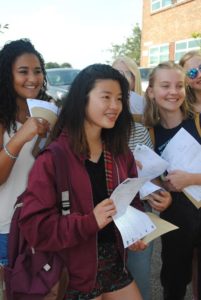 Zoe Alexander got ten A* grades and an A. She said: “I feel relieved and happy. I am very surprised as well. It was a lot of hard work.”

One of Zoe’s teachers said: “You could not get anybody who has worked harder for her results.”

Esme Madell was one of over 60 students to achieve at least eight A* or A grades at GCSE. She achieved nine A* grades and an A. These results were even more exceptional because each A* or A was three grades higher per subject than the national average and her expected progress based on her KS2 grades.

Esme said: “I am really shocked. I didn’t know what to expect. Some exams felt really bad. I want to be a doctor so I need really high grades.”

Commenting on the new national Progress 8 measure of academic success which shows Esme’s success and improvement so well, Mr Bradford said: “Early indications suggest that the progress made by students will be better than that made nationally. None of us will be satisfied until there is no gap in educational outcomes for disadvantaged young people in this city. We believe in the potential of every young person, and work daily to inspire, enthuse and improve progress for all students.”