Controversial posters calling on rail passengers to tweet the RMT with their frustrations over the shambolic service of the last few months have been taken down after a huge backlash – but Southern says it makes no apologies for the campaign. 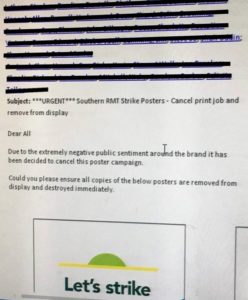 The RMT says one of its conductors was verbally assaulted this morning by a fare-dodging customer who shouted the campaign slogan “Strike Back” in his face.

Within hours of the campaign launch on Monday, which featured posters, tweets and a double page advert in the Metro urging people to tweet the RMT, Southern had been deluged with scores of tweets from angry passengers slating the rail company and supporting the union in its fight to stop the downgrading of the guard role with the introduction of driver-only operated trains.

Yesterday, a picture of an email instructing station staff to take down the posters was circulated, and today the RMT called on Southern to end the “despicable” campaign as it was putting staff at risk.

RMT General Secretary Mick Cash said: “This is a despicable and nasty campaign designed by Southern to set their workforce up for abuse and assault. It is incitement pure and simple and we are now seeing the consequences.

“Encouraging abuse of staff who are doing nothing other than standing up for passenger safety is a measure of this basket case outfit running Britain’s biggest rail franchise.

“We see today new advertisements in the newspapers regardless of the massive cost involved. It is estimated the campaign budget is around half a million pounds, money that could have been spent on keeping the guards and resolving the dispute.”

However, Southern remains unrepentant. A spokesman said: “We continue to run the campaign as can be clearly seen by the press ads that are running all week.

“Feelings were running high after day one of the campaign and we decided, having taken on board comments from some passengers, not to display the posters at stations.

“But we make no apologies for this campaign – our aim was to get the debate going and let people know the truth that our plans to modernise the railway will guarantee jobs, pay and safety and keep a second member of staff on board all the trains where we currently have conductors.”

In a letter to Charles Horton, chief executive of Southern’s parent company Govia Thameslink Company, Mr Cash said that a conductor was shouted at by a passenger on board the 7.10am Haywards Heath to Eastbourne train.

He quoted the conductor saying: “A member of the travelling public refused to buy a ticket and then confronted me by getting in my face saying
‘strike back strike back’.”

A BTP spokesman confirmed that it was aware of the incident, but no formal complaint had been made.