Fire has damaged a Brighton restaurant, the fire service said.

In a statement, the fire service said last night (Sunday 9 October): “East Sussex Fire and Rescue Service are at the scene of a fire at a Brighton restaurant.

“They used two breathing apparatus and a hose reel to tackle the fire. 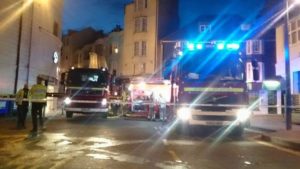 “As of 8pm two fire engines remain at the scene to ensure it is fully extinguished.

“There are no reports of injuries.”