A Brighton schoolgirl has won a national competition for a picture she drew to illustrate diversity and equality. 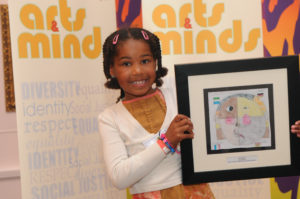 Eight-year-old Luisa Kamara from Queen’s Park Primary School entered her drawing One World into the Arts and Minds competition, which promotes race equality and diversity in primary, secondary and special schools.

Luisa won the primary artwork category and picked up her prize at a ceremony in London today.

The judges said of her artwork: “We are really impressed that someone so young can celebrate differences in such a clear way and capture diversity so simply yet portray it so well. The piece features a great use of language.”

Chris Keates, general secretary of the NASUWT teaching union which organised the competition, said: “Congratulations to Luisa, who clearly worked very hard to achieve her success.

“Every entry was highly creative and clever in its interpretation of the messaging behind the competition so the judges had great difficulty in choosing the winners.

“The quality of entries is a credit to the skills and abilities of the pupils and their teachers and support staff.

“The NASUWT is proud to organise the Arts and Minds competition which is an effective and enjoyable way of promoting and celebrating cultural diversity.

“The NASUWT wishes to thank every pupil and every school who participated and helped to make the competition such a huge success.”