The 23-year-old centre half put pen to paper on his new deal earlier today (Friday 14 October) after agreeing terms with the club yesterday.

Albion boss Chris Hughton said: “Connor had a great first season with us and particularly in the second half of the campaign when he was excellent.

“He has made great progress in his first year and earned his new deal. He thoroughly deserves it and I’ve no doubt he has a very bright future ahead with us.

“He has been a little bit unfortunate with injury at the start of the season but he is back to full fitness now and ready to seize his opportunity.” 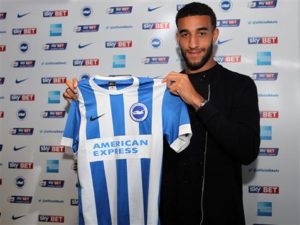 Goldson joined Albion from Shrewsbury Town last summer. Although he had to wait until December for his debut, he took his chance and established a rock-solid partnership with Lewis Dunk for the season run-in.

The Wolverhampton-born defender was a schoolboy with Wolves but made his professional breakthrough with Shrewsbury, playing more than 100 times for the Shrews. He has made 30 appearances for Albion, scoring two goals.