The city’s busiest bus route is set to be hit by a series of roadworks which could last for “up to a year”, affecting bus routes across Brighton and Hove. 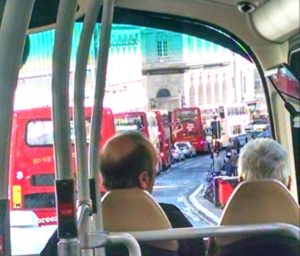 Bus stops on North Street had to be suspended for two days last week after congestion from nearby roadworks overspilled, delaying buses to and from all parts of the city.

Now, the street itself is set to be dug up by Southern Water to repair the surface and protect new water mains which were installed in 2009 after the new road laid then has already deteriorated.

It’s not yet known exactly when or how long the works will take – but with several sections needing strengthening and resurfacing, it is likely to stretch over several days and weeks.

Members of the Brighton Area Buswatch forum were told that the works could take as long as a year to complete. In its latest bulletin, chair Andrew Boag said: “This could take up to a year. The impact on buses could be huge, if it requires full closures and happens at the same time as Valley Gardens scheme.

“Fortunately, interested parties are all talking to each other so hopefully the works can be co-ordinated to minimise delays. Over a hundred buses an hour use North Street in each direction.”

The work is being timetabled to fit with other schemes, including the much-delayed Valley Gardens works – for which a final scheme is due to be presented to the council’s environment and transport committee on November 29.

Councillor Gill Mitchell, Committee Chair for the Environment, Transport & Sustainability Committee said: “We’re resolute that disruption will be kept to a minimum, and that the necessary work is carried out as quickly and effectively as possible. A final approach and timetable is currently being discussed.

A Southern water spokesman said: “We are working closely with Brighton & Hove City Council to coordinate a programme of important repairs on North Street – a key route in the city, particularly for buses and taxis.

“Our priority is to keep any disruption to a minimum, carrying out the necessary work as quickly and effectively as we can. We are currently finalising our project approach and timetable in discussion with the council.

“This will then enable us to share the detail of our plan with local businesses and other stakeholders for their feedback. All work will be carefully timetabled to fit with other developments and schemes. During the works, together with our council colleagues, we will make sure we keep the public, local businesses and other stakeholders fully informed.

“The work will see a number of sections of roadway along the length of North Street strengthened and resurfaced. Regrettably, reinstatement work dating back nine years has not proved to be as durable as was anticipated on a route which handles thousands of daily vehicle movements, including dozens of buses.

“The areas in question were originally excavated in 2007 when we replaced around 400 metres of ageing Victorian water mains in North Street. At the time, a range of approved techniques was used to ensure the time to reinstate the mains trenches was kept to a minimum, helping reduce the impact on the local area.”