A group of mathematicians have calculated the most efficient way to crawl your way around Brighton and Hove’s pubs as part of a map which covers the whole of the UK. 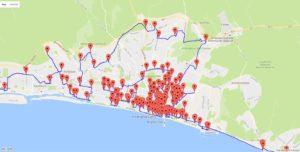 A group of academics from Canada used boozers listed on the Pubs Galore website and then mapped the coordinates before working out the shortest route which includes them all.

The crawl includes 185 of the city’s pubs – although there are some notable exceptions, including the city’s three Wetherspoons, the Pavilion Tavern and the first Brighton pub to be listed as an asset of community value, the Rose Hill Tavern.

However some of the city’s best loved pubs such as The Basketmakers, The Bevy, The Lion and Lobster and The Foragers are included.

The two-year exercise was an example of a well-known mathematical conundrum, working out the shortest route between any number of locations before then returning to the starting point, which is known as the “travelling salesman problem”.