The owner of one of Brighton’s most filthy takeaways has been banned from working with food and ordered to pay more than £7,000 in fines and court costs. 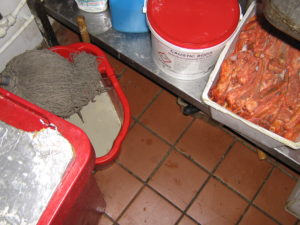 The New Lotus Takeaway in Dyke Road closed down in July, but by then Brighton and Hove City Council had levelled 47 charges against owner Jian Lin over how the kitchen had been run after a string of disastrous offences and a failure to clean up his kitchen to the required standards.

Yesterday, he pleaded guilty to three of these, two food hygiene offences relating to the cleanliness of the kitchen and storage of rice, and another charge of smoking while preparing food. The other charges were dropped.

Len Batten, for the city council, told Brighton Magistrates Court yesterday: “There has been a wilful blindness to the risk of offending but that risk has nevertheless been taken, and there is the potential for a serious risk of food poisoning.

“The council requests costs of £10,118.92, which includes environmental health officers’ time. Mr Lin is the author of his own downfall and the council fails to see why the council taxpayers should shoulder the burden of these costs.” 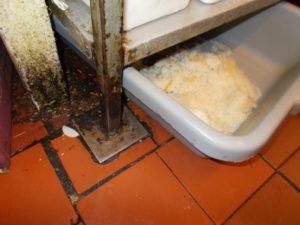 Defending, Ian Thomas said: “If the premises were so bad as [the hygiene inspectors] say they could have closed them down there and then.

“This takeaway clearly wasn’t up to scratch but was it quite as bad as they say? Although the council did a lot to help Mr Lin.

“Forty seven summonses is the most I have ever come across for a typical corner Chinese takeaway.”

He added that Mr Lin, who is not eligible for legal aid, had spent £8,000 on private legal fees as the number and scope of charges made a prison sentence a possibility, and made an application for the court to reimburse him as so many of the charges had been dropped.

He also said that many of the charges related to a period in autumn 2015 when Mr Lin was not the owner of the takeaway, having taken over from a Mr Wang on December 1, 2015.

In regards to the charge of smoking, Mr Thomas said that when the offence took place, Mr Lin had already agreed to give up the business and the lease and suggested that by that time he was “demob happy”. 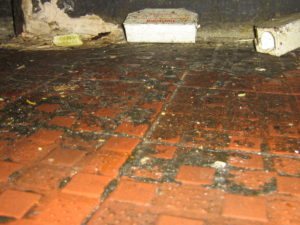 A filthy floor directly underneath the main food preparation counter

Among the things discovered by hygiene inspectors during a routine visit in April this year was food stored under the sink next to caustic soda and a bucket of dirty water, dirty food containers, cooked chicken being chopped on a board and with a knife used for chopping raw chicken, and rice had been left at room temperature for significantly longer than the two hour limit.

Mr Lin had previously been given a caution in 2008 over food hygiene offences, and in August 2012, he was given a notice of failing to prevent damage by pests because of an accumulation of rubbish.

In May 2013, he pleaded guilty to eight hygiene offences over a rat infestation at the takeaway, and was ordered to pay fines and costs totalling £7,300.