Thousands of people turned out to see hundreds of cars take part in the London to Brighton Veteran Car Run. 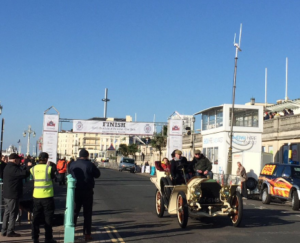 More than 400 veteran cars set off from Hyde Park in London to head to Brighton seafront to mark the 120th anniversary of the “Emancipation Run” in November 1896.

The original run to Brighton marked the speed limit being lifted from 4mph to 14mph and the end of the requirement for a man to go on foot ahead of the car.

Many of the drivers and passengers were decked out in period costume – with all the cars dating from before 1905.

This year’s event also marks 130 years since Karl Benz was granted the patent for the first car – the Benz Patent Motorwagen.