Next year’s Children’s Parade will be poetry in motion

The theme for next year’s Children’s Parade on Saturday, 6 May has been announced this morning as Poetry in Motion. 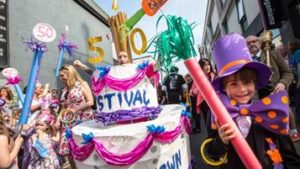 Each year, almost 5,000 children from schools and groups across the city join the parade, jointly produced by the Brighton Festival and community arts organisation Same Sky, the official launch of May’s festival. Previous themes, such as Take Flight, Metamophosis and the alphabet, have seen children dress up as everything from letters and Brighton street names to books, mermaids and even slices of cake.

Last year’s theme was Brighton celebrates, which prompted a flurry of Wheels, i360s, piers and local celebrities – including Disco Pete.

This year’s theme has been inspired by performance poet Kate Tempest, who is the curator for the 2017 festival.

Pippa Smith, Brighton Festival 2016’s Children & Family programmer says: “We are thrilled with this year’s theme and we are really looking forward to seeing the creativity of the teachers and the ingenuity which they bring to this annual celebration.”

Described by the Guardian as ‘one of the brightest British talents around,’ Tempest’s prolific artistic output across multiple disciplines has attracted her considerable acclaim and a unique range of audiences.

Having made her live debut as a spoken-word artist at just 16, Tempest is now equally well-known as a poet, novelist, musician and playwright.

In October, she was invited to perform her new album ‘Let them Eat Chaos’ in full on BBC2 as part of a specially-themed night to celebrate National Poetry Day.

One of the most spectacular community events in the UK, Same Sky spends six months working behind the scenes to create the event, with creative teams instructing teaching staff how to teach dance and parade chants, run free masterclasses, help develop design ideas and encourage imagination to flow.

John Varah, Artistic Director, Same Sky says: “Same Sky is very excited by the 2017 Guest Director Kate Tempest and her theme for the parade of children’s poems. We are creating a great parade with 70 Brighton and Hove schools to create Poetry in Motion.

“Each school will illustrate a favourite children’s poem and hit the street with dazzling costumes, puppets and sounds. Same Sky once again thanks Brighton Festival for giving us this great opportunity to work with nearly every school in our wonderfully creative city.”