Work on £1.65m revamp of Volks Railway begins with demolition of Aquarium Station

Work has started on a huge revamp of the Volks Railway which will see its stations rebuilt, original carriages restored and a heritage visitor centre constructed. 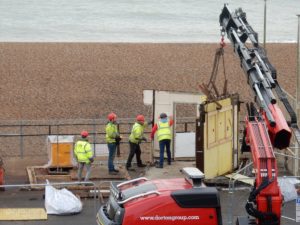 Diggers moved in on the Aquarium Station and car sheds last month, and it has now been completely dismantled by Lewes construction contractor Cheesmur.

This month, both will have their foundations completely dug out in preparation for the new buildings.

A spokesman for Volks said: “Although it is sad to see the old buildings go, particularly the remains of Magnus Volk’s station on the north side of the car sheds, they had reached the point of ‘no return’ and were in imminent danger of collapse.

“As part of the Heritage Lottery funding new buildings will be erected and these should serve the railway for a least another 50 years – perhaps even to the railway’s 200th anniversary.”

The facelift is being paid with by Heritage Lottery Fund money following a successful bid by Brighton and Hove City Council.

The work is expected to be finished in spring 2017, when the railway will start running again for the summer.

The Volk’s Railway was taken into council ownership in 1940. Since then teams of council staff, with support from dedicated volunteers, have kept the railway running right up to the present day.