A Brighton mother is suing Sussex Police for putting her in manacles and forcibly stripping her naked after she had made a 999 call for help.

The 33-year-old woman, who was suffering from post-natal depression and feeling suicidal, repeatedly begged officers to stop.

The ordeal triggered memories of being gang-raped as a teenager, she said, in a report in the Sunday Times today (Sunday 4 December).

And the Independent Police Complaints Commission (IPCC) criticised the force for the way that it dealt with people with mental health problems. In another case the IPCC criticised Sussex Police for forcing a “spit hood” on to an 11-year-old girl with a condition similar to autism.

The mother is suing the force for false imprisonment, assault, battery and breaches of human rights and equality acts”.

The Sunday Times said: “Shocking CCTV footage shows female officers from Sussex Police pinning down the 33-year-old while her clothes and jewellery are removed.

“The woman, who spoke to the Sunday Times on condition of anonymity, is suing the force. 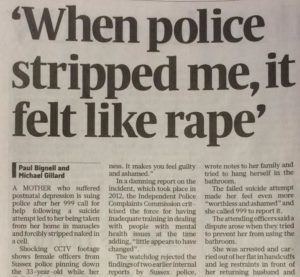 “She said: ‘I remember vividly the feeling of the moment they took off my pants. Being pinned down and stripped naked was like being raped all over again.

“‘Losing control and having to beg people to stop puts you in a position of absolute weakness. It makes you feel guilty and ashamed.’

“In a damning report on the incident, which took place in 2012, the Independent Police Complaints Commission criticised the force for having inadequate training in dealing with people with mental health issues at the time adding, ‘little appears to have changed’.

“The watchdog rejected the findings of two earlier internal reports by Sussex Police which exonerated the officers after the mother of one complained within days of her ordeal.

“The commission said the CCTV at the police station in Brighton undermined officers’ claims that the complainant had become volatile and unco-operative.

“Paul Budgen, the custody sergeant, should have faced disciplinary charges for misconduct but Sussex Police allowed him to retire during the investigation, the (IPCC) report said.”

According to the Sunday Times, the woman called 999 after a failed suicide attempt. But when officers went to her home, trouble erupted only after they tried to prevent her from using the bathroom.

She was arrested and carried out of her flat in handcuffs and leg restraints in front of her husband and placed face down in a police van.

“It felt like I was being kidnapped,” she told the Sunday Times.

She was held – naked – for 11 hours in a police cell in Brighton before being released.

The newspaper said that Sussex Police would be defending the legal claim and said that it “led the way” in its handling of people with mental health problems.