Police are appealing for witnesses following an assault in North Street, Brighton in the early hours of Saturday (3 December). 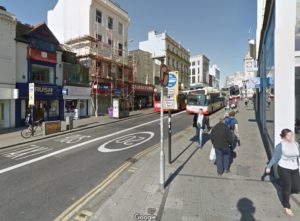 A 24-year-old woman from Hove was walking with a friend towards the Old Steine at around 4am when she was approached from behind and hit on the back of the head with a bottle, knocking her to the ground.

It is believed the suspect then stole her purple Ted Baker purse and blue asthma inhaler from her handbag.

Her friend, a 21-year-old man from Brighton, was punched in the face. Both victims were taken to hospital by ambulance although neither suffered serious injuries and have since been discharged.

Detective Constable Steve Anmer said: “We believe the suspect was part of a group of six or perhaps seven men who were all walking together down North Street.

“If you were in the area during the early hours of that Saturday morning and saw anything suspicious then please get in touch quoting serial 184 of 03/12.”

You can also report online to https://sussex.police.uk/contact-us/response-to-appeal/ or call 101.