Killer with links to Brighton on the run – £500 reward

Police have put up a reward for information leading to the arrest of a man previously jailed for manslaughter after punching a man to the ground in a drunken street brawl. 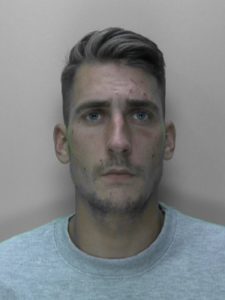 Rossi Michael Henderson, 28, was last known to be living at Anderida Road in Eastbourne but also has links to Brighton.

He is now wanted for displaying poor behaviour on release from prison and for allegedly committing further offences.

A £500 reward for information leading to his arrest and conviction put up last month has still not been claimed.

Henderson is white, 5ft 8in, of medium build, with short brown hair, blue eyes and facial stubble. He has a distinctive snake tattoo on his left arm.

He was jailed for five and a half years in April 2014 after pleading guilty to manslaughter just before he was due to go on trial for the murder of Lee Molineau, 46, in Eastbourne in July the previous year.

Henderson intervened after two women started shouting at Mr Molineau, punching him to the ground where he hit his head. He died in hospital a week later.

Anyone with any knowledge of Henderson’s current whereabouts is asked to contact 101@sussex.pnn.police.uk or call 101.