Fully electric buses are to be trialled in Brighton from the spring, with red London buses soon to be spotted along the 50 and 50U routes from Brighton city centre to Falmer via Hollingdean. 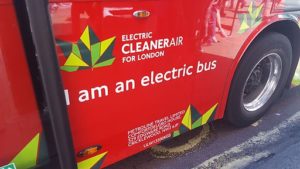 An electric bus on route in London. Picture by domdomegg

The Big Lemon was the first to announce it was to put electric buses on the city’s streets, with its two single deckers due to be trialled late next month.

Brighton and Hove Buses is also looking into the possibility, with a loan of a double decker buses shortly to arrive from London and expected to hit the road in April.

And if the trial proves successful, Brighton and Hove Buses may invest in a whole fleet.

Tom Druitt, managing director of the Big Lemon, said: “We have got two buses which have been created. They’re currently on trial in Sheffield and they should be in Brighton by the end of February.

“Then testing and trials and we are hoping they will be in service at the end of April.”

Martin Harris, managing director of Brighton and Hove Buses, said: “We are considering many options. We are exploring converting a number of diesel buses to electric, and we’re investing in micro hybrid buses which reduce diesel consumption and emissions.

“What we are really excited about, is the arrival of a fully electric demo BYD Volvo doubledeck bus which we can trial in the city very soon. It will be the same electric bus that is used in London. We need to see how this vehicle will cope with the city’s unique topography and high passenger loads, as it’s vital to match a vehicles capabilities to the profile of the route.

“We’ll shortly be welcoming a representative from BYD Volvo, who’ll be assessing our route profiles. He can tell us which bus routes would be most suited to the currently available fully electric buses.

“All being well, with a successful trial period, we could be investing in a fleet of electric buses for one of our city’s major routes in the not too distant future.

“Buses that will help us to take a hold of nature’s hand and protect our wonderful city.”

Brighton and Hove Buses already includes 13 hybrid diesel electric buses and the company is on track to achieve the council’s low emission zone target a year ahead of deadline. However, with buses contributing heavily to some of the city’s pollution hotspots, more needs to be done.

It’s estimated that the city’s bus takes about 50,000 cars off the city’s road every day.