They’ve done it! Brighton and Hove Albion promoted to the Premier League

At the time of writing it isn’t a mathematical certainty but as Huddersfield Town have to score two thirds as many goals as they have all season and win every match just to catch to the Seagulls, Brighton and Hove Albion are promoted and were promoted to the Premier League this afternoon.

The Seagulls made two changes to the team that beat Wolves on Good Friday (14 April). Both appeared to be tactical. Gaetan Bong replaced Seb Pocognoli and Beram Kayal came in for Steve Sidwell.

The Seagulls’ first chance fell to Lewis Dunk after Jakob Haugaard was unable to hold but his shot was smothered.

Albion took the lead after Dunk fired a long ball forward, Tomer Hemed won a header and knocked down for Murray, who slammed home his 22nd of the season to send the Amex wild and put Albion in front.

Murray got another soon after but Solly March’s corner was adjudged to have gone out of play first.

Albion, kicking towards the south goal, came out all guns blazing but it seemed to take an eternity before an Anthony Knockaert run saw the ball fall kindly for Solly March who fired home Albion’s second.

Wigan pulled a well-worked consolation goal back with a well-placed header from Nick Powell.

As the final whistle blew thousands from the lower stands ran on the pitch. 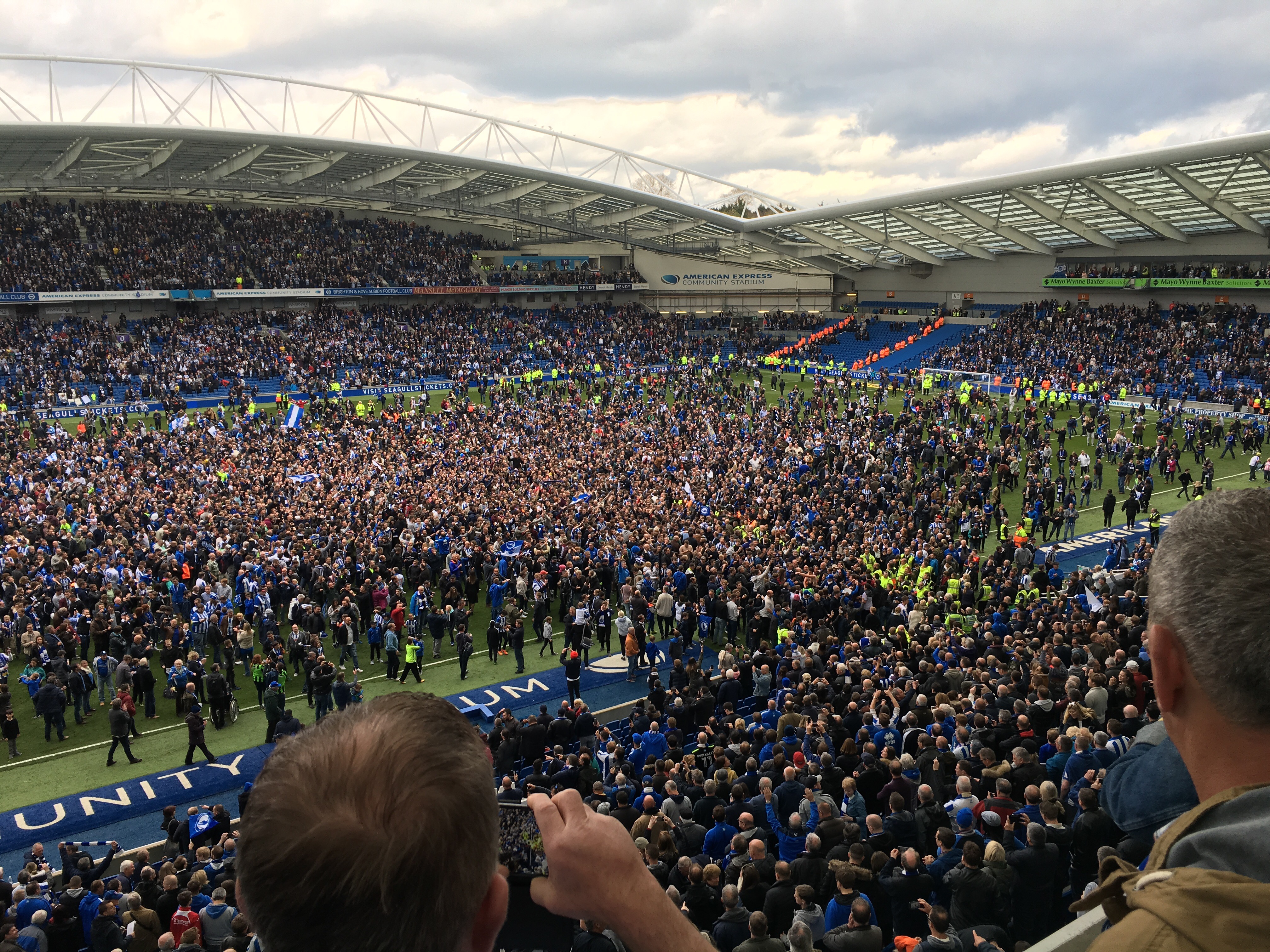 Albion chairman Tony Bloom described it as “truly amazing”. He said: “We’ve waited a hell of a long time for this moment.”

And Brighton and Hove City Council leader Warren Morgan, a lifelong Albion fan, added: “I’m elated and relieved. We are finally there. It’s been a long road since relegation from the top flight in ’83, and a hard one since the end of the Goldstone era 20 years ago.

“We wouldn’t be here now if it wasn’t for Dick Knight, Martin Perry, Tony Bloom and all the fans who fought to keep the Albion alive and into our new home at Falmer. Thank you.

“I will be proposing that Tony Bloom and Chris Hughton are awarded the freedom of the city in recognition of their achievement.

“Speaking as council leader, promotion to the Premier League could mean an economic boost for the city running into the hundreds of millions and puts Brighton and Hove on the sporting map globally.

“But as a lifelong fan, all that matters to me is that we are going up.