Brighton and Hove Albion player of the season? All of them – but Knockaert shades it … just

The spirit of the club was never more evident than when Albion hosted their annual awards dinner on Monday evening.

There was a wonderful atmosphere in the Mayo Wynn Baxter lounge as Albion players and Chris Hughton’s staff connected wonderfully with the all the guests and were given rapturous applause.

Solly March, who scored the crucial second goal against Wigan, was crowned young player of the year. He has also scored for England under 21’s this season.

The Fireworks Day strike was dedicated at the time to Anthony Knockaert soon after the death of his father Patrick.

Knockaert, David Stockdale, Lewis Dunk and Bruno were honoured again for being selected in PFA Championship Team of the Year. 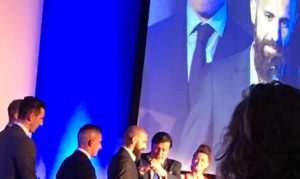 Knockaert himself won Player of the Season. The midfielder has had a inspiring season, as Albion claimed promotion with three matches left to play.

After the ceremony Brighton and Hove News asked Knockaert how he and his colleagues were preparing for one of the biggest matches  in Albion history this coming Saturday. 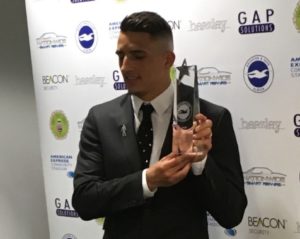 Knockaert said: “It was nice to win promotion but we are competitive and want more. And we are buzzing to do it at home so we can have another massive celebration with the fans” 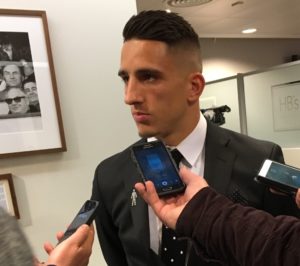 Albion kick off in an Amex sell out against Bristol City this Saturday at 5.30pm.