A man was stabbed in the centre of Brighton on Saturday night, Sussex Police said today (Tuesday 30 May) as they asked for help identifying him. 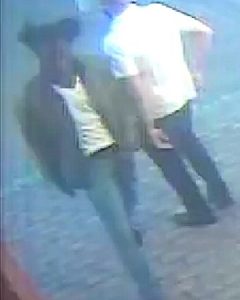 The force said: “Police in Brighton are appealing for witnesses after they were called shortly before 10pm on Saturday night (27 May) to reports of a man being stabbed in East Street.

“The victim, a 25-year-old man from Tadworth, in Surrey, was taken by ambulance to the Royal Sussex County Hospital where he was treated for a single stab wound to his back.

“He was discharged from hospital the next day.

“The suspect is described as a black man, 6ft and aged in his mid-twenties. He had his hair tied back into two buns and wore a grey hooded top.

“Anyone who was in the area at the time and may have information or recognises the man in the CCTV image is asked to contact police online at https://sussex.police.uk/contact-us/response-to-appeal or call 101 quoting serial 1480 of 27/05.

“Alternatively you can call the independent charity Crimestoppers anonymously via https://crimestoppers-uk.org or call 0800 555111.”