Two thieves are suspected of having stolen thousands of pounds from supermarket shoppers in Brighton and Hove.

Sussex Police issued a public warning today (Tuesday 8 August) and an appeal for information as they stepped up efforts to bring the men to justice. 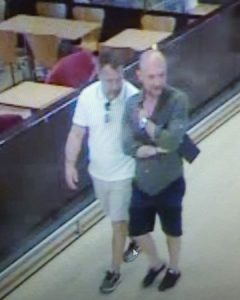 Across Sussex the thieves had managed to steal about £20,000 in more than 20 similar cases.

Sussex Police said: “Police are reminding supermarket shoppers across Sussex to be on the alert for thieves.

“This follows a recent spate of incidents in which supermarket customers and some other shoppers have been watched whilst entering their PIN numbers and have then had their purses and wallets stolen as they leave the store.

“Suspects then withdraw large amounts of cash from nearby cash machines before the victims are aware.

“The two men pictured, working with others, are believed to have been successful in obtaining nearly £20,000 by targeting victims in this way.

“Since November last year there have been 22 such reports in Sussex.

“The men in the photo, taken at Sainsbury’s in Worthing on (Tuesday) 20 June, are described as of Eastern European appearance, one bald and the other with dark hair.

“Anyone who recognises the men or who has any further information is asked to contact Sussex Police online or call 101, quoting reference 47170066290.

“If you see anyone behaving suspiciously in this way, alert store security staff or dial 999.”

Investigator Kayleigh Bartup said: “We are also working with the large supermarket brands to raise awareness about these incidents among staff and customers.

“Be alert and aware of strangers when shopping in large supermarkets and never leave your bag or trolley unattended at any point.

“Try not to be distracted by strangers and also be alert for any suspicious activity around your vehicle which you should keep secured.

“It appears that these men and others may strike up to twice a day in different towns and then lay low for a while so we need to maintain awareness even when there are no reports.”