Brighton Aldridge Community Academy principal Dylan Davies spoke of his pride as students recorded a 100 per cent pass rate at A level. 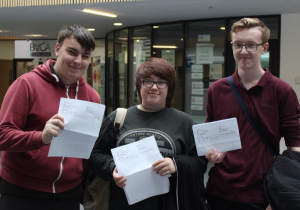 BACA reported that every A-level student achieved A* to E grade passes, with 37.5 per cent achieving three or more passes at A* to B or equivalent.

And 80.8 per cent of entries in vocational subjects received the highest grades of D* or D, up from 72 per cent a year ago.

The academy said: “All students were successful in securing their apprenticeships, university places and careers for the future.

Tristan Kibble achieved a double distinction star in creative media and a distinction star in entrepreneurship, which was gained in part through starting a successful business while still in his first year at sixth form. He plans to continue his education at the University of Bristol. 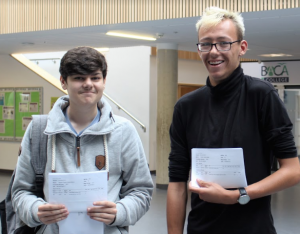 Hannah Lee will use her A in English literature to study at Portsmouth University.

She said: “The atmosphere (at BACA College) was welcoming and there was a real feel of community. I studied literature which I plan to continue studying at uni.”

James Fielden achieved a double distinction star in creative media which he will use for his level 6 apprenticeship – equivalent to a BA honours degree. 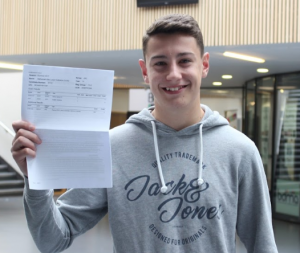 Mr Davies added: “We are proud of the passion and determination we’ve seen our students put into their courses. They truly deserve their successes.

“We wish each of them all the best as they progress on to achieve their career aspirations.

“We are also excited by our continually expanding offer that provides students with world-class sporting facilities, an award-winning specialist creative digital media academy, industry sponsored construction academy that offers apprenticeships – and access to some of the most successful sporting organisations locally and regionally.

“Our new partnerships with BIMM and BRICTT will add further opportunities for students to work and excel in the creative performing arts and music industries.

“The outstanding industry connections at BACA College help launch students into combining their personal passions with the apprenticeships, universities and careers they desire.”