Beautiful stencils at the 13th century St Peter’s Church at Preston Park will be restored and conserved thanks to a Heritage Lottery Fund grant of £64,000. 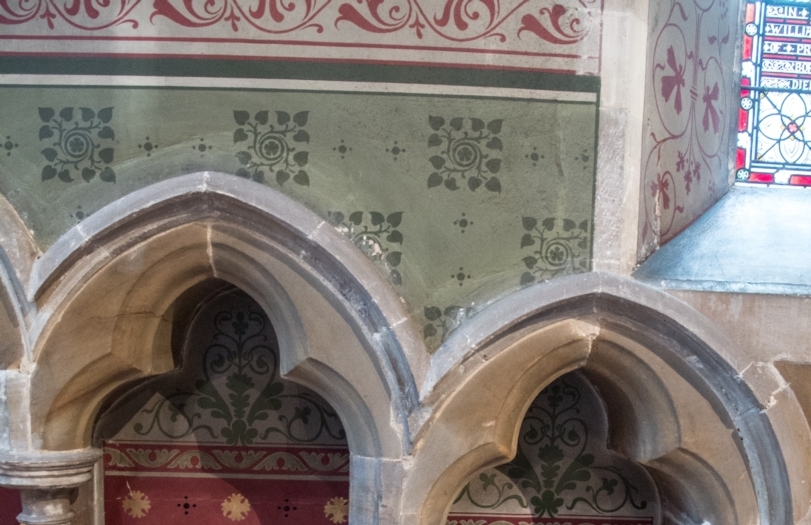 The Edwardian stencils were designed in a medieval style by Philip Mainwairing Johnston to replace the original ones which were lost in a fire in 1906. Three original paintings survived, depicting the Nativity, the Martyrdom of St Thomas of Canterbury, and St Michael weighing souls.

The year-long project also hopes to raise awareness of the Grade II* listed flint church, which claims to be the oldest in Brighton.

The grant was secured by The Friends of St Peter’s Church. Its chair, Caroline Bell, said: “We are more than delighted, we are over the moon, to have been successful in our Heritage Lottery Fund application as it’s something we’ve been working towards for years.

“The conservators will be cleaning the wonderful Edwardian stencilling that has been hidden under a hundred years worth of candle smoke and grime. We can’t wait to see the colours brought back to life!

“The funding provides for a whole range of exciting heritage activities and workshops for the local community to get involved.”

Mainwaring Johnston, who was also architect to Chichester Cathedral, designed an elaborate scheme of medieval designs and motifs, with heraldic devices, and a recurring motif of the keys of St Peter. The work was paid for by the Stanford Family, the owners of Preston Manor, which sits next to the church.

But after more than a century the original impact of the design, which is said to be striking, has been dulled by dust, grime and candle smoke.

It aims to engage local people in the heritage through a programme of free activities, workshops and events based around wall stencilling and their conservation. The overall aim is to promote the building as a community asset that is available for use and open to all.

Conservators Hare and Humphreys, who have worked on the British Museum and St Paul’s Cathedral, are carrying out the restoration and cleaning. and clean the stencilling.

Restoration work will start in early 2018 and take about four months to complete. St Peter’s Church will remain open during this time – the conservators will welcome visitors.

The Friends group also plan to collect and share the stories of people who came to St Peter’s before its closure in 1990.

They aim to develop the interpretation available in the church and online with more information about the church’s history. They hope to promote the Friends of St Peter’s as a custodian group, recruiting more volunteers and providing training to enable people to learn new skills and take on new roles in the group.

The small, flint-built church originally sat in downland, alongside the main route from London to Brighton, serving the village of Preston. In 1928, as Brighton developed, Preston Village and St Peter’s officially became part of the larger town.

Services were still held at St Peter’s until 1988, when the Diocese of Chichester closed it and in 1990 it was passed to what is now the Churches Conservation Trust.

The trust opens the church to the public every day from 10am to 3pm. The church is available for hire from the trust for concerts and exhibitions.

What is Brighton’s oldest building?

Is St Peter’s Brighton’s oldest building? It depends on how you define Brighton . . .

The oldest building in the original parish of Brighton is the 14th century St Nicholas Church on Dyke Road. Although the Domesday Book records a St Nicholas Church, valued at £12, the current Grade 2* listed church was not built until the mid-1300s. However, it was constructed using Norman stone – possibly from the original church – and an 11th century font has pride of place inside.

St Peter’s in Preston Park was the original parish church of the Preston parish, which for centuries was a village separate from Brighton. It too was mentioned in the Domesday book – but like St Nicholas, the church known by the Normans is not the church standing there today. In fact, the 13th century building is the third to stand on that land. Preston officially became a parish of Brighton in 1928.

The oldest building in the Brighton half of the modern city of Brighton and Hove is Grade 1 listed St Wulfran’s in Ovingdean, which dates from the 12th century.

And the oldest building in the whole city is Grade 2 listed St Helen’s Church in Hangleton, which also dates from the 12th century, with its chancel completed in 1100.