A man stole cigarettes in a knifepoint robbery at a newsagents in Brighton this morning (Tuesday 10 October).

It was the second armed robbery in Brighton in less than 24 hours although the incidents do not appear to be linked despite being less than a mile apart. 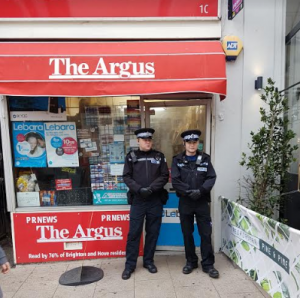 Sussex Police said: “At 8.25am on Tuesday 10 October a man entered PR News, in St James’s Street, Brighton, threatened staff there with a knife and demanded money.

“He then stole what is believed to be a small quantity of cigarettes and fled. No money was taken.

“A man walking past attempted to detain the suspect just outside the shop but he managed to break free and ran off down St James’s Street towards the Old Steine.

“Nobody was reported hurt during the incident

“The suspect is described as white, in his late twenties, slim with dark short hair and was wearing a blue hooded top.

“As he fled the knife was dropped into a nearby drain but has since has been recovered by the police.”

Witnesses can also contact the independent charity Crimestoppers anonymously on 0800 555111.

Investigator Andy Boyd said: “If anyone saw this incident or has any information please contact us online or by calling 101, quoting serial 200 of 10/10.”

They escaped with about £10,000 shortly after 3pm, heading off down Burlington Street towards the seafront.

Any witnesses or anyone with information is asked to contact contact Sussex Police online or phone the force on 101, quoting serial 846 of 09/10.