After a lacklustre start the Albion came agonisingly close to victory over Everton only for England legend Wayne Rooney to roll home a last-minute penalty after Bruno Saltor fouled Phil Jagielka.

Albion were pegged back by Ronald Koeman’s men for long periods of the first half. But the resolute partnership of Lewis Dunk and Shane Duffy stood firm against the mouthwatering partnership of Gylfi Sigurdsson and Rooney.

Everton’s only real chance of note came from a low rasping drive from Idrissa Gueye, which was tipped away by Maty Ryan.

Albion’s only first half-effort of note came from a well-worked short corner routine. Solly March knocked the ball to Markus Suttner who swept a cross into the penalty area. Anthony Knockaert’s effort was cleared away only as far as Dunk, who saw his shot blocked by Leighton Baines inside the six-yard box.

There were no other chances in the first half and not much to admire, aside from Rooney’s superb off-the-ball movement.

The Seagulls started the second half with much more vigour, Solly March striding past Morgan Schneiderlin on more than one occasion. But he was unable to find anyone with his crosses.

Both Nikola Vlasic and Dominic Calvert-Lewin were struggling to keep their feet. Vlasic ruefully looking at the Amex turf.

Albion’s goal came after a period of sustained pressure and a glut of corners.

From Bruno’s cross Jose Izquierdo tried to stab the ball goalwards. His shot was deflected and Gross managed to seize the loose ball and divert it to Knockaert, who snatched his first Premier League goal for the Seagulls. 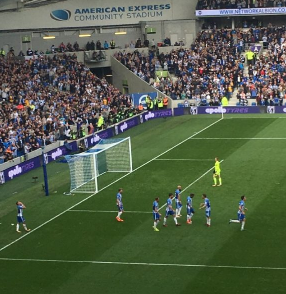 The Albion really had their tails up now. Izquierdo’s introduction had made a huge impact and he was showing the benefit of his pace.

The Seagulls should have had a second. After good work again by Knockaert and Bruno the chance just evaded a host of Albion players in the penalty area.

Duffy went off with what looked like a groin strain. Uwe Hünemeier came on and did well.

It was from a free kick conceded by Knockaert that Everton got themselves back in it.

As Bruno challenged so he appeared to elbow Calvert-Lewis. The referee, Michael Oliver, blew for a penalty with little appeal necessary from the Everton players. The fact that the referee had seen Bruno “wrestling” at corners in the first half can’t have helped.

Rooney shimmied and coolly sent Ryan the wrong way to equalise with a minute left on the clock. The striker was substituted before the teams restarted. 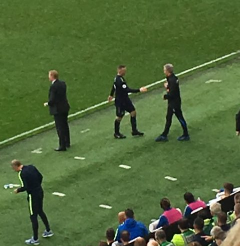 In the end the Seagulls might be relieved as during stoppage time Ryan made two stunning point-blank blocks from Kevin Mirallas.

Next for Albion a Friday night encounter at West Ham (20 October).