Brighton and Hove Albion have signed a promising young defender from a leading Irish club. 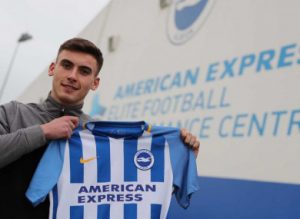 The club said: “Brighton and Hove Albion have completed the signing of Republic of Ireland under-19 international Warren O’Hora from Bohemians on undisclosed terms until June 2020.

“The 18-year-old moves to the Seagulls after a successful trial towards the end of 2017 and initially he will link up with the under-23 squad.”

Under-23 coach Simon Rusk said: “We’re pleased to secure the services of Warren, after he impressed during a couple of training sessions before Christmas.

“He’s had some good experience playing in Ireland’s Premier Division last season and he’ll certainly add to the competition we already have in central defence.

“We’re delighted to welcome him to the club and are keen to contribute towards his continued development as a footballer.”

The club added: “O’Hora progressed through the Bohemians academy system to make 11 appearances for the first team in Ireland’s top flight last season.

“The defender has also played for his country at youth-team level, most recently featuring for Ireland’s under-19s in their European Championship qualifier against Cyprus in October.”