By : Tim Hodges from the pre-match press conference
Comment: 0

Brighton and Hove News caught up with Albion boss Chris Hughton this afternoon (Thursday 18 January), as the Seagulls prepare for the lunchtime kick-off against current Premier League champions Chelsea at the Amex this Saturday (20 January). 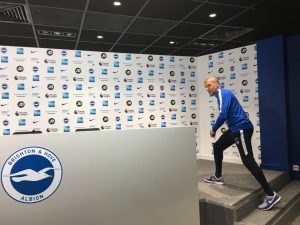 Albion have been a little goal-shy of late and our inquiries centred on the status of the seemingly out-of-favour Sam Baldock and the possibility of his inclusion in the starting line-up.

Chris Hughton told Brighton and Hove News: “We all know the start to the season Sam has had.

”But he is certainly looking sharp and good in training.

”Although he has broken down a couple of times earlier in the season, he has been fit for a while now.

”He hasn’t had the minutes the other front players have had but he is certainly free from injury and is available.”

Hughton was fairly tight-lipped on any possible inward transfers, reminding the assembled reporters that it isn’t proper to comment on any deals until they had been concluded.

The Albion boss was also keen to point out that he is guarded against being too adventurous and “flamboyant” against the top six, suggesting a more measured approach and top drawer performance are more likely to yield a positive result.