Albion have secured the signing of Netherlands international Jurgen Locadia from PSV Eindhoven.

The fee is thought to be in the region of £16 million, eclipsing the amount paid for Jose Izquierdo. 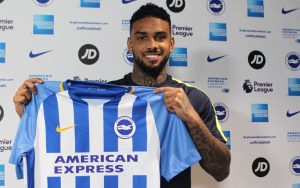 The 24-year-old has signed a contract with Albion until June 2022, having successfully passed his medical earlier today.

Manager Chris Hughton said: “We are delighted to have signed Jurgen and pleased to welcome him to the club.

“He is a player we have been aware of for some time and it’s been no secret we have wanted to add a striker of his type.

“He is a strong, powerful and quick centre-forward, with a real eye for goal and will increase our attacking options in the second half of the season.

“Jurgen already has a prolific goal record with PSV in the Dutch top division and it is one we hope he can continue here with us in the Premier League.”

Locadia began his professional career with PSV and hit the headlines when he scored a hat-trick when making his league debut as an 18-year-old substitute in a 6-0 win over VVV-Venlo in 2012-13.

Locadia has a total of 45 goals and 34 assists from 82 Eredivisie starts and 45 substitute appearances. He has netted nine times this season and provided an impressive six assists in 15 league appearances.

Locadia has also scored 14 goals in the domestic KNVB Cup and a further three times in European competitions for PSV. He has represented his country at all levels from under-17 to under-21.

He has also been called up to the Dutch senior squad three times but is yet to win his first full international cap. Locadia will wear the number 25 shirt for Albion vacated most recently by Bobby Zamora.