The Brighton Acoustic Session is to hand over to a new resident, Tom Evans, who will take on most of the running of the club. 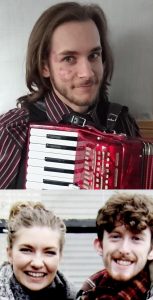 Evans will be joined at the monthly sessions, held at the Lord Nelson, in Trafalgar Street, Brighton, by Rowan Piggott and Rosie Hodgson when their touring schedule allows.

All three are former guests at the club where MC Mike Ainscough will be joined this evening (Monday 5 February) by Will and Wolfie.

Will Fly bought a guitar at the age of 20 and – some 50 years later – he is still playing and singing.

Over the years he has played and sung in many different bands and styles, from jazz to rock ’n’ roll and funk and back to folk.

Chris Wolferstan is a past master of flatpicking and also a fine exponent of fingerpicking in the style of Doc Watson and Merle Travis.

He has travelled all over the world, playing in places such as Spain, New Zealand and South America, before finally coming to his present base in Sussex.

The Brighton Acoustic Session is a folk music session held at the Lord Nelson on the first Monday of the month, with support from Hobgoblin Music and Harvey’s brewery.

Entry is free – although there is a collection – with the club’s website stating: “We are a roots music club. Most of the performers have a folk, bluegrass or country background, whether performing traditional or original material. We don’t use mics or amps!”

Referring to the new residents, the Brighton Acoustic Session’s Stuart Reed said: “Tom grew up in a family with a long involvement with folk music in Sussex.

“His dad is a regular contributor to local sessions and his multi-instrumentalist mum, Sue, is a pivotal member of the famous Twagger Band.

“An accomplished musician himself, he too can turn his hand to a variety of instruments and is involved in several musical projects.

“Rowan and Rosie are also from musical families, rooted in Ireland and Sussex respectively.”

Elvis Costello was wrong when he said ‘I Don’t Want To Go To Chelsea’ because we do!