Iron Chic open up UK leg of tour in Brighton 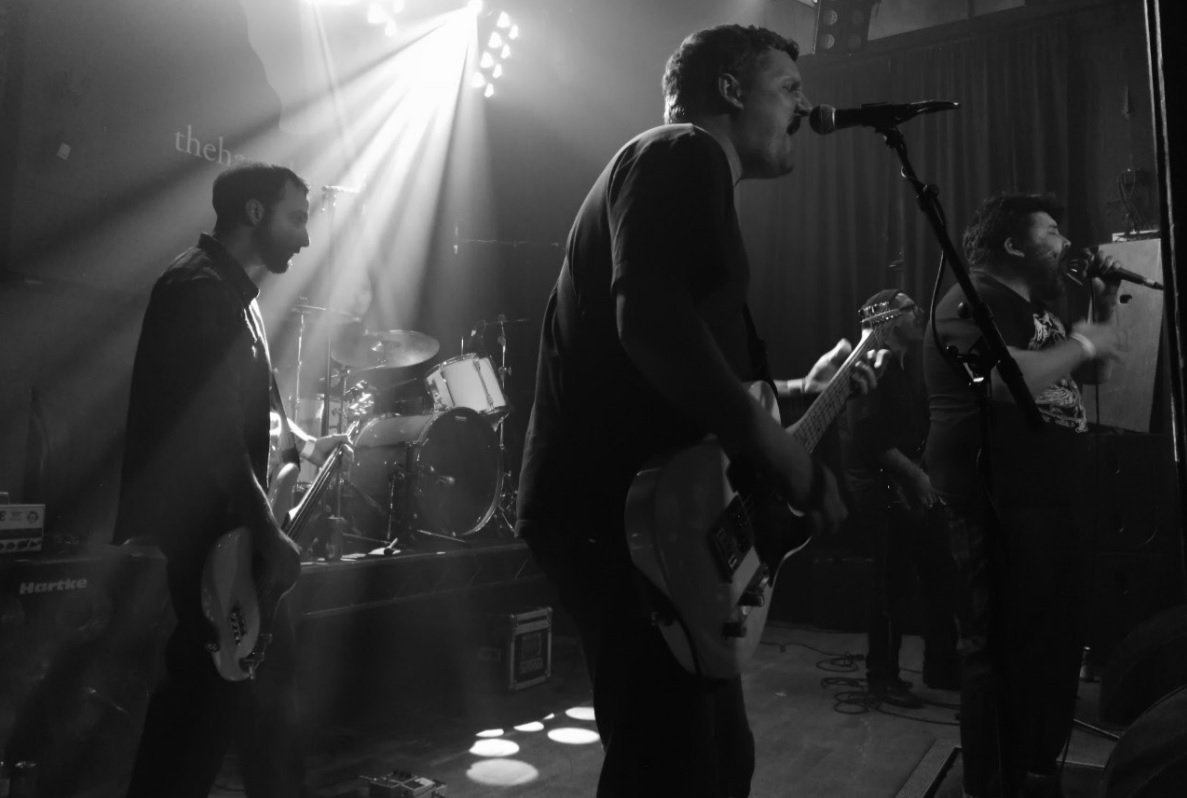 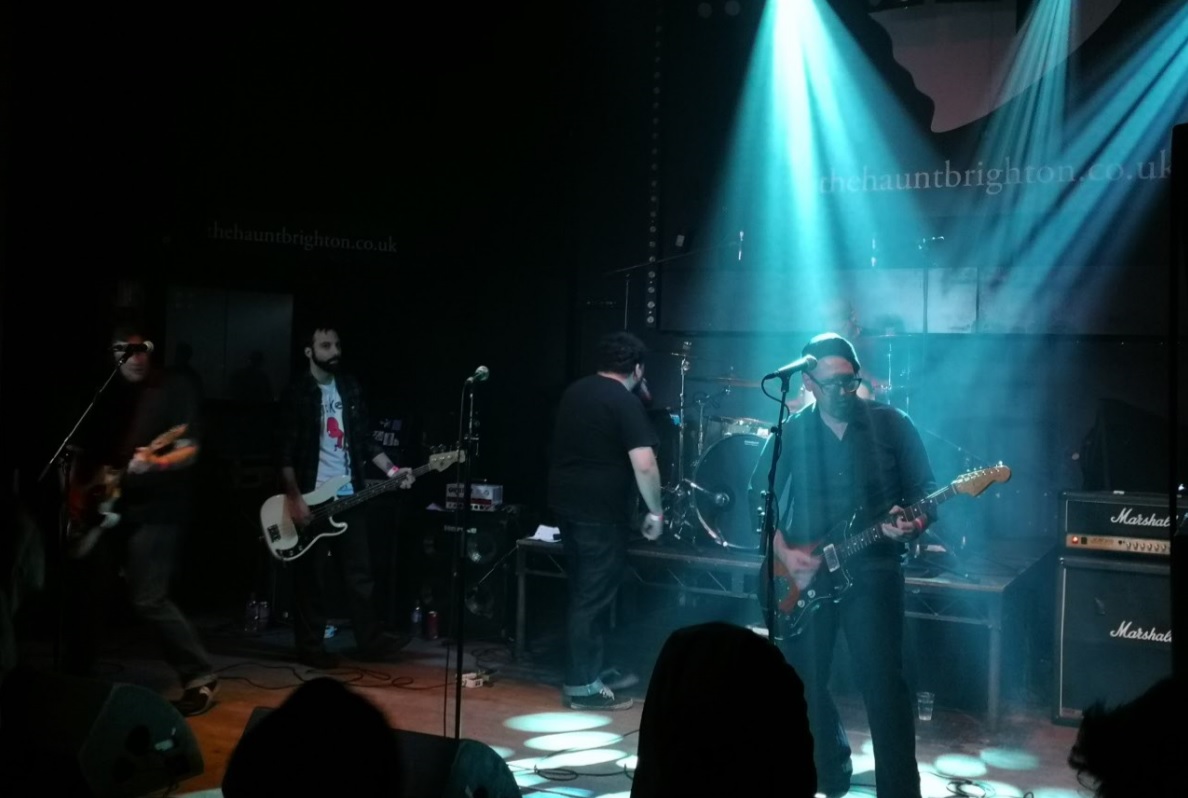 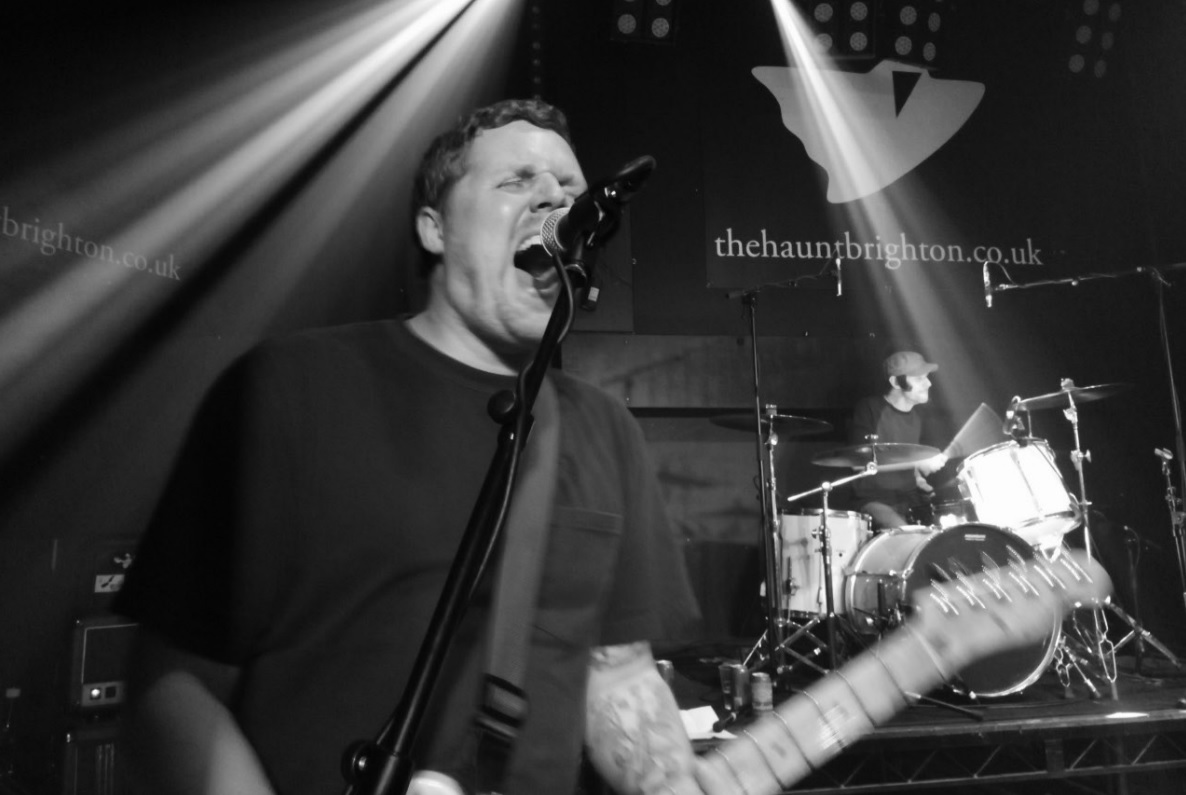 The guys first got it together back in 2008 and have so far released records on Bridge Nine Records, Dead Broke Rekerds and Side One Dummy. Their full-length albums have received positive reviews on several websites and their current release is the 11 track album ‘You Can’t Stay Here’ which hit the streets last October – I rather like the look of their oxblood red vinyl edition! 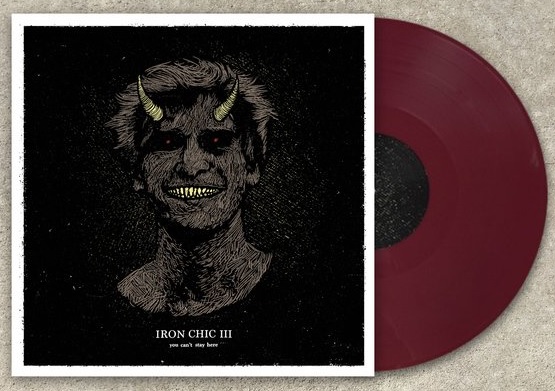 It’s not the first time Iron Chic have come to Brighton as they came over the pond and played at the Green Door Store a couple of years ago, which I understand was sold out. Tonight, the five-piece were getting it on at The Haunt and rather enjoyable it was too. I am not sure that the singer will keep up his on stage circuits of singing to crowd at the front then circling to the back to grab a sip of amber nectar and back to the front and back again for the whole 21 gig dates. 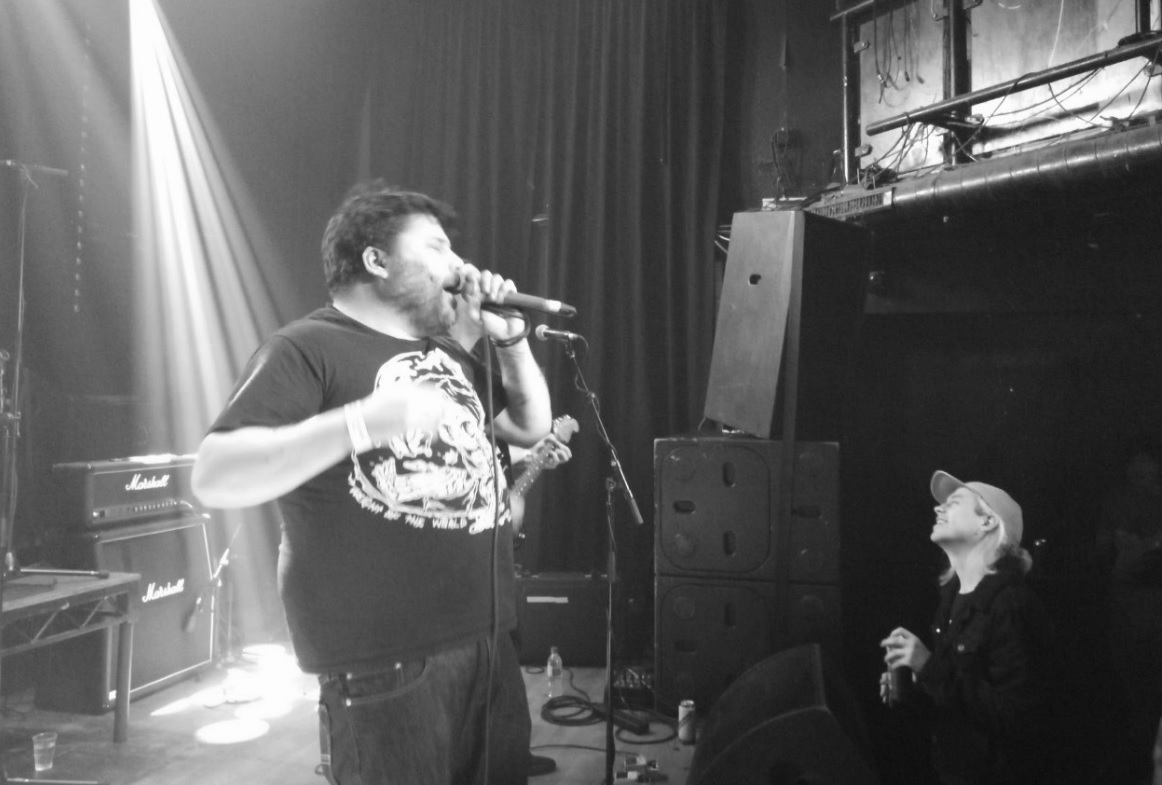 They were aiming at entertaining the eager punters with a dozen song set (see setlist below) but the crowd just wanted more and more, so I reckon we had at least 14 songs, eleven of which were: ‘Cutesy Monster Man’, ‘My Best Friend (Is A Nihilist)’, ‘Wolf Dix Rd.’, ‘Timecop’, ‘Every Town Has An Elm Street’, ‘A Headache With Pictures’, ‘I Always Never Said That’, ‘(Castle) Numbskull’, ‘Black Friday’, ‘Ruinous Calamity’, ‘Time Keeps On Slipping Into The (Cosmic) Future’. 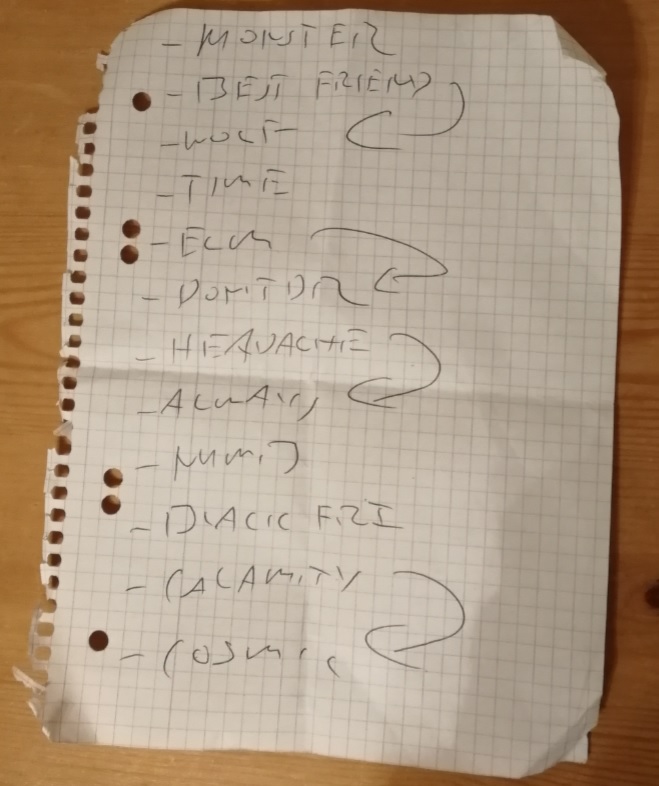 You can check out their website here http://www.ironchic.net/ and listen to what they sound like on their Bandcamp page, as there are 8 releases located there for you to enjoy: https://ironchic.bandcamp.com/ 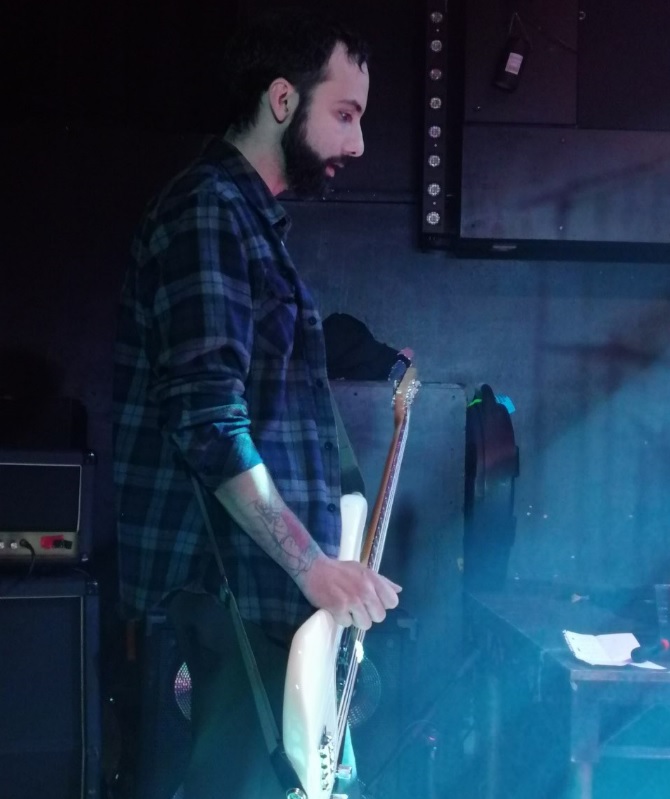 There was a quick turnaround of bands tonight and thus allowing for two support bands Colour Me Wednesday and Human Cell. 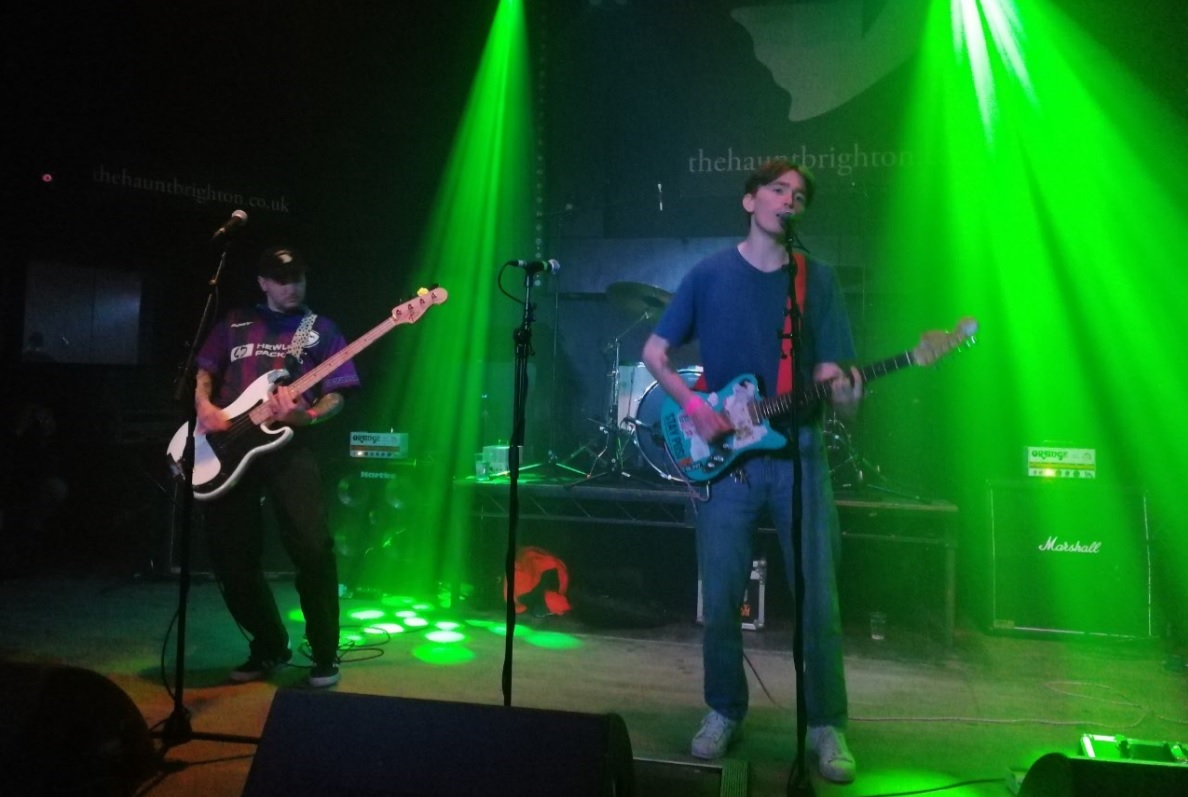 First up this evening was a new band called Human Cell. They are a Brighton trio consisting of Ted (guitar and vocals), Charlie (bass and vocals) and Sam (drums), who could easily be compared to Green Day with elements of Sham 69.

They were loud and their short set went down a treat with the punters. They have just released a cassette of their only work so far, which matches tonight’s setlist, which was: ‘Futile’, ‘Perspex’, ‘Brain Space’, ‘Human Condition’, ‘Even Out’. 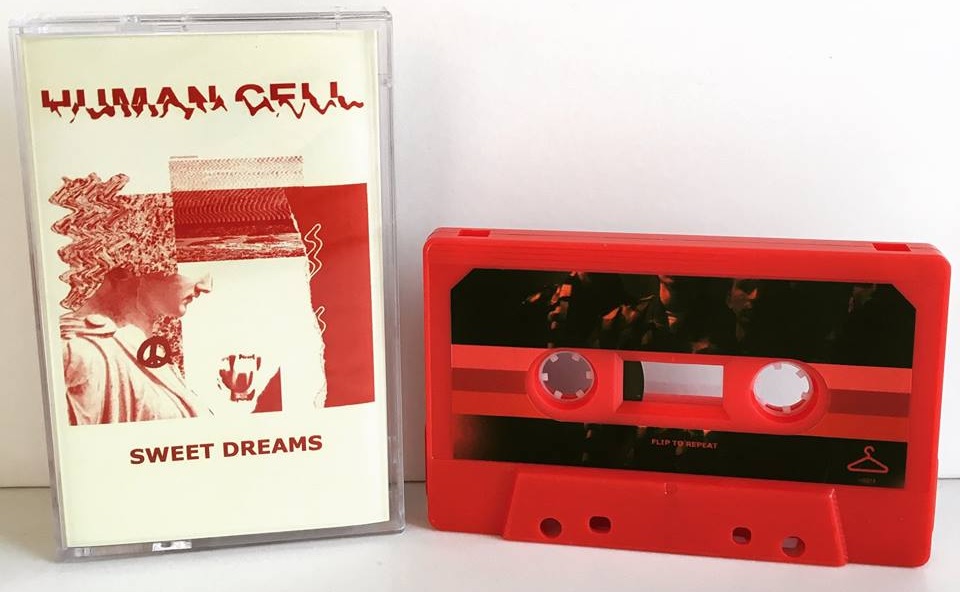 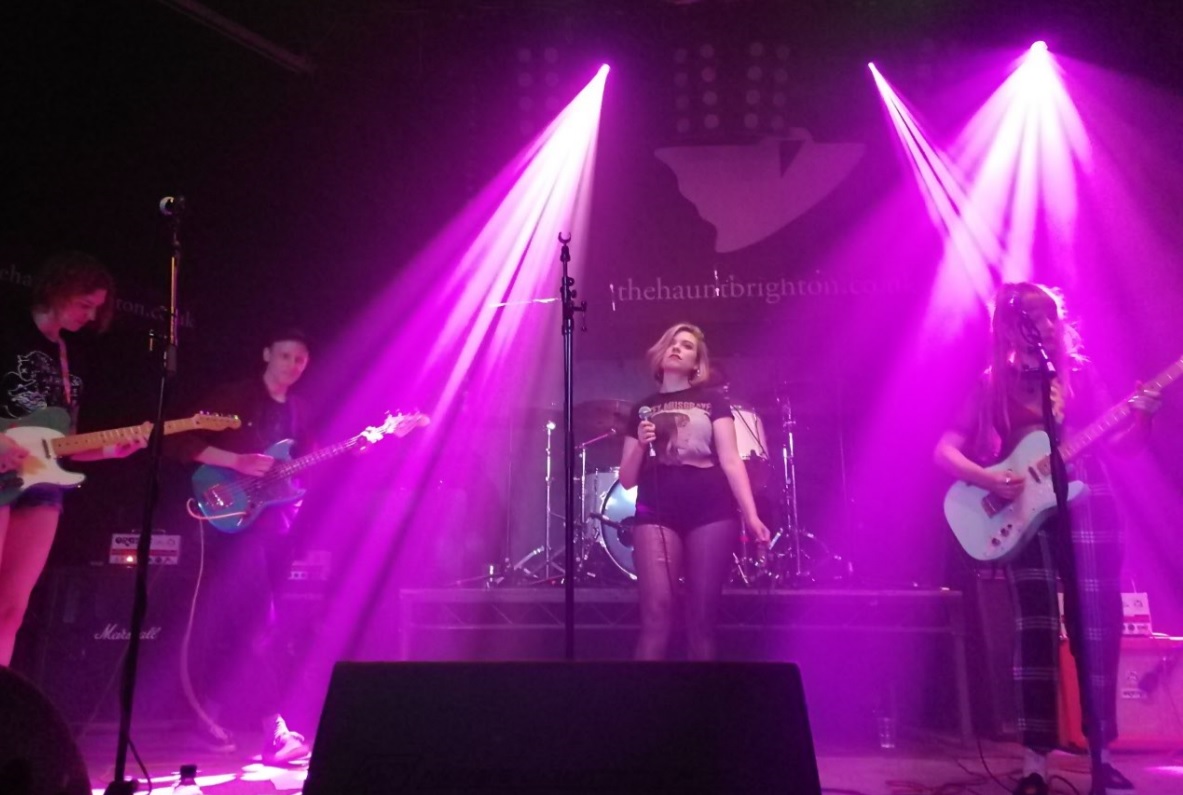 Colour Me Wednesday live at The Haunt, Brighton 17.4.18

The main support slot went to Uxbridge’s finest DIY intersectional feminist indie band Colour Me Wednesday, who are a band of four friends fronted by two sisters Jennifer and Harriet Doveton – although they appear as a five piece on stage, namely Harriet and Jennifer Doveton, Laura Ankles (also of Sugar Rush!) on second guitar, Dean Smithers (also of Doe) on bass and Jaca Freer on drums. 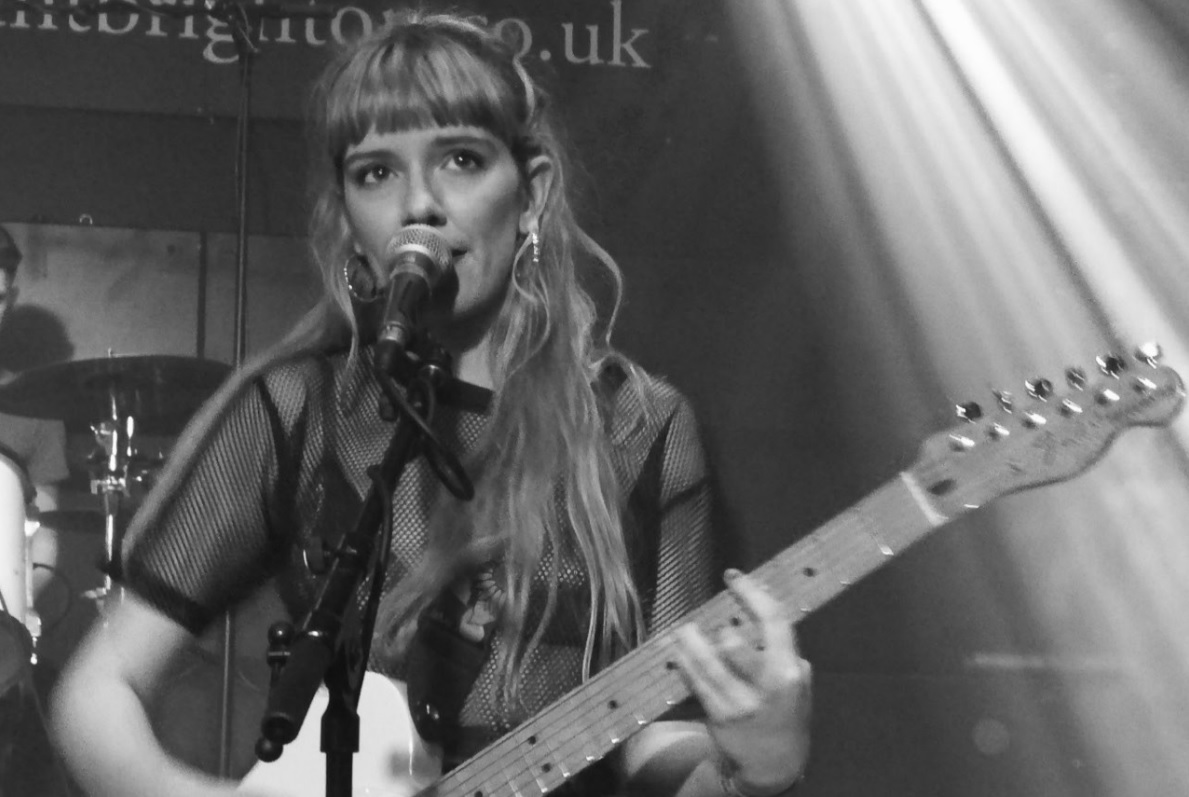 Harriet Doveton from Colour Me Wednesday live at The Haunt, Brighton 17.4.18 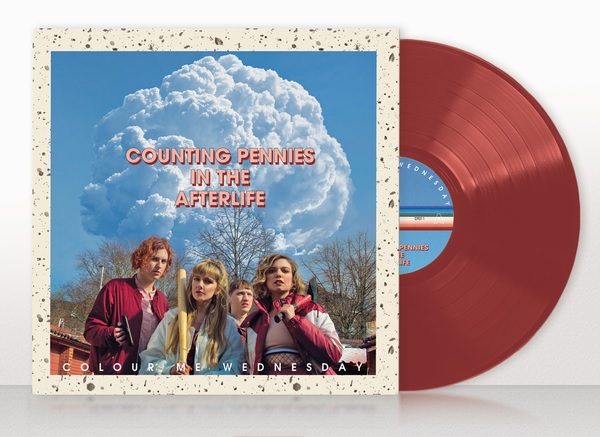 Colour Me Wednesday’s forthcoming album ‘Counting Pennies In The Afterlife’

You can pre-order it on vinyl and CD here: http://www.dovetownrecords.com/ 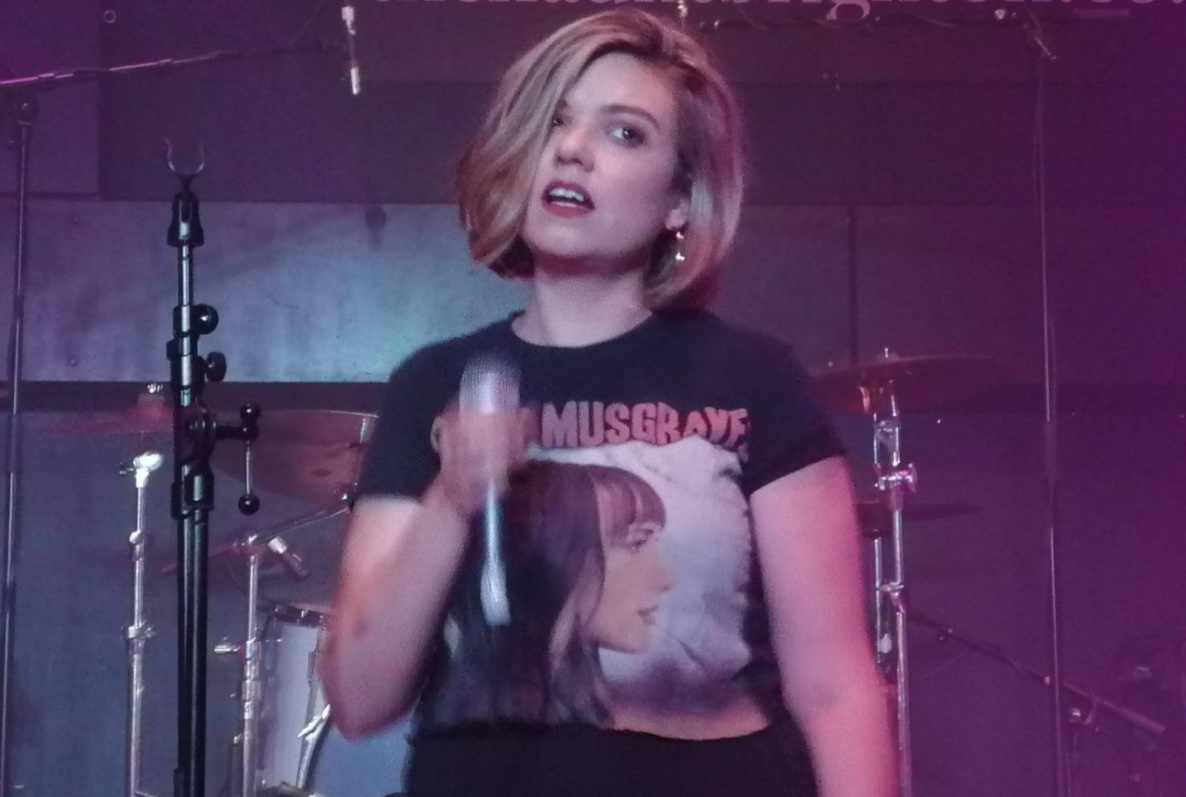 Jennifer Doveton from Colour Me Wednesday live at The Haunt, Brighton

The Doveton sisters are a hard working ladies as guitarist Harriet is actually Hat Tut from the awesome trio The Tuts (with Bev and Nadia) and Jennifer has been busy with her solo Baby Arms project. 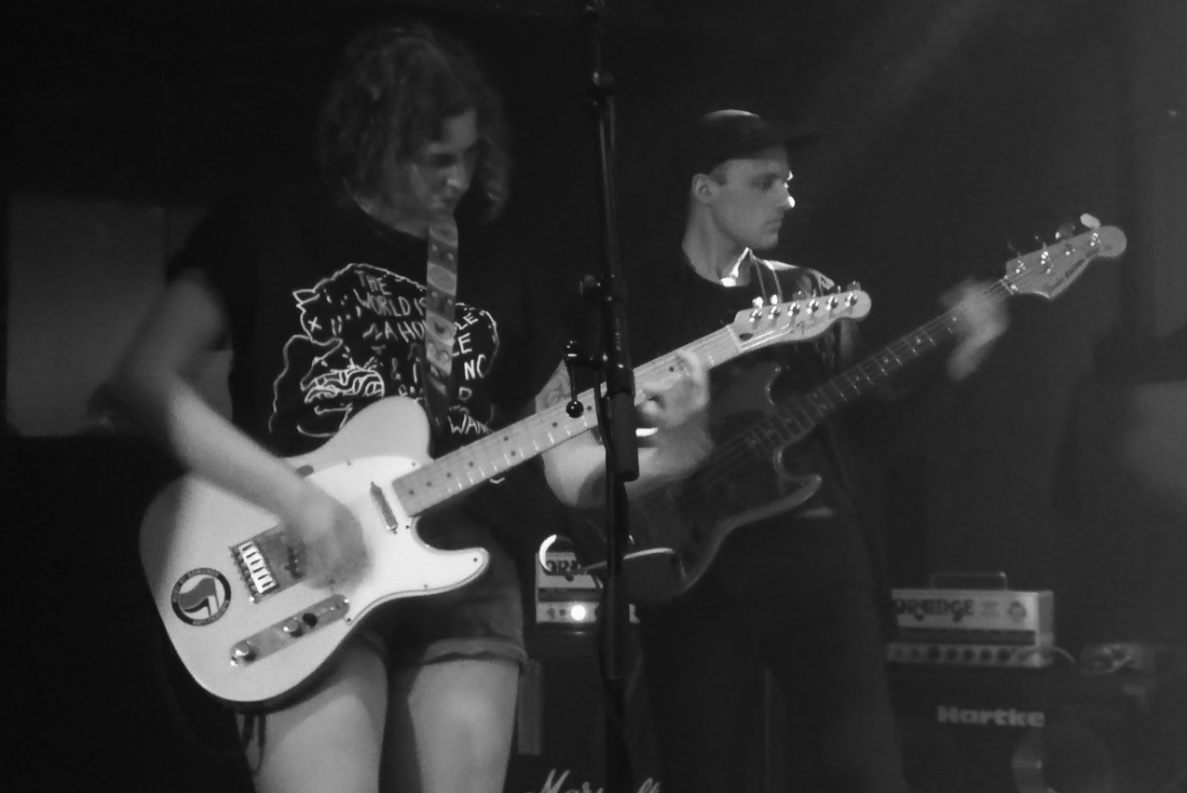 Colour Me Wednesday live in Brighton 17.4.18

Tonight we were treated to a wonderful nine song set from Colour Me Wednesday (see setlist below), which allowed outings for some new material from the forthcoming album, which signalled a continuation of top form. 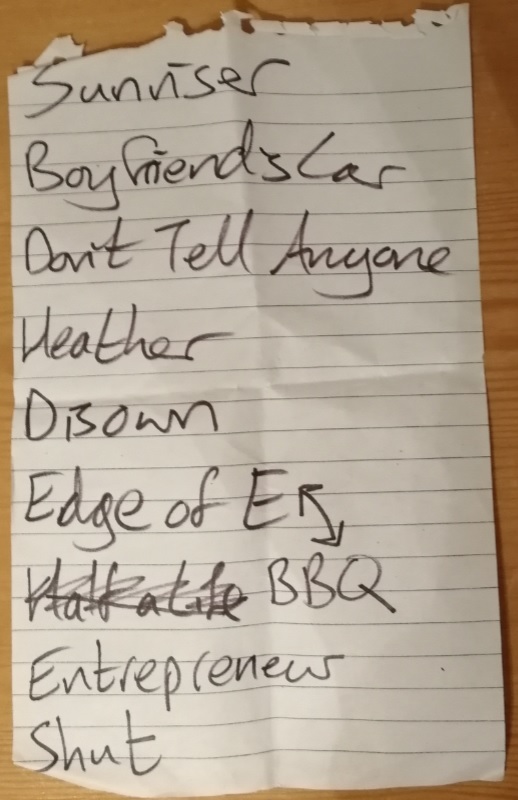 Colour Me Wednesday setlist from The Haunt, Brighton 17.4.18 gig 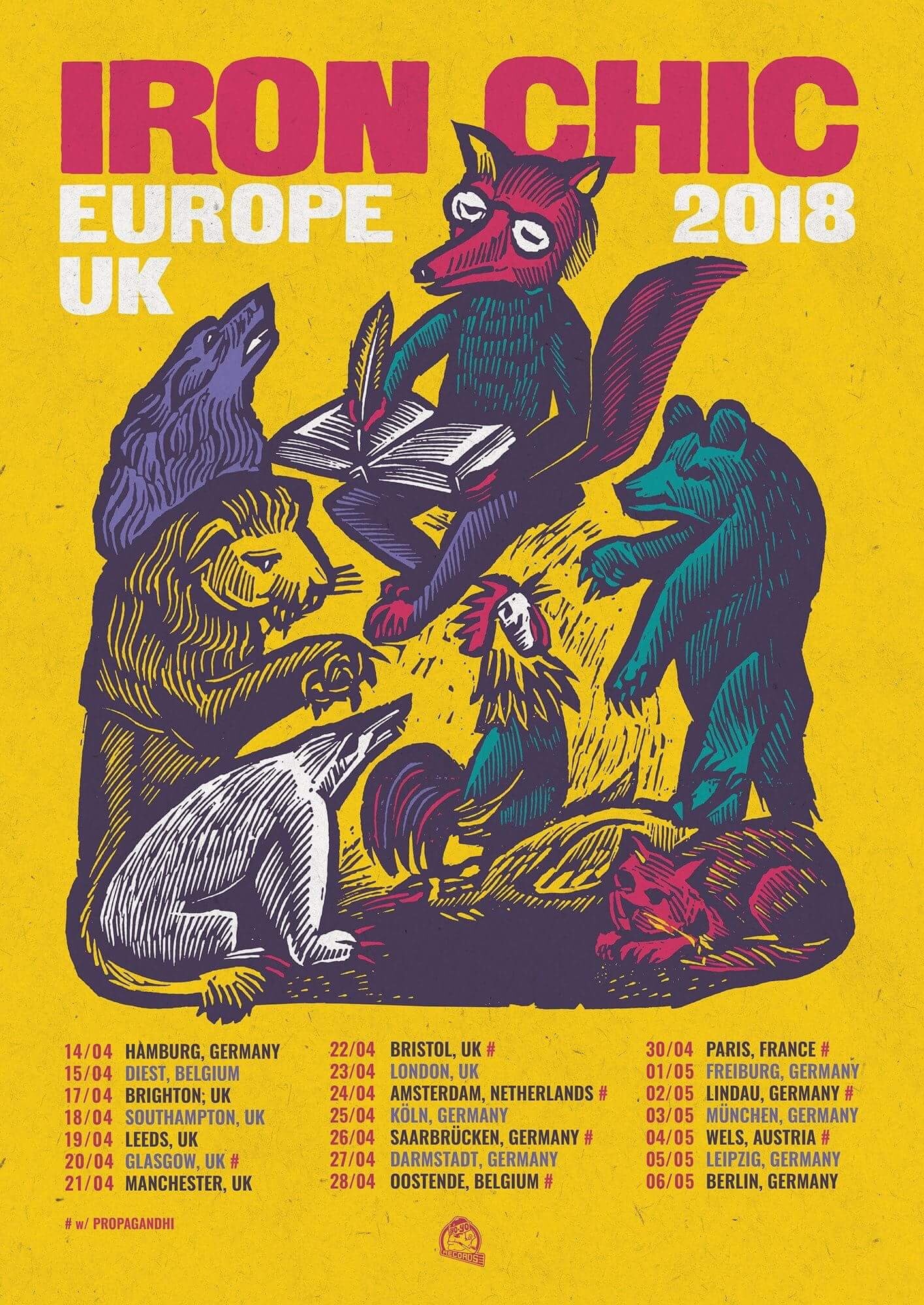