Five men have been jailed for a total of 67 years for drug dealing in Brighton and Hove after a two-year investigation by Sussex Police.

The force said that its detectives had “smashed a conspiracy which had trafficked more than 120 kilos of cocaine into Brighton and Hove”.

The men were jailed at Hove Crown Court on Thursday (27 September) for drugs offences and money laundering.

Detectives from the Serious Organised Crime Unit seized £23,000 cash at just one address when they carried out raids and made the first arrests last year.

Judge David Rennie said that each of the five men had played a leading role in the buying and directing of the sale of cocaine on a commercial scale.

Their “county lines” drugs operation was under investigation from March 2016 to July 2017 when detectioves made the first arrests.

He was sentenced to 10 years and was described as having a “significant role” in the chain as a supplier.

Ilirjan Hasanaj, 31, of Windermere Road, Bournemouth, was jailed for 17 years and Ilir Vakaj, 35, of Hampton Road, Teddington, Middlesex, was jailed for 16 years, having pleaded guilty to conspiring to supply cocaine and money laundering.

Hysni Tafa, 46, a builder, of Lea Bank, Luton, and Kujedesi Pista, 36, of Cardigan Street, Luton, had previously pleaded guilty to continuing the conspiracy to supply cocaine, from July 2017 to March 2018 once Aga’s activity had been disrupted by the police.

Tafa and Pista were both jailed for 12 years.

Judge Rennie said: “What lies at the heart of this case is an organised crime group run by you, Albanians. This was a disciplined, well-organised and sophisticated group of criminals.

“Your actions were vile and your trade despicable. Countless young lives were ruined just so that members of your criminal group could prosper.

“Unfortunately for you, you came to the attention of a group of detectives who themselves were disciplined, well-organised and sophisticated.

“On this occasion the police won and you lost. You are all going to prison for a substantial period of time”. 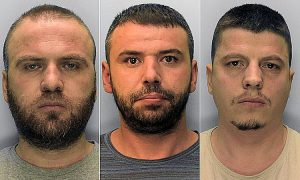 Nineteen lower level members of the group, whose role was street dealing, had previously been sentenced to terms of up to five and a half years, having also been convicted of supplying cocaine in relation to this case.

At the start of the trial the prosecution had offered no evidence against Aga’s partner, Remezije Selaj, 31, also from Trotwood, Chigwell. She had been charged with money laundering in relation to the proceeds of that conspiracy.

“During the period of the initial investigation there were believed to be 319,465 separate occasions when the ‘county’ drug lines were contacted.

“During the indictment period this organised crime group supplied 106kg to 165kg of cocaine, netting them in excess of £6.5 million.” 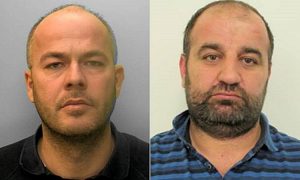 Sussex Police said: “‘County lines’ are operated by individuals or groups who use mobile phone lines to extend their drug dealing business into new locations away from where they are living, usually urban areas often centred around good transport links.

“Such an organised crime group controls a number of well-established mobile phone lines (in this case distinctive numbers that ended in 333 and 666 among others).

“These are the numbers that customers would call to arrange their purchase of cocaine.

“Those two numbers were manned by organised crime group workers who remained in a fixed location answering calls and texts 24 hours a day, seven days a week. This was the ‘call centre’.

“Once an order was received, those operating the ‘call centre’ would then use alternative mobile numbers to contact the ‘runner’ on the street.

“The information passed to runner was always limited, just a postcode of where to meet, and once the runner has met the customer, the runner texted the call centre a number, eg, 1, representing the number of deals that the dealer had supplied.

“The runner would then meet the customer and the drug deal would take place.

Cash seized during one raid

“The mobile phones used in such enterprises are often inexpensive phones that are simply discarded as and when the need arises. The phones are unregistered ‘pay as you go’ numbers that just require topping up.

“Thus the customer never had direct phone contact with the runner and vice versa. The customer would have been left with the impression that they were dealing with the call centre number and that it was that person they would be meeting.”

Detective Sergeant Graham added: “The whole purpose of system was to avoid detection when inevitably runners are arrested dealing drugs.

“The phones are rarely seized as they are physically in a different location to the runner phone, in this case the Cranford area, near Heathrow.

“Whenever seized and analysed by the police, the mobiles provided to runners rarely contain name or address details.

“This means that when runners are arrested the county line remains operational and another runner simply replaces the arrested runner.

“But our in-depth and covert investigation tracked the conspiracy down and in July 2017 we executed a search warrant at the call centre address in Waye Avenue Cranford, a converted garden shed underneath the Heathrow flight path.

“The investigation showed that those running the drugs on the street on behalf of the organised crime group had entered the country illegally, usually through clandestine methods. “Once put in contact with the organised crime group, they were supplied with a false identity, usually a driving licence, and a mobile phone.

“From there the runner was supplied a car that is registered to and insured in the false identity.

“Thus, if a runner is stop checked, on the face of their identity, car and insurance, they can seem to ‘check out’.

“The runners also supplied drugs to sell on behalf of the organised crime group.

“However, all this is not provided free of charge and runners were often ‘debt bonded’ to the organised crime group and worked to pay off their debt.

“The runners would also be responsible for ‘topping up’ the county Line numbers. In this case the lines would frequently be topped up in Brighton.

“This provided an extra layer of distance between the front line and the call centre so that when police attempted to track who topped up the numbers, the location of the line was not revealed.

“The runners would periodically be resupplied with drugs, and when such meetings took place the runner would give the supplier the money from the deals he or she had completed.

“In this case the method of supply to runners is strikingly similar across the network. Drugs would be wrapped in ‘deal wraps’ and presented to the runner in socks.

“Aga was one of the people that runners meet at various locations across Sussex. He supplied and resupplied runners with cocaine placed in socks that Aga purchased himself from supermarkets.

“Once in receipt of the runner’s money Aga and his partner Selaj would send some of the money received back to Albania (among other countries) using electronic money transfer houses.

“When Aga and others were arrested in July 2017 the ‘333’ and ‘666’ numbers were deactivated and we seized the controlling handsets from the call centre in Hounslow.

“Days later, however, the numbers were operational once more as drug lines and the enterprise was once again supplying cocaine to users in Sussex.

“Our investigation to uncover who was responsible and permanently close the lines was commenced as Operation Baku.

“Telecommunication evidence showed that the reactivated lines were being operated from an address in Luton by Tafa and Pista, and later moved to another one in the same town, and the volume of calls and deals approached that seen in July 2017 when we terminated the Hounslow operation.

“During the course of the ‘porting’ of the numbers the group experienced difficulties with service providers temporarily closing numbers and also making mistakes when dealing with the porting of the numbers, but Tafa and Pista managed to resolve these.

“However, in January 2018 we obtained a court Drug Dealing Telecommunications Restriction Order (DDTRO), the first force in the country to do so, in relation to the ‘333’ and ‘666’ numbers which were then closed down.

“We saw that clients were advised of new contact numbers via a text message and that Tafa paid for top ups to allow those messages to be sent.

“In March 2018 we arrested Pista at the Luton ‘call centre’ in possession of several phones and sim cards.

“The sim cards from the original ounty lines system, shut down by the DDTRO, were recovered from this address together with the information relating to the ownership and control of one of those lines. Also recovered were the new ‘replacement’ drug line numbers, and controlling handsets.

“The arrest of Tafa followed in April 2018, after he returned to the UK from Albania. When we searched his address we found a further phone (ending in 555) and the packaging for the 888 replacement sim card, together with other phone handsets used to contact service providers when the organised crime group experienced problems with the porting of the numbers and one of the handsets previously used to operate the 333 line.

“Our investigation, spanning two years, has now completely dismantled a complex drug dealing operation by an organised crime group, which was supplying cocaine on a daily basis in Brighton and Hove.

“Of course this success does not mean the end of such criminal activity in the city but we continue to put organised crime on the back foot and send them the message that we will continue to go after them and prevent them from becoming established in our communities.

“But the investigation continues, as we are currently compiling a case for proceedings against the defendants for court orders under the Proceeds of Crime Act (POCA) to confiscate those amounts and further criminal assets that we are seeking to identify.”