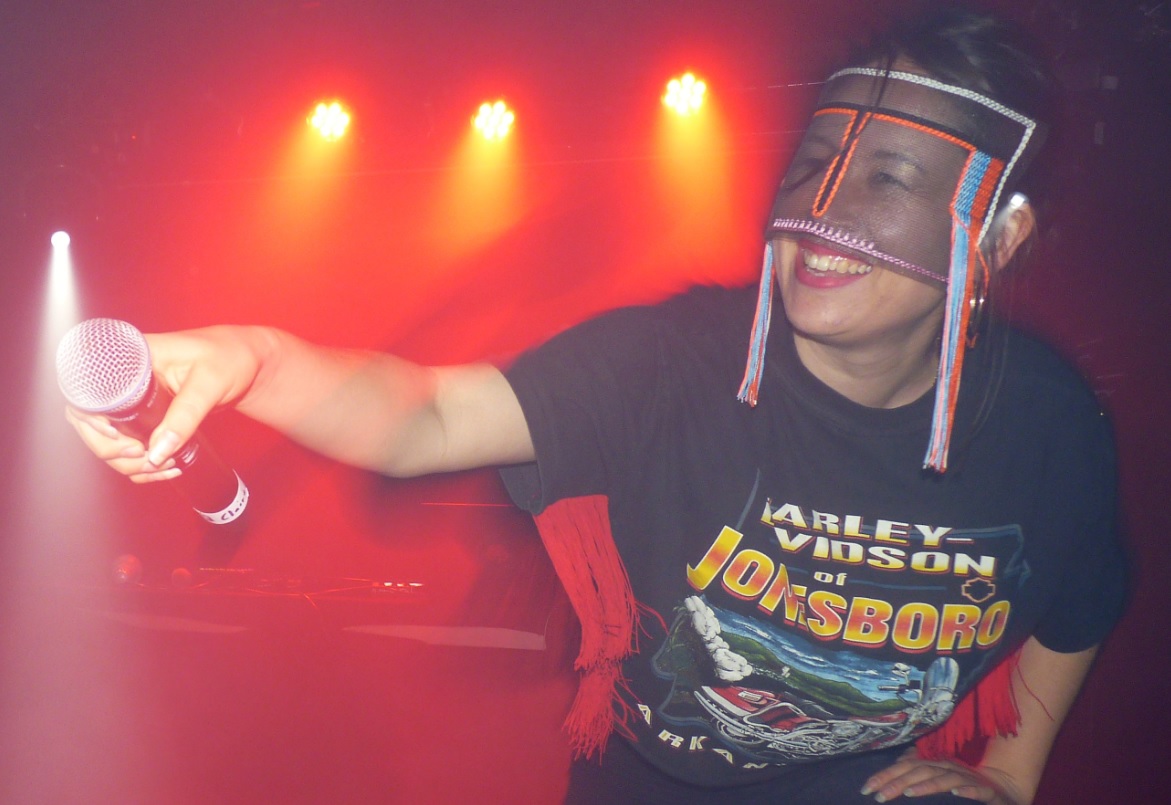 Brighton’s superb annual new music festival, The Great Escape, heralds the pathway for so many varied up and coming new acts from across the globe. Last May as part of this exciting event, the Brighton & Hove News music team were treated to a seriously catchy and uplifting modern dance music set at the Komedia in Gardner Street by the unusually named Australian all girl trio Haiku Hands. The packed crowd were seriously bopping for all of their 25 minute set. They were fantastic and so we really wanted more! 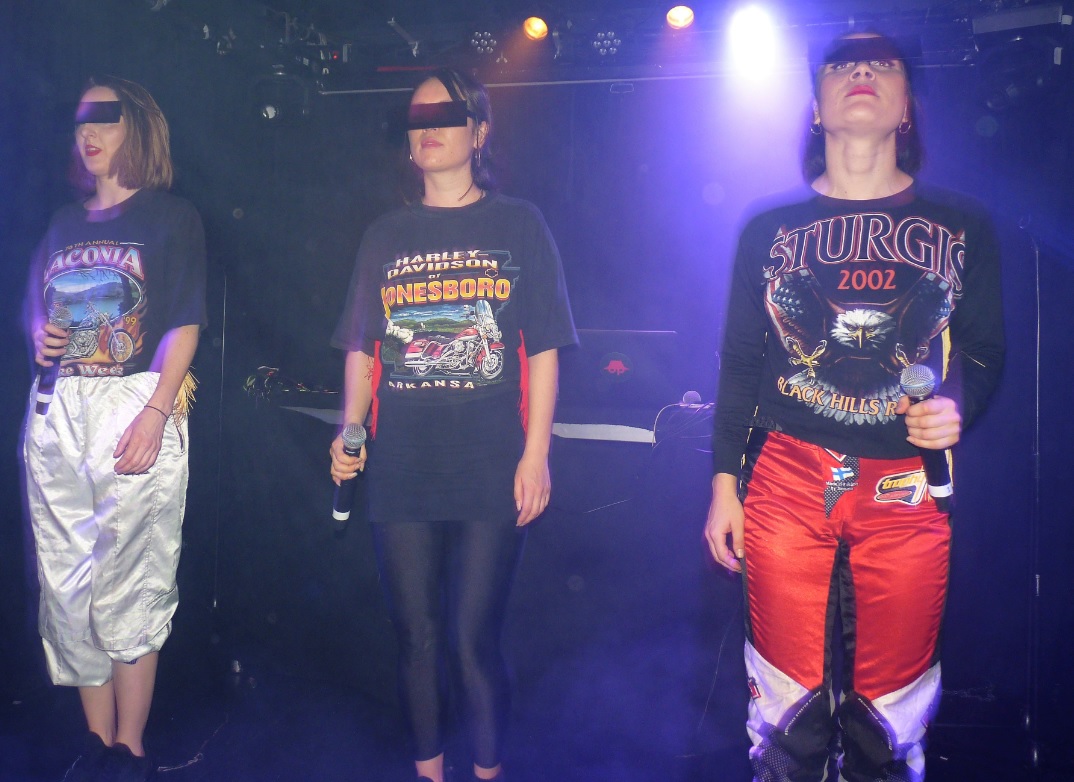 Having witnessed no less than 41 acts between us at The Great Escape, we ranked Haiku Hands performance in the Top 5 and so any excuse to see the ladies perform live again was a must. 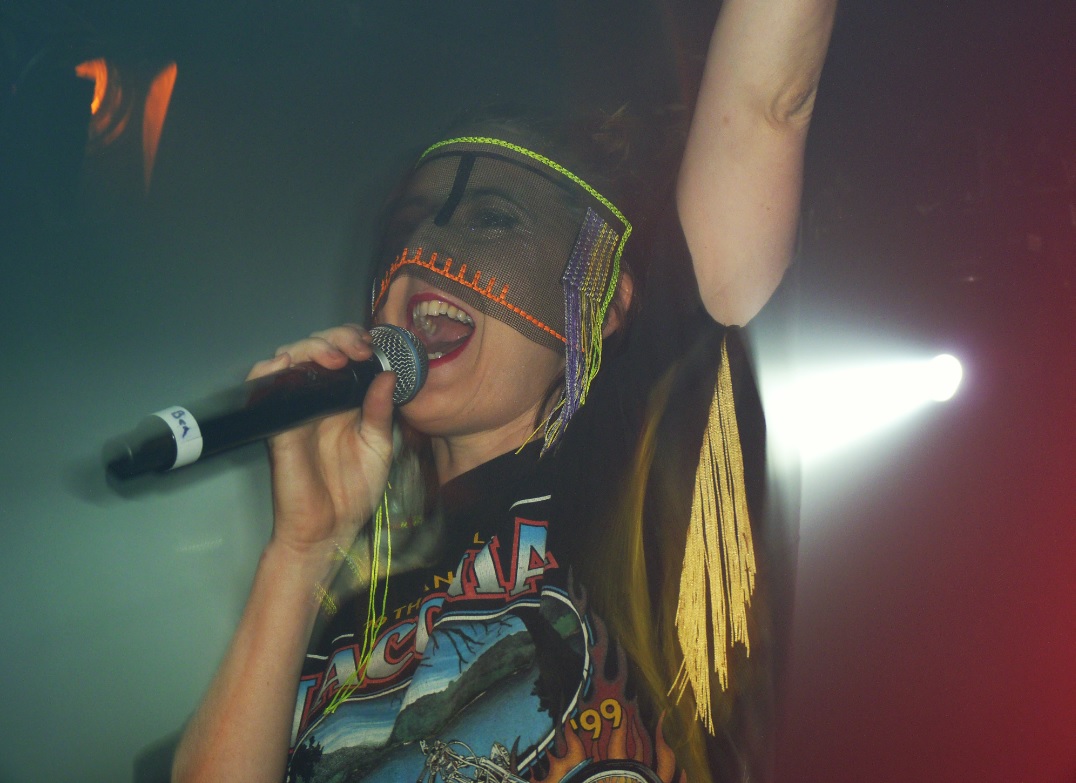 It appears that all of a sudden Australia is fast becoming a hotbed of young musical pop/dance talent with the likes of Brisbane’s brilliant Confidence Man and Sydney’s Haiku Hands. Both acts are certainly more than entitled to be banging down the doors of the UK Top 40 singles chart. All it needs to take is for the public to cast their musical net away from the States and head down under, as they will surely be missing a treat or two. 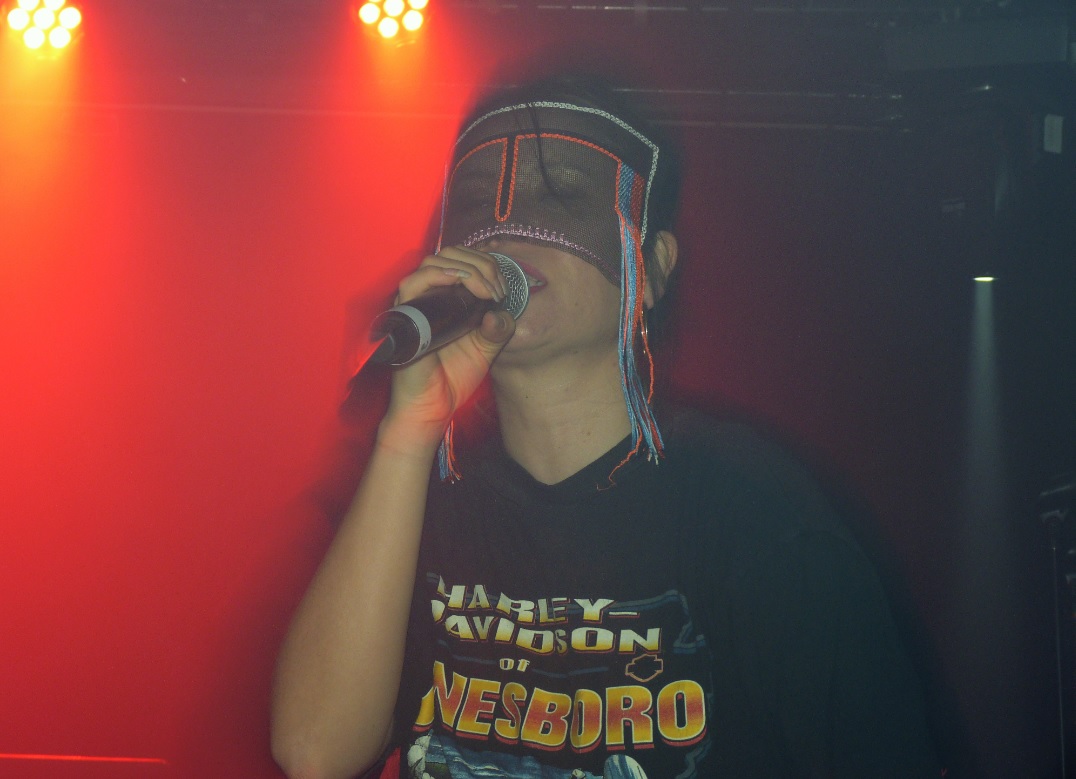 Mie Nakazawa, Claire Nakazawa and Beatrice Lewis make up Haiku Hands (although
Mataya Young and Joelistics aka Joel Ma have been or are also involved), and on the face of it, people might wrongly assume that these ladies are just front of stage dancers that (superbly) jig around the stage to a musical backing track that they have been given by some mysterious producer – Wrong! 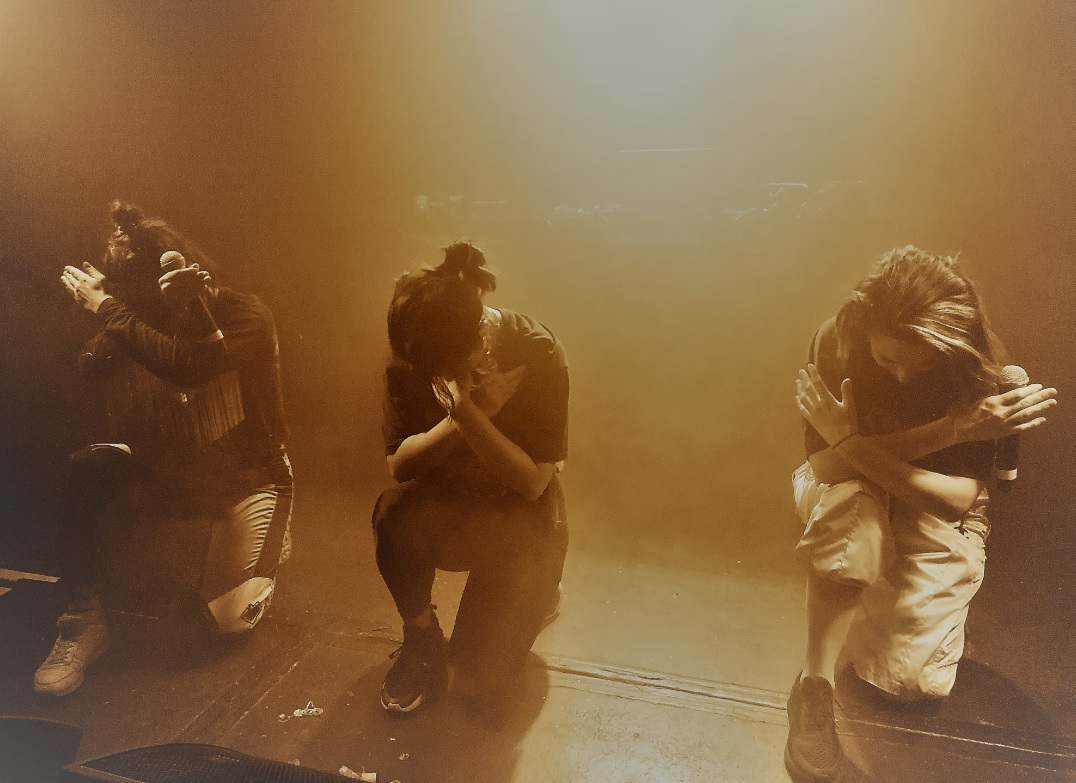 In fact, the unapologetically Australian trio are an elusive crew of talented artists who work across several fields, from energetic live performance right through to visual art and photography.

Mie Nakazawa attended the National Art School in Sydney where she received a Printmaking Prize and went on to receive an Australian Galleries exhibition award after her graduation. Her murals and group exhibitions have been displayed across many galleries over the past eight years. Learn more HERE. 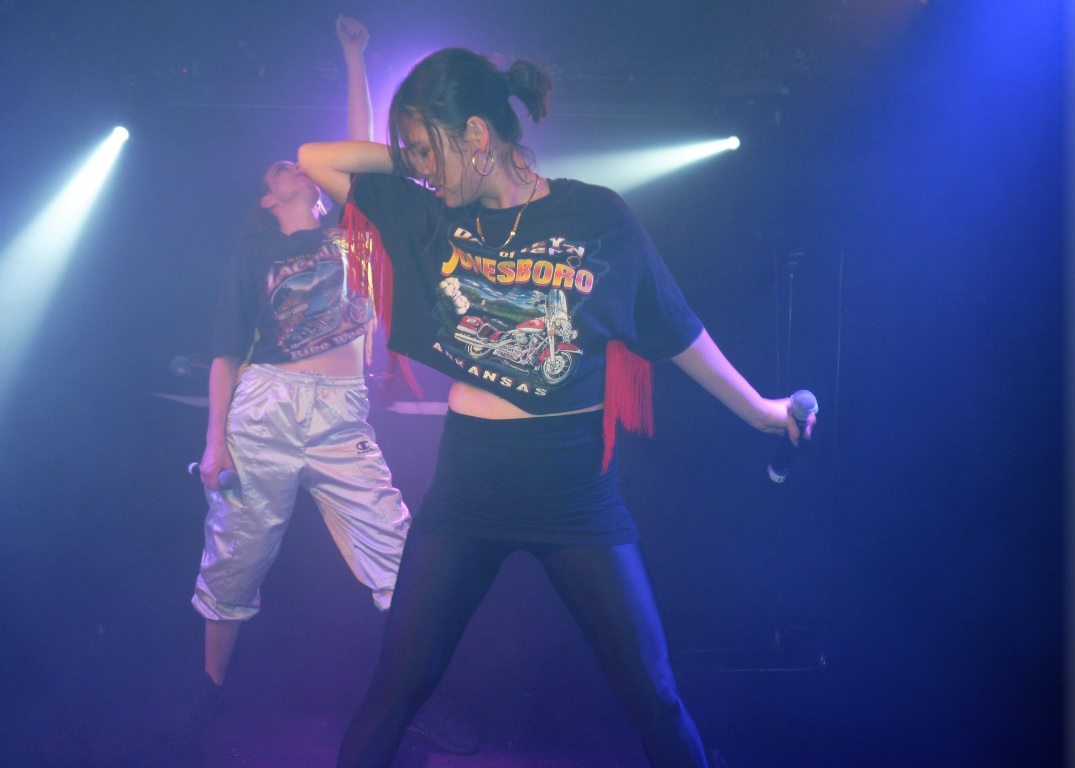 Sister, Claire Nakazawa, who incidentally was celebrating her birthday today, is also into art, photography and painting. Strangely enough, I think I’m correct in saying that Mie also celebrated her birthday in Brighton during The Great Escape. Maybe they will return when Beatrice Lewis celebrates her birthday? 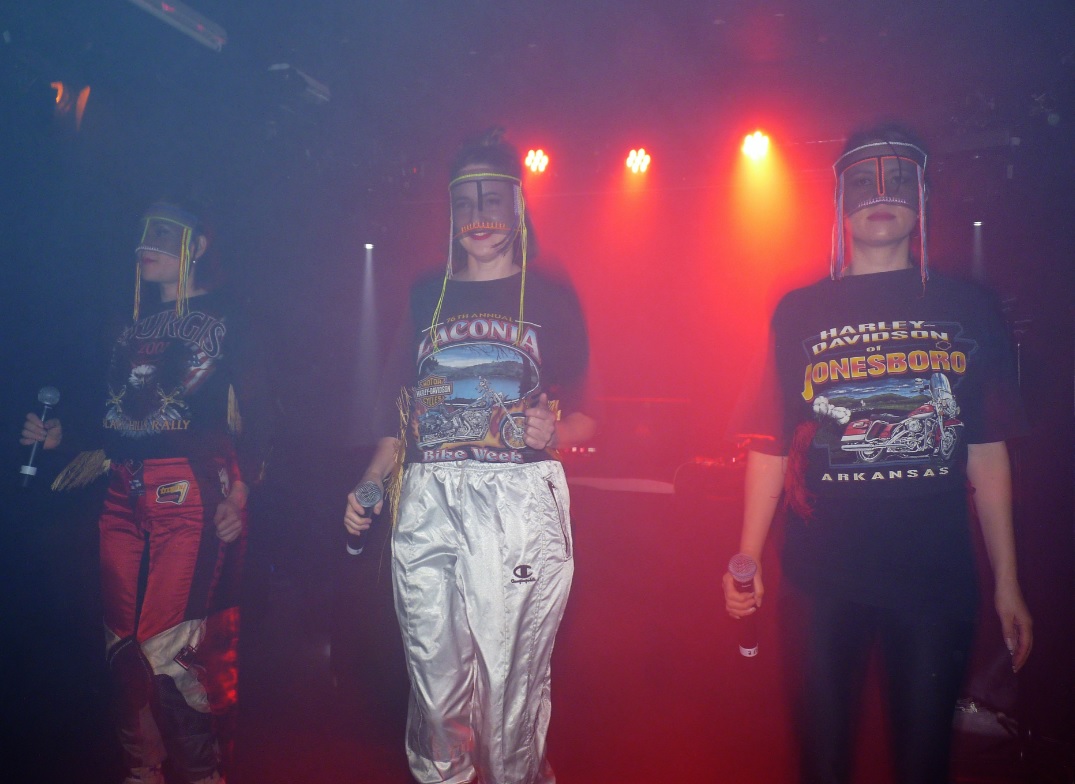 So here we are back at the Komedia, although this time around we are all squeezed into the Studio Bar in order to witness an energetic expertly choreographed set of genre bending songs which grasp their influences from hip hop, pop, electronic, dance, drum and bass and disco. Their sound is ideal for followers of good old decent electronic pop songs from the likes of Girli, Grimes and CHVRCHES. 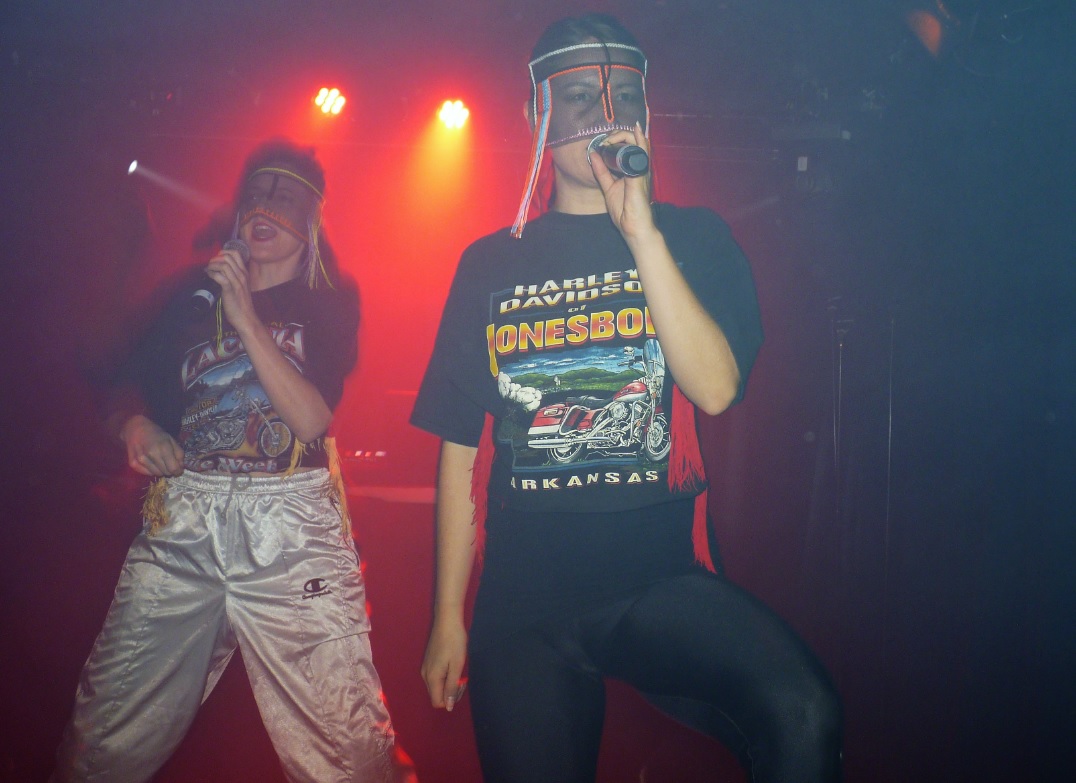 Prior to the show, we had only briefly witnessed Beatrice whizzing about, there was no sign of Claire and Mie, and when the set started at 9pm with only Beatrice on stage, I personally was a tad worried as it was going to just be a DJ style solo set. One song in and it was still only Beatrice. No need to worry as at the start of track two, enter stage left Mie and Claire. Phew! It is going to be a full gig after all with trademark sun visor glasses and head adornments. 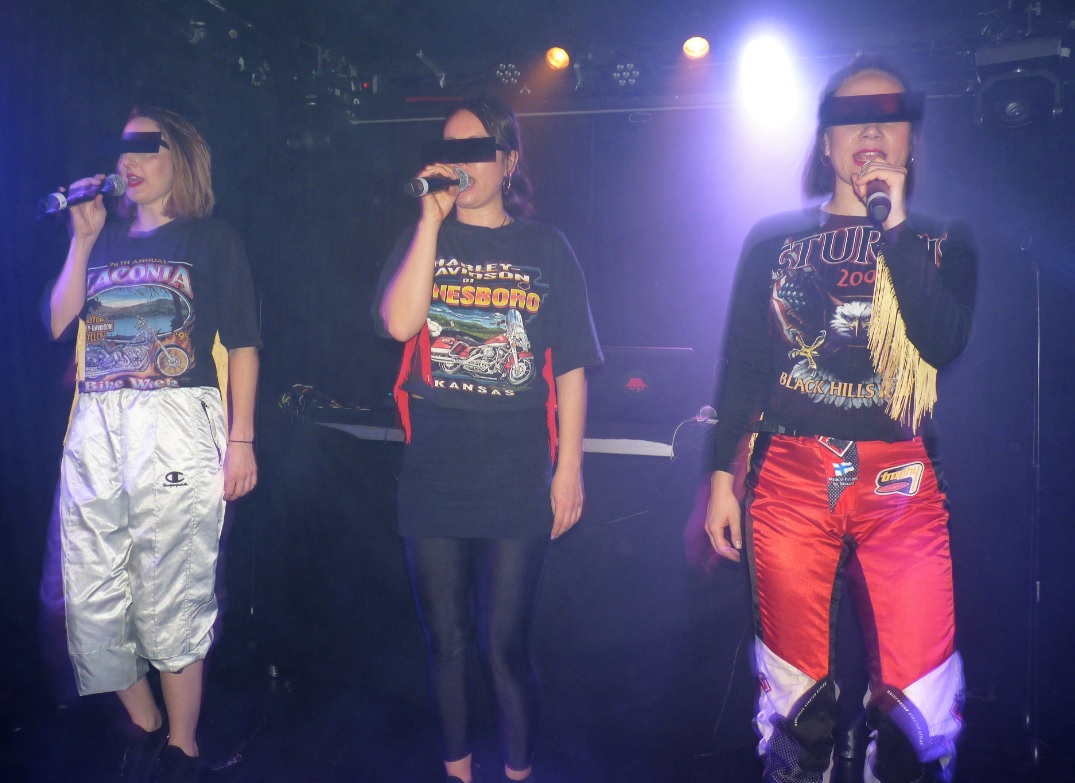 These ladies exploded onto the scene last year with their irresistibly danceable anthem ‘Not About You’ and thankfully it got an airing tonight. These girls aren’t just a one-hit wonder, oh no, there’s lots more where ‘Not About You’ came from. There’s a terrific tongue in cheek track of theirs called ‘Fashion, Model, Art’, which casts a sarcastic eye on that plastic world, where the words uttered in the song include “Where do I put my hands?”. They performed their new Arabesque earworm track they have have very recently dropped called ‘Squat’, which will no doubt be followed by several floor filling cuts, before they finally release an album, which will by then be more like a greatest hits compilation – can’t wait! So no chance of failure with these girls. 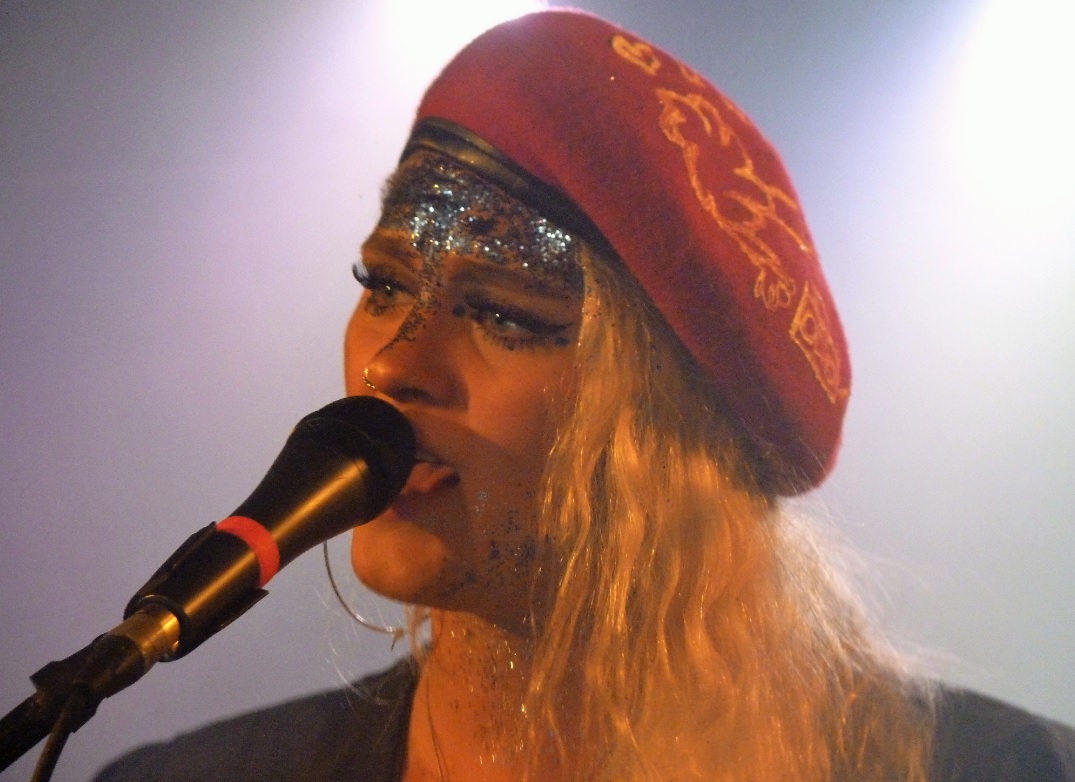 A big up must also go to tonight’s support act Tilda Allie, who adorned glitter across the top of her face and hails from Sweden but is Brighton based. As she informed the crowd, she normally appears live with a full backing band (of five people I do believe) and so this solo performance was a tad different to what she is used to.

In essence all of her soulful songs were on the theme of not letting people tell you what to do and her (bitter) experiences with boys. In fact one of her tunes is called ‘Boi’. I certainly felt that tonight’s emotive performance was her rite of passage in exorcising all of those ghosts of the past from her life. I was right at the front and could see that she was virtually in tears when blasting out the words about ill-fated relationships and the feelings of being used and getting depressed. 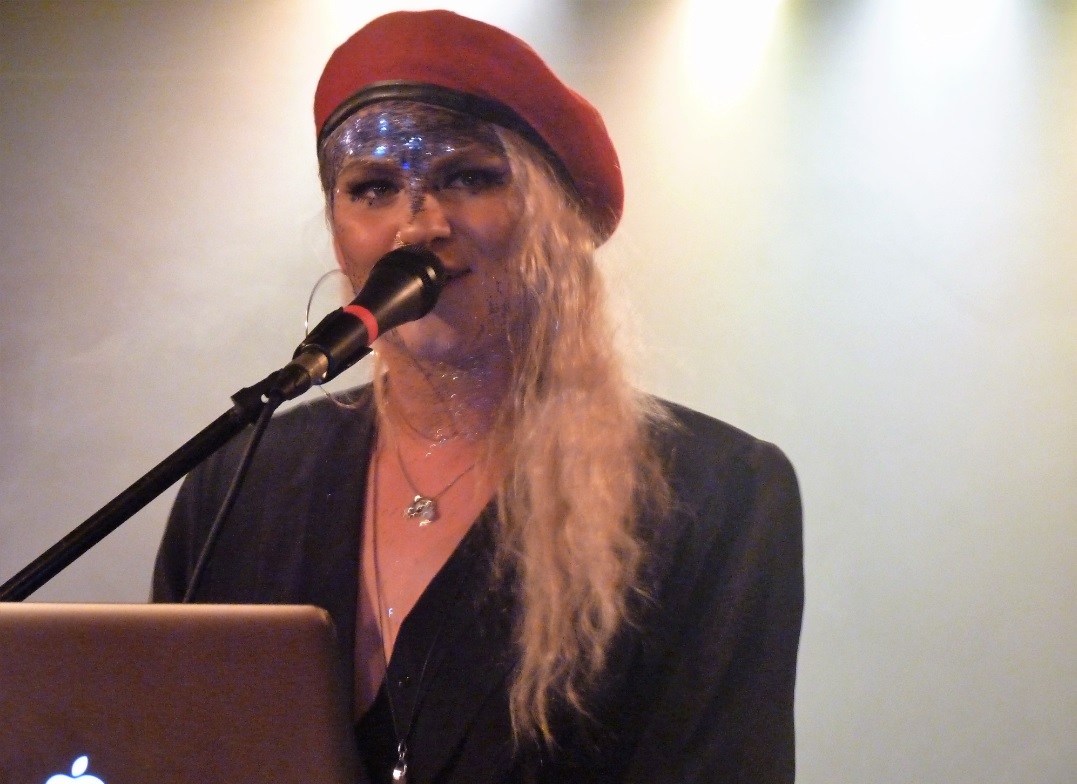 Tunes such as ‘Time Frame’ (which captured the story during the time of a break-up) and the juicy beat of ‘Ready For I am’ certainly got the powerful voice treatment that even Simon Cowell et al would sit up in their chairs and listen to every word. But her final number ‘Obvious’ (about her giving a chap many many hints about starting a relationship), was truly spectacular. It would have won X-Factor!

So young Tilda, there is absolutely nothing to be depressed about with a voice like yours, when people could clearly hear the standards of Amy Winehouse and Björk Guðmundsdóttir were being matched by yourself – Go get ‘em girl! 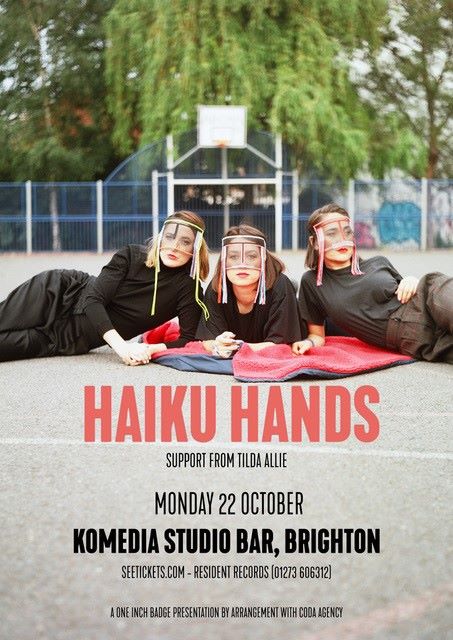 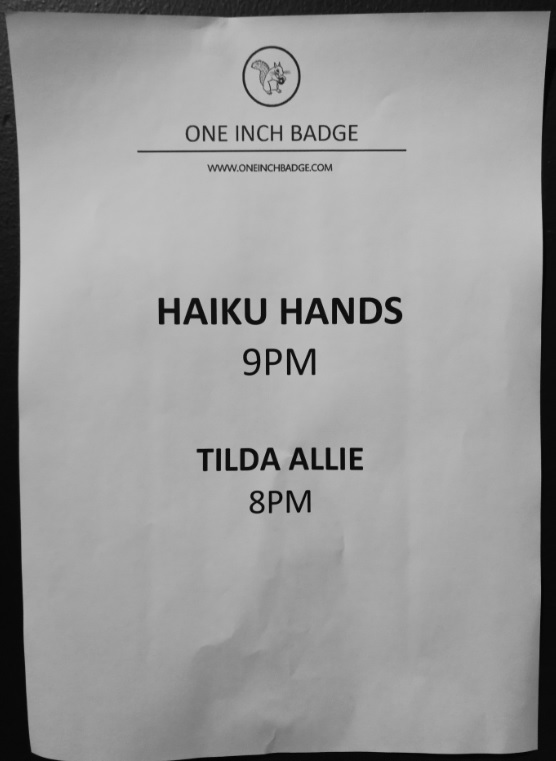