Albion staged a superb second-half fightback but still came up just short as Chelsea took all three points at the Amex.

However, the Seagulls scored their first goal against Chelsea since September 1983.

Chelsea were at Albion’s throats from the start but on his occasion couldn’t capitalise on early possession immediately.

For a short while Albion penned Chelsea back but couldn’t penetrate their defence or create a clear-cut opportunity.

Solly March saw an effort deflected wide by David Luiz but soon after it was great work by Eden Hazard, who was beginning to terrorise the Albion defence, who found a superbly weighed pass for Pedro. He slammed the ball home to put Chelsea in front.

Glenn Murray, Pascal Gross and March were giving possession away far too cheaply, Murray trying the same flick at least twice without much success.

A bizarre moment occurred when referee Stuart Attwell, famous for the 2008 ghost goal, allowed Chelsea to take a free kick for an Albion offside – inside Albion’s half.

March found space and hit a fierce drive which Kepa got down well to push away and within a few minutes a misplaced pass from Leon Balogun allowed Hazard to race away from Dunk and Balogun and poke the ball expertly past Matt Ryan to double Chelsea’s lead. 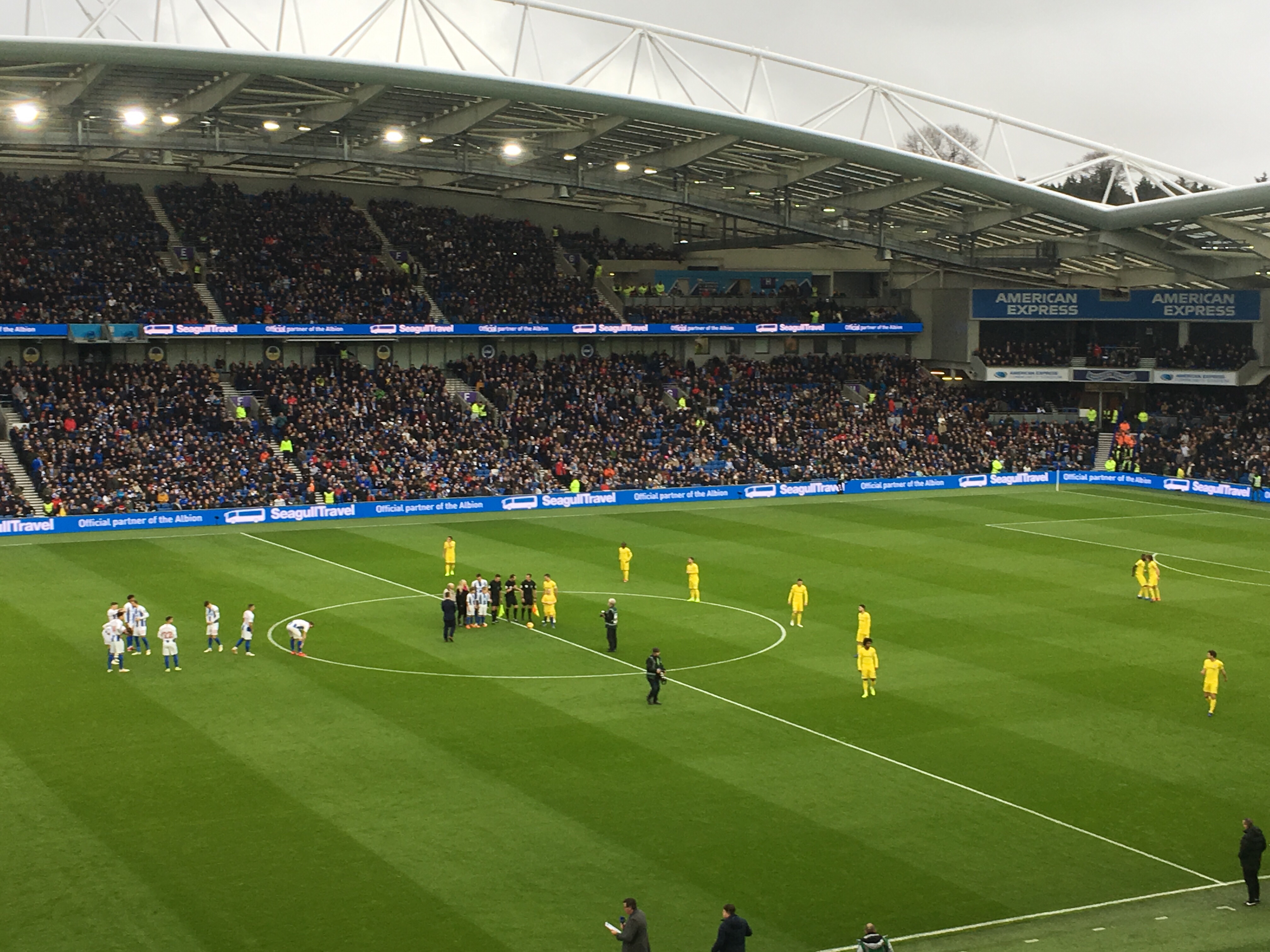 Before half time Antonio Rudiger has a great chance to make it three ,but steered his header wide.

Although there were no changes in personnel after half time, Albion had to put up a better showing.

Gross and Davy Propper began to link up well and Bernardo was getting forward a lot more and with more purpose.

The Seagulls still had no clear-cut chances and almost fell further behind when Marcos Alonso rifled a shot against the inside of Ryan’s left-hand post.

But Albion’s new-found impetus finally showed dividends as Gross and Propper were both involved as the ball fell kindly for March who found a space under Kepa to score Albion’s first competitive goal against Chelsea since Alan Young equalised at the Goldstone on Saturday 3 September 1983 in another 2-1 defeat.

Albion really had their tails up now. Florin Andone replaced Murray and his persistence and tenacity in chasing down lost causes really seemed to hassle the Chelsea defence.

Yves Bissouma replaced Gross and it was again Albion pushing Chelsea back. Proper and Bissouma were getting the ball wide to March but Albion couldn’t get a clear sight at goal.

Proper then slid a ball through to March, who was crudely hauled down by Alonso who, somehow despite being the last man, escaped with only a yellow card.

March fired the resulting free kick over the bar.

Right at the end Dunk saw a header skim the post as Albion pressured the Chelsea defence in search of an equaliser.

In the end it was Chelsea wasting as much time as possible to keep Albion at bay.

The Seagulls stay 13th and travel to the Vitality Stadium next Saturday (22 December) to face out in-form Bournemouth.