Swooning about Brighton’s ‘Bubble’ is no joke 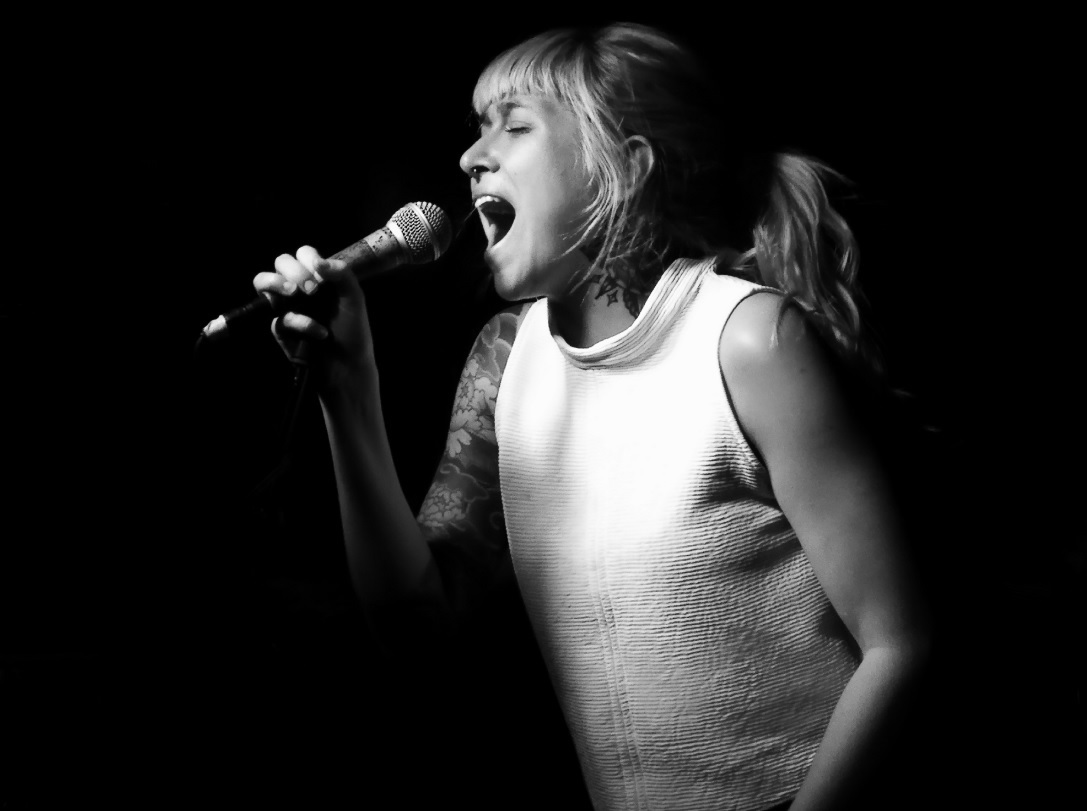 Tonight’s concert was billed as “It’s no joke, don’t be a fool to miss this!” on the account of it being April Fools Day. I for one and my two colleagues that attended this evening’s proceedings were certainly not fools! In fact we were very fortunate indeed as local Brighton based outfit Swoon played an absolute blinder. 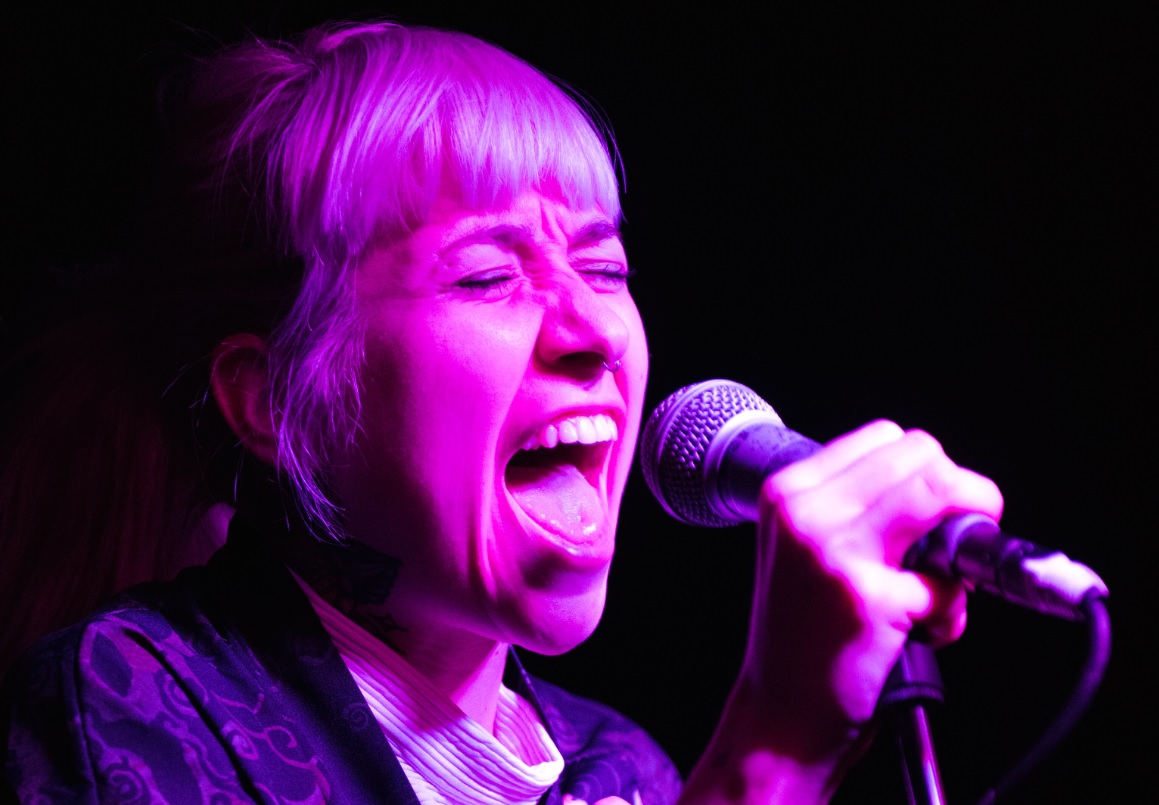 We were in attendance at the Prince Albert, which is located at the top of Trafalgar Street near Brighton’s main railway station. I have to say that this is one of my favourite venues in town because of their excellent selection of liquid refreshments, plus the fact that the bar staff and in-house concert promoter are jolly nice people. The room upstairs where the concerts are held is nice an intimate too, although I have one big gripe. Which is that I am getting a tad fed up of just the standard red lighting for the bands which occasionally turns to pink. The static red gives a terrible burn out for the photos and does not give the artists and the venue the deserved credit when published. 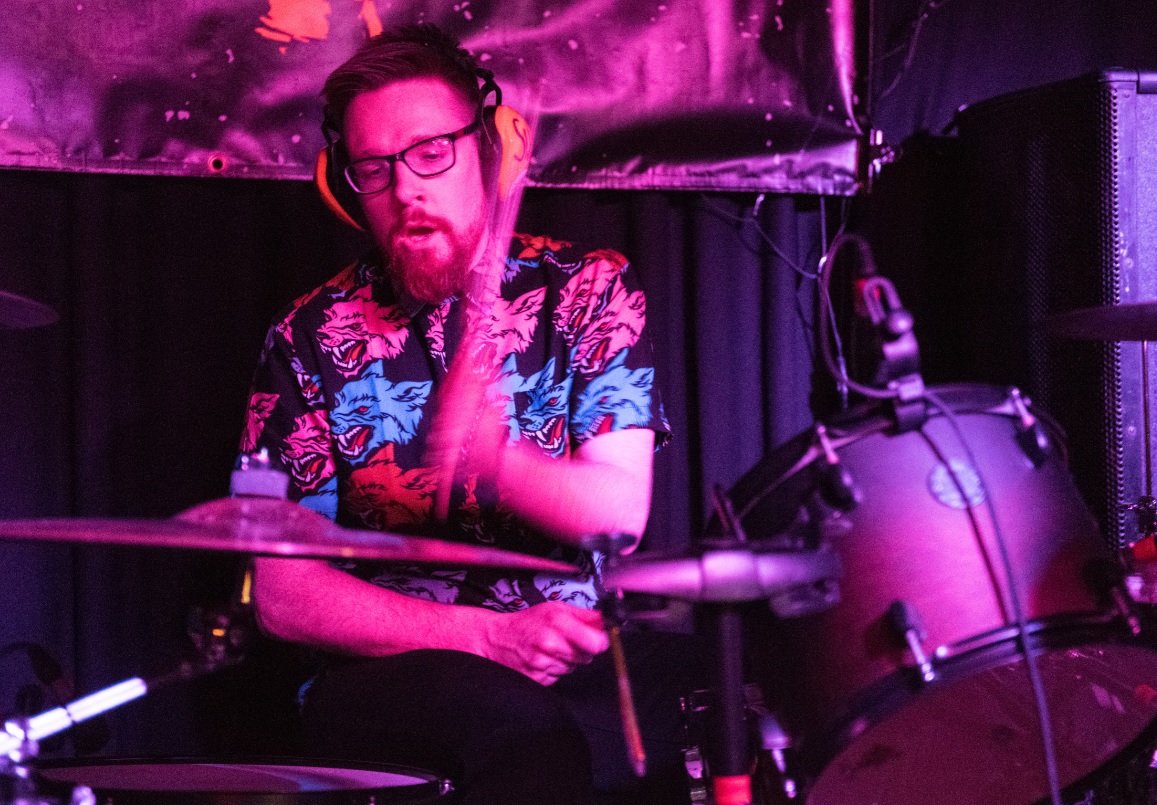 Swoon have been together for coming up to two years and their personnel are Alice (vocals), Adam (keys/guitar), Chris (bass/guitar) and James (drums) and they state that they are a socio-political electro-punk band.

Their first release ‘Teeth’ caught the attention of the Brighton-based label and booking agency, One Inch Badge. They began playing shows supporting artists such as The World is a Beautiful Place, Her’s (RIP), The Blinders and most recently they played as main support on Pussy Riot UK tour. 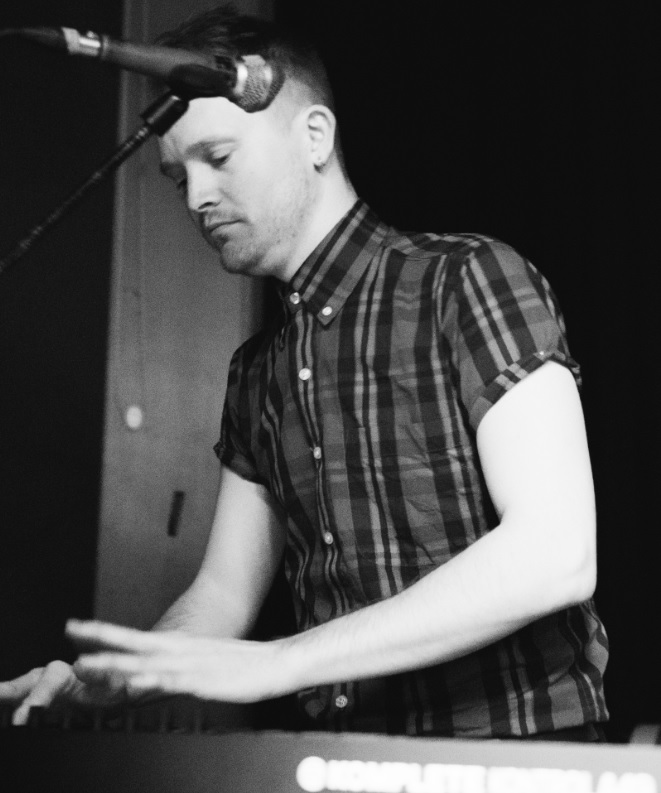 The band’s influences come from disparate places: a huge passion for the contemporary pop icon Grimes, an intense worship of David Bowie, mass book-consumption and the nostalgic-listening of emo and metal. All of which are tossed into the Swoon melting pot and from this, there emerges their ‘anything goes’ alt-pop music. The Swoon sound is a pleasant blend of the above musical styles but also incorporate goth, EBM, synth rock and even tinges of dance. If you enjoy bands like Evanescence then Swoon are for you! 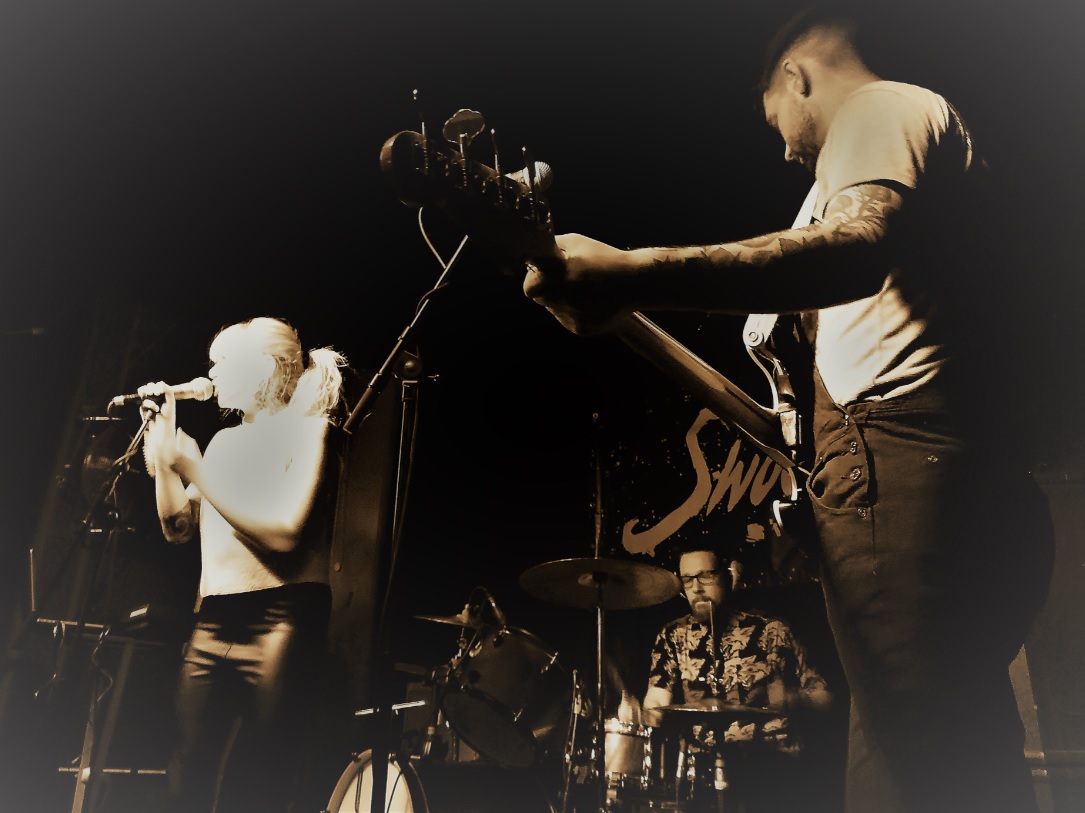 When we last saw Swoon perform in Brighton it was at the Hope & Ruin on 11th December last year and to coincide with that gig, they uploaded ‘Heartstrings’ onto Bandcamp. Have a listen to it HERE and read our review of that concert HERE.

Tonight was our third helping of Swoon (the first being as support to The Blinders at The Haunt last November – read our review HERE) and once again tonight singer Alice who hails from Milan, was surely belting out those notes. She is so expressive when she sings as she enters another world – it must be that Latin blood. 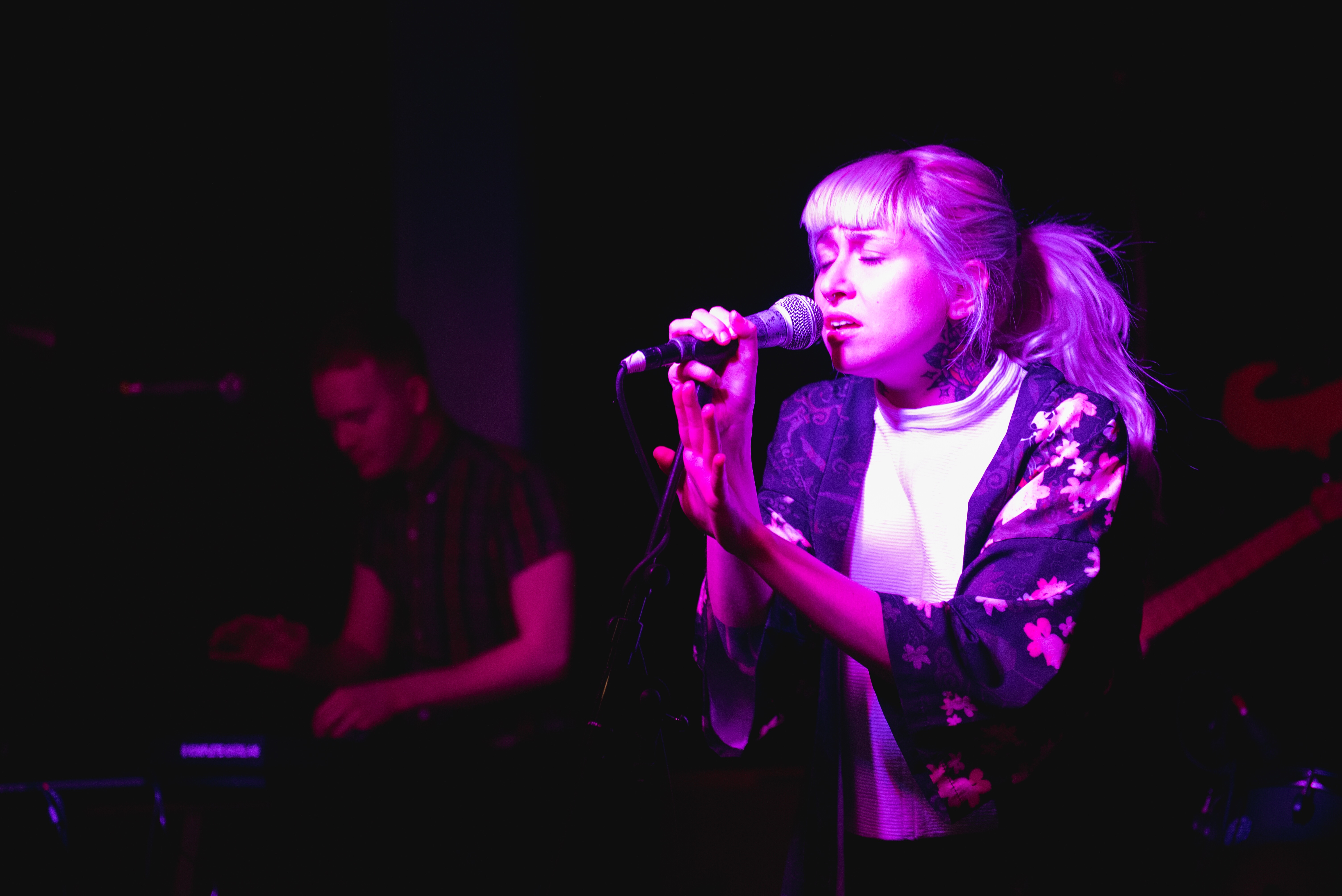 We were treated to a fab ten tune set that included the aforementioned ‘Heartstrings’ and ‘Teeth’. But also included their first single of 2019, that being ‘Down A Rabbit Hole’, but may I take the opportunity to steer you towards their four track EP from last year, as it not only includes ‘Teeth’ but is headed up by the terrific ‘Fun Police’. To me ‘Fun Police’ sums up the powerful Swoon sound – see what I mean HERE and purchase the physical 10” transparent yellow vinyl record HERE. 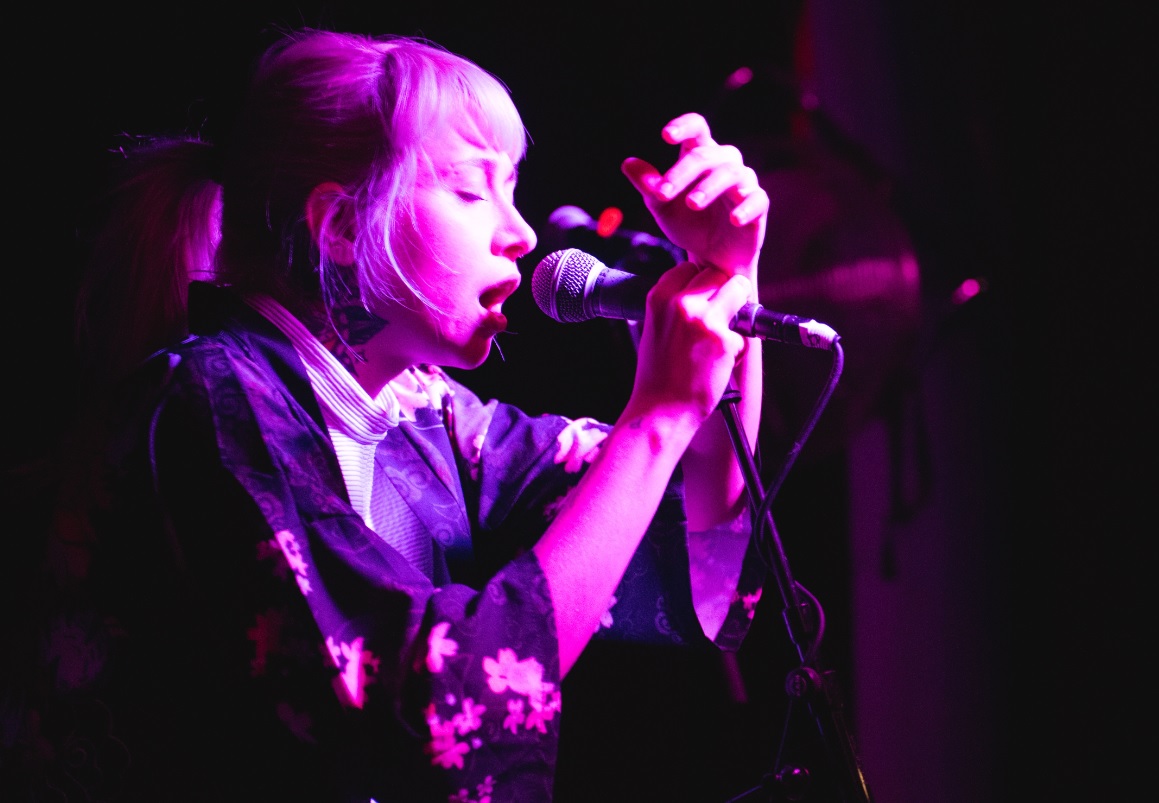 However my friends it gives me pleasure to inform you of an awesome new bouncy anthem, it’s called ‘Bubble’. The idea behind the song was Brighton itself. It refers to our all inclusive acceptance of everyone whether they be straight, gay or whatever race or creed – all are welcome here! So Alice being an outsider herself, who has been adopted by our wonderful city, has written the song as it’s as though Brighton is in it’s own ‘Bubble’ leading the way and the rest of the world will follow! I tell you it’s that good, that the punters wouldn’t let the band off stage tonight, until they performed the tune all over again! I wonder if is their first ever encore? ‘Bubble’ should see the light of day soon – watch this space! “The B-U-B-B-L-E” – “That’s why I love our bubble!”. It WILL be one of my top songs of the year, no doubt! 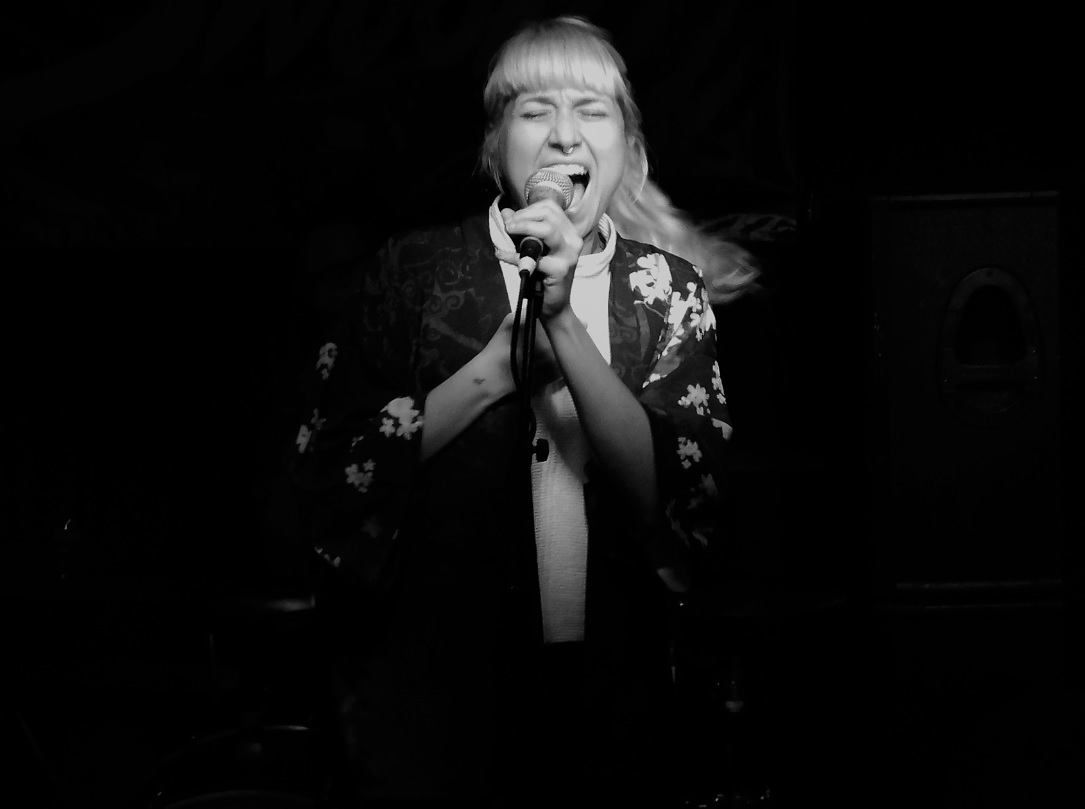 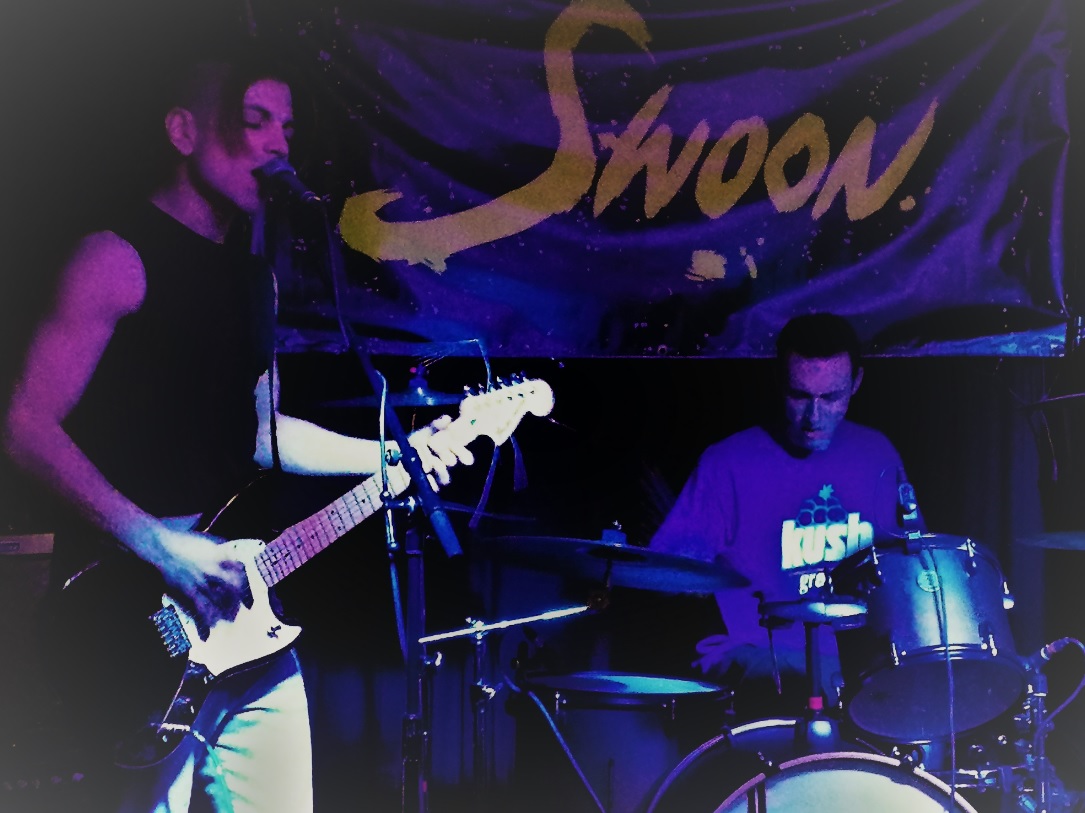 There were two support acts this evening, the first of which were The Hidden who are now based in Brighton but originally hail from Italy. The personnel are Stevoo Hide (guitar/vocals), Lancif (bass) and Luca Lombardi (drums). 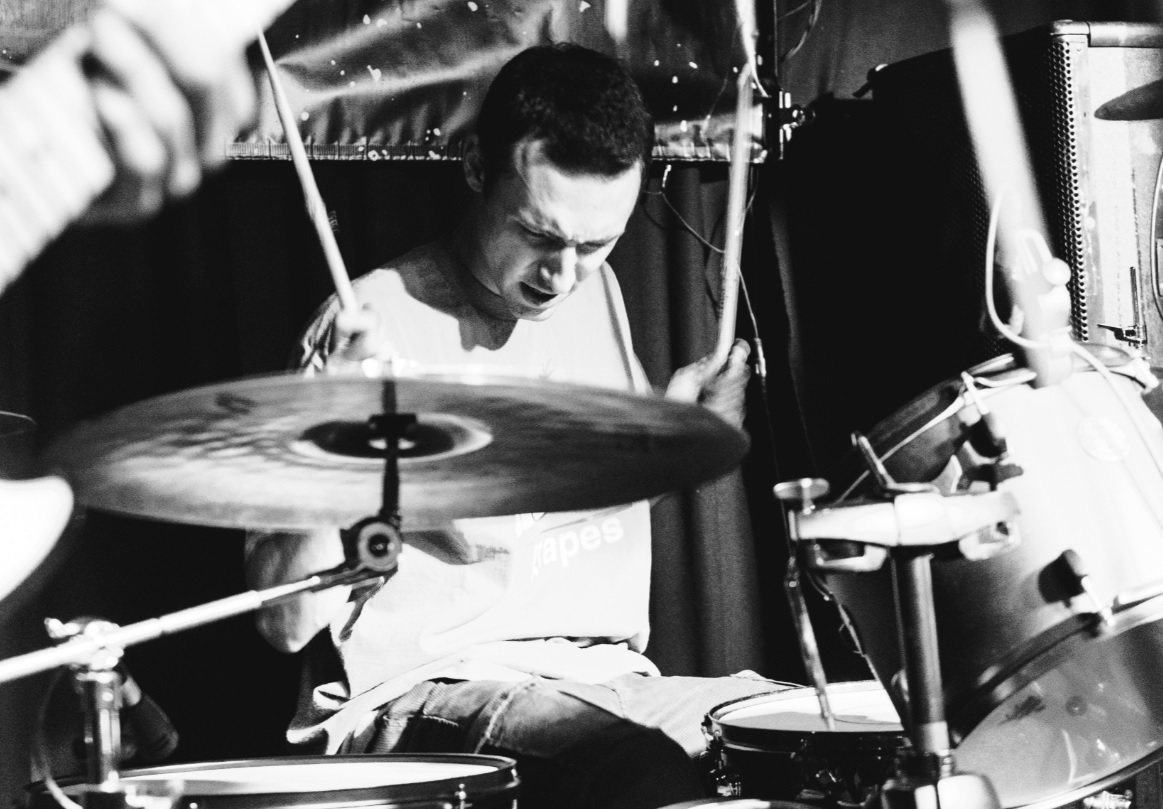 It’s fair to say that Stevoo certainly has the charm and looks of a frontman as I’m sure quite a few ladies (and guys) have already noted. His vocal delivery sounds akin to that of The Strokes and the band specialise in slightly off-beat rock and are tuning their sound at present. I understand there is a new EP either just out or on the horizon from these lads, so could be worth checking out. 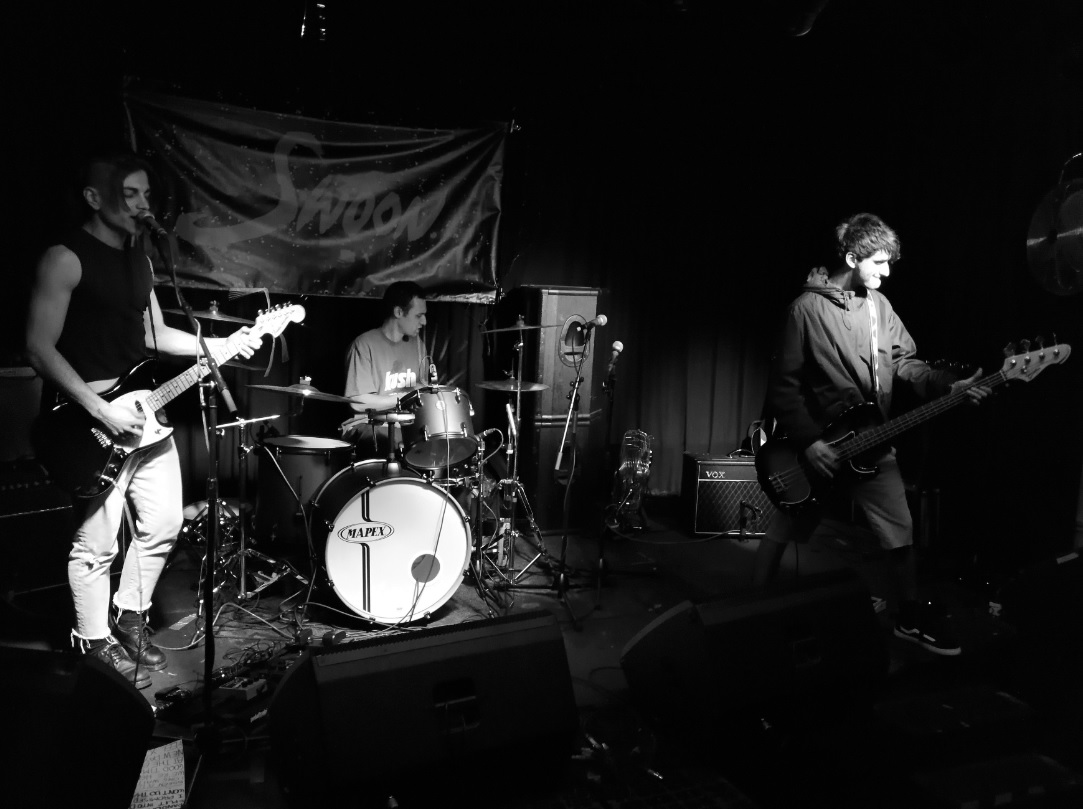 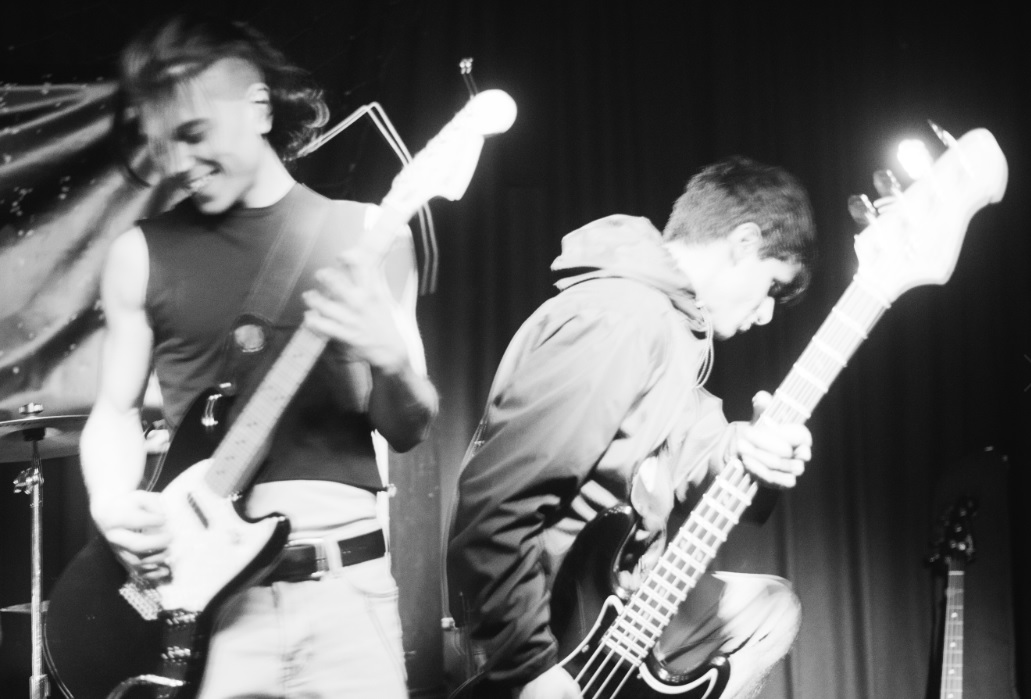 More on The Hidden HERE. 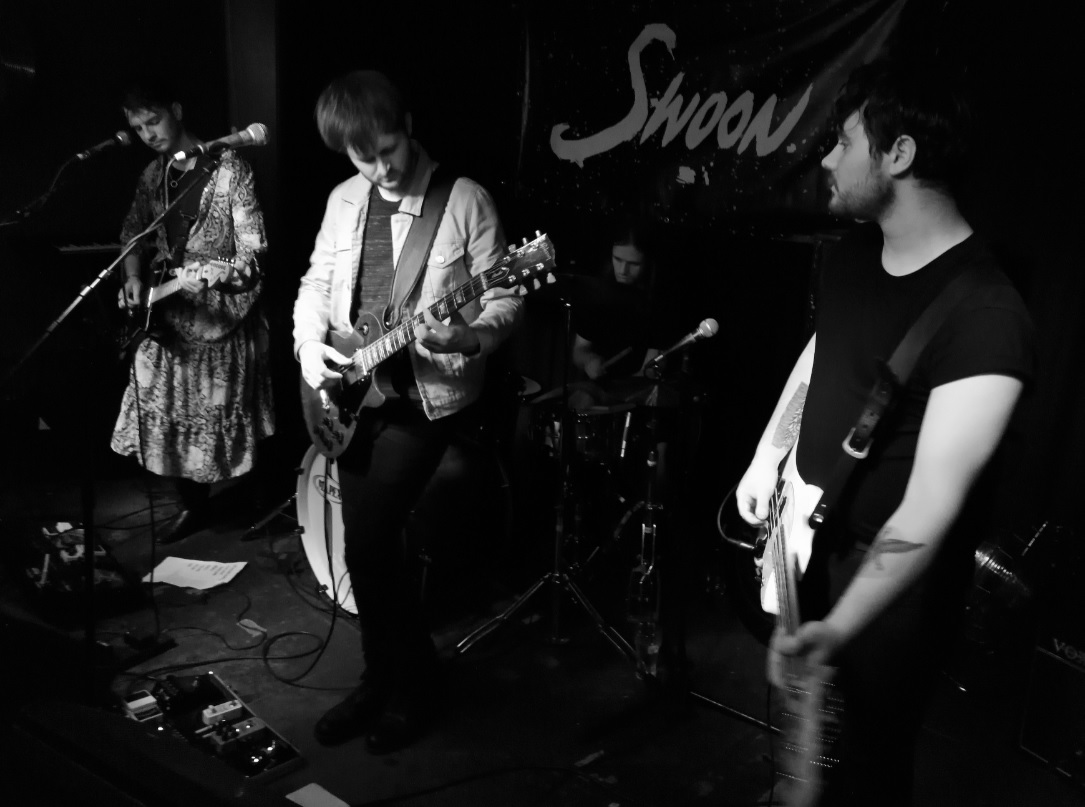 Next up were The Grand Nowhere who are Jamie (vocals/guitar), Benj (vocals/guitar), Sean (bass/synth) and James (drums). These lads are also Brighton based. It seems as though every street has a band in it in Brighton – happy days!

The Grand Nowhere had spent the previous day in the studio laying down their next single, which will be out in the summer and is entitled ‘The Cynic’. Musically they were not as heavy as the previous act and thus falling in line with something similar to The Killers or Radiohead or even elements of Tom Petty & The Heartbreakers. 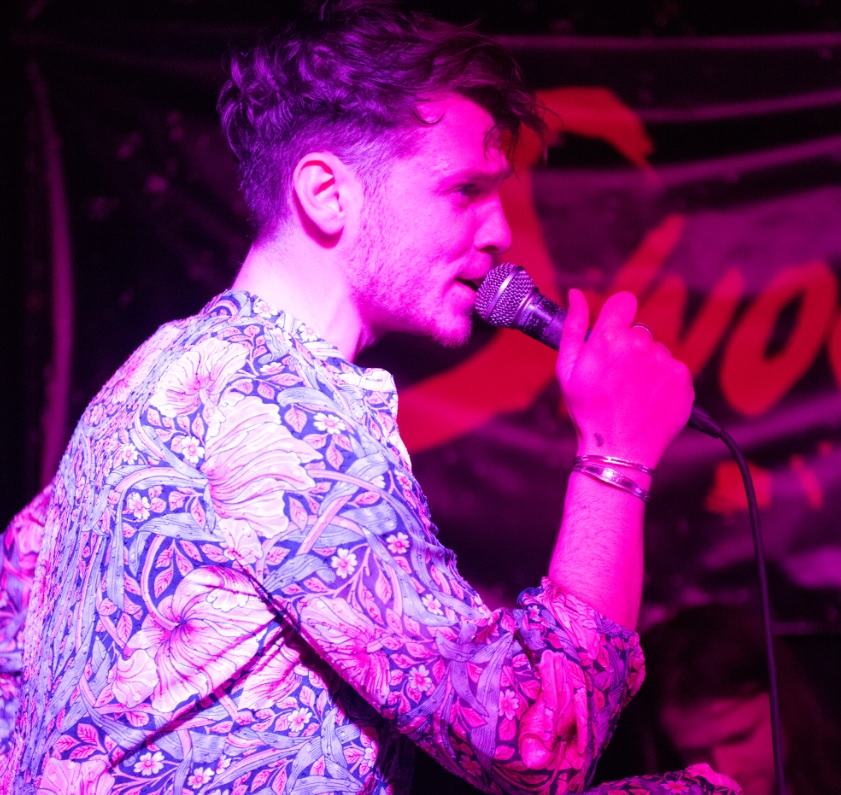 The dual vocals worked quite a treat this evening, even if one of the guys was wearing a granny dress for a laugh as there was a billing saying Gran instead of Grand apparently. As their set progressed, they either got better and better or I was becoming more in tune to their sound.

They opened their set eight tune set with ‘My Thoughts Again’ which can be heard HERE and the lads ended with their current single entitled ‘Alibi’ which you can listen to HERE and purchase it HERE.

Expect to hear more from these boys! 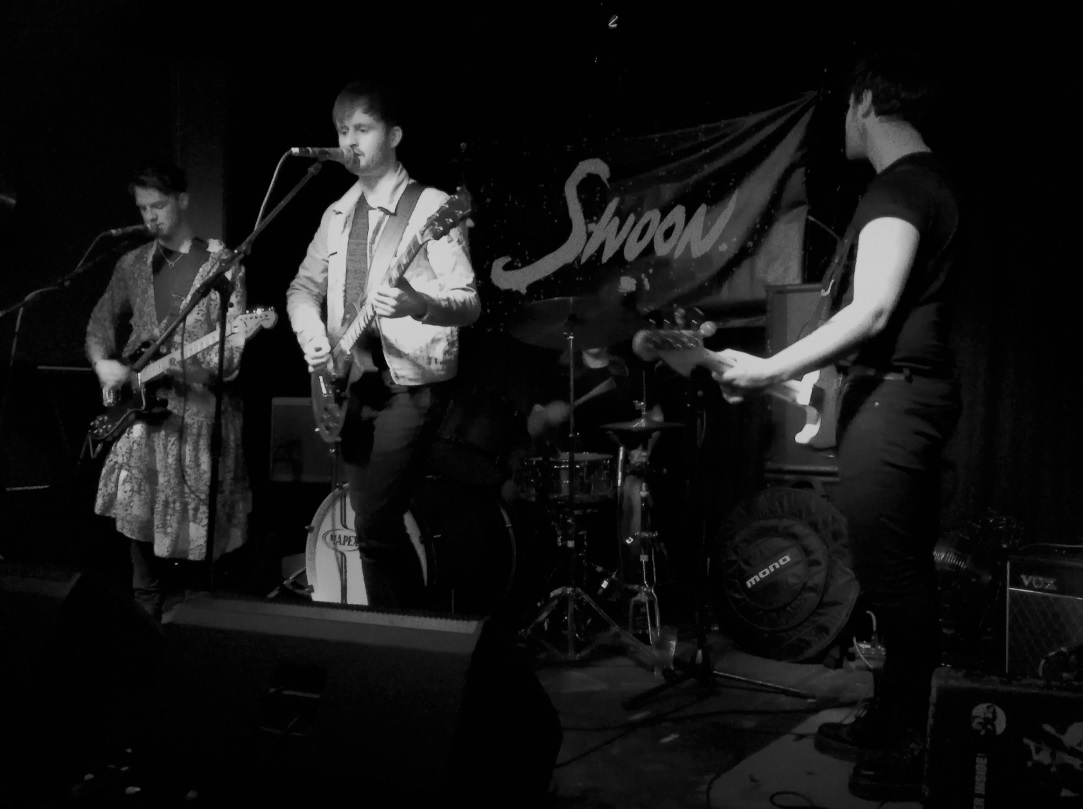 More on The Grand Nowhere HERE. 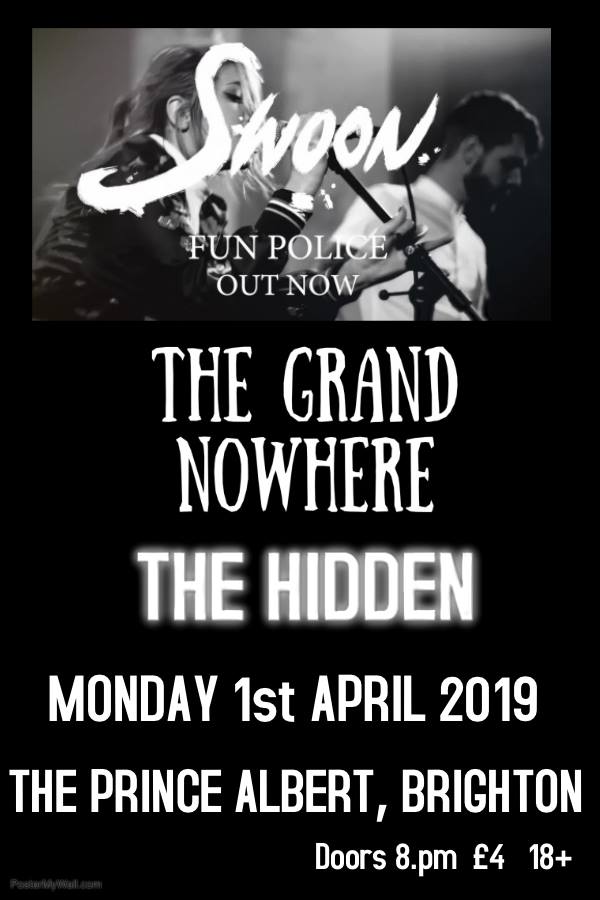 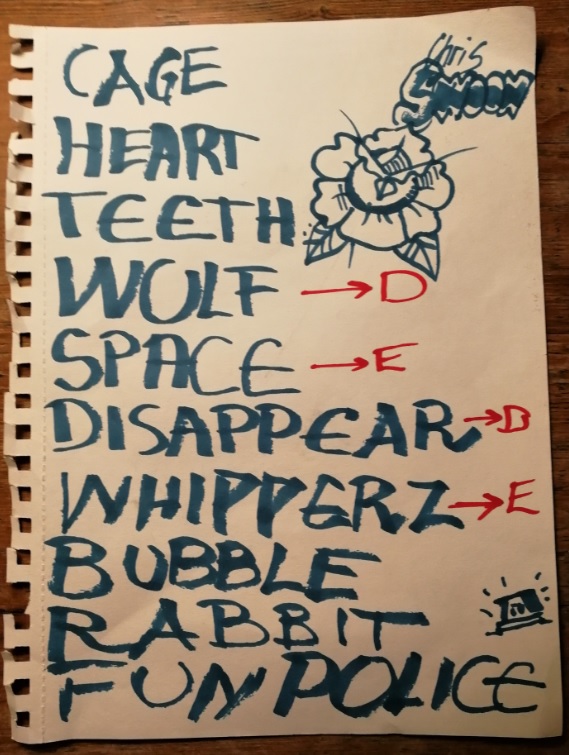