The chief executive of Shoreham Port is to leave later this year after 10 years at the helm.

Rodney Lunn, 59, has led the port through a period of significant growth, with annual revenues rising from £8 million to £14 million.

He also chaired the industry representative body, the British Ports Association (BPA), for two years until last April, having served as vice-chair for the previous two years. He remains on the BPA Council.

Mr Lunn started his maritime career at sea as a deck officer with P&O before spending a stint at weather services company Oceanroutes.

He took over from two other Rods – his predecessor as port chief executive Rod Johnstone and the chairman who was in post when he started, Rod Danes.

Shoreham Port said: “After a decade of service at Shoreham Port, Rodney Lunn, the chief executive has decided that he intends to leave the port at the end of the year.

“This creates a rare opportunity for new leadership at Shoreham Port. Rodney will remain in his current position until December, allowing ample time for a successor to be appointed.

“During his tenure, Shoreham Port has seen a 75 per cent growth in revenue from £8 million to £14 million through a focused diversification of business and a relentless drive for continuous improvement.

“Last year, around 1,500 commercial shipping movements and over two million tonnes of cargo were handled.

“Additionally, the port now has a thriving tenant community with over 100 businesses and 1,500 jobs across its estate.

“The Port Masterplan remains on track, with strategic land purchases and development of key sites. For example, the Lady Bee Enterprise Centre, a new commercial estate on an area of reclaimed land near the lock gates will be completed in May 2019.

“Rodney’s mantra has always been that the port may not be the biggest port in country but will strive to be the best. This has meant hiring the best staff and training everyone to deliver a first-class service to their customers.

“As a trust port, building relationships with the port’s eclectic mix of stakeholders and delivering meaningful community partnerships has also been a priority for Rodney.” 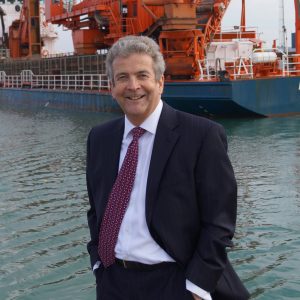 Shoreham Port chair Amber Foster said: “Rodney has taken the port from strength to strength and will be greatly missed.

“He has made a tremendous contribution to Shoreham Port, to its stakeholders and to the port sector as a whole.

“Thanks to his leadership, we are well on the way to delivering the masterplan, the port’s relationship with its stakeholders has been transformed and he leaves us in a position ready to move on to our next stage of development.

“It’s a legacy of which he should be very proud.

“Rodney will leave Shoreham Port in a very strong position for the next chief executive to capitalise on for the future.

“The board and I would like to thank him for this and we wish him well with his future endeavours.”

Mr Lunn said: “It has been a great privilege to be the chief executive of Shoreham Port over the past decade and I have thoroughly enjoyed working with an enthusiastic and committed team.

“We have achieved great success together, however, I believe the time is now right to step aside and hand the baton over to a new leader to ensure new ideas and fresh perspectives are brought to the port.

“We have 120 fantastic staff members and I am confident that the port will continue to thrive and remain a key local and regional economic driver.”

The chief executive vacancy will be advertised on the port’s website – www.shoreham-port.co.uk/jobs.