Brighton date not to be sniffed at! 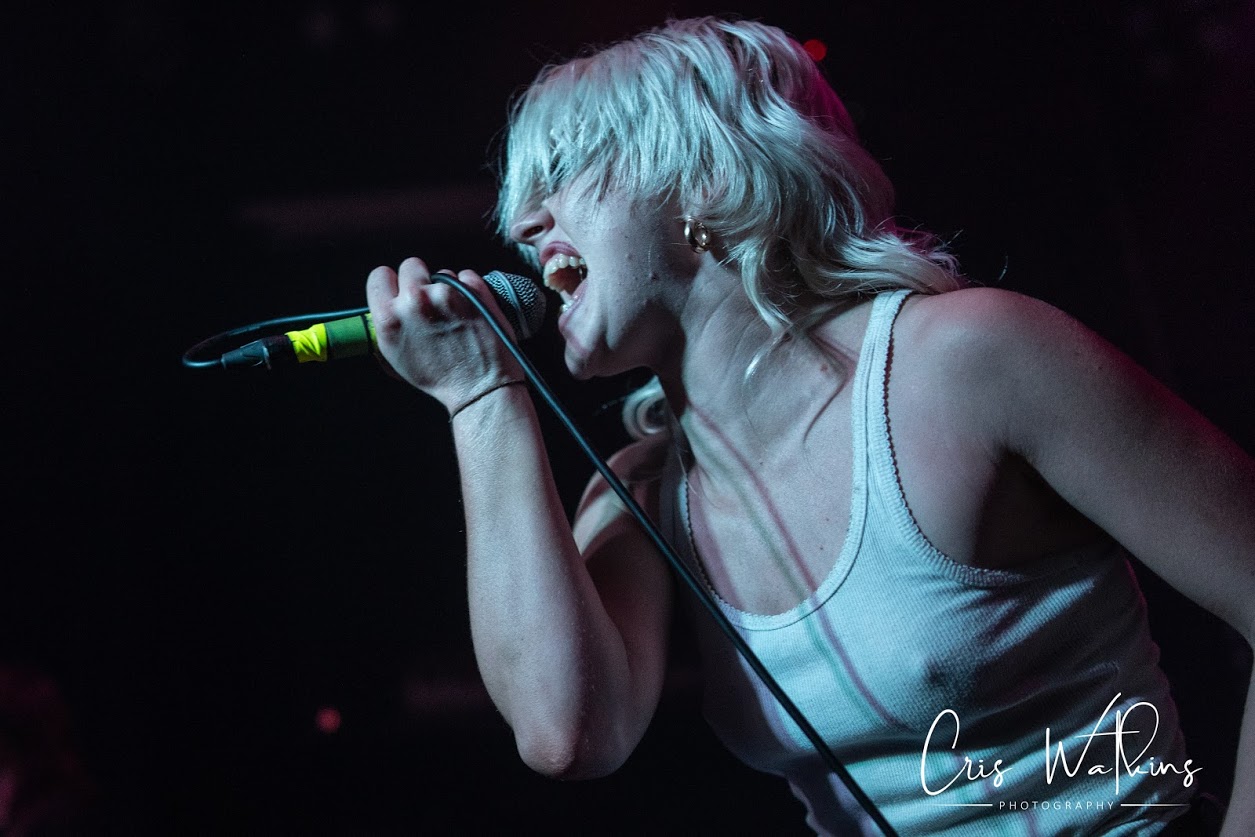 Melbourne based four piece Amyl And The Sniffers deliver short sharp bursts of brash punky pop. Along with The Chats they are spearheading a mullet-wearing, beer-fuelled punk revival which seems to be sweeping the music scenes of the world. Tonight the sweary, sweaty Aussie evangelists roll into Brighton, and The Haunt is packed, and buzzing with anticipation. 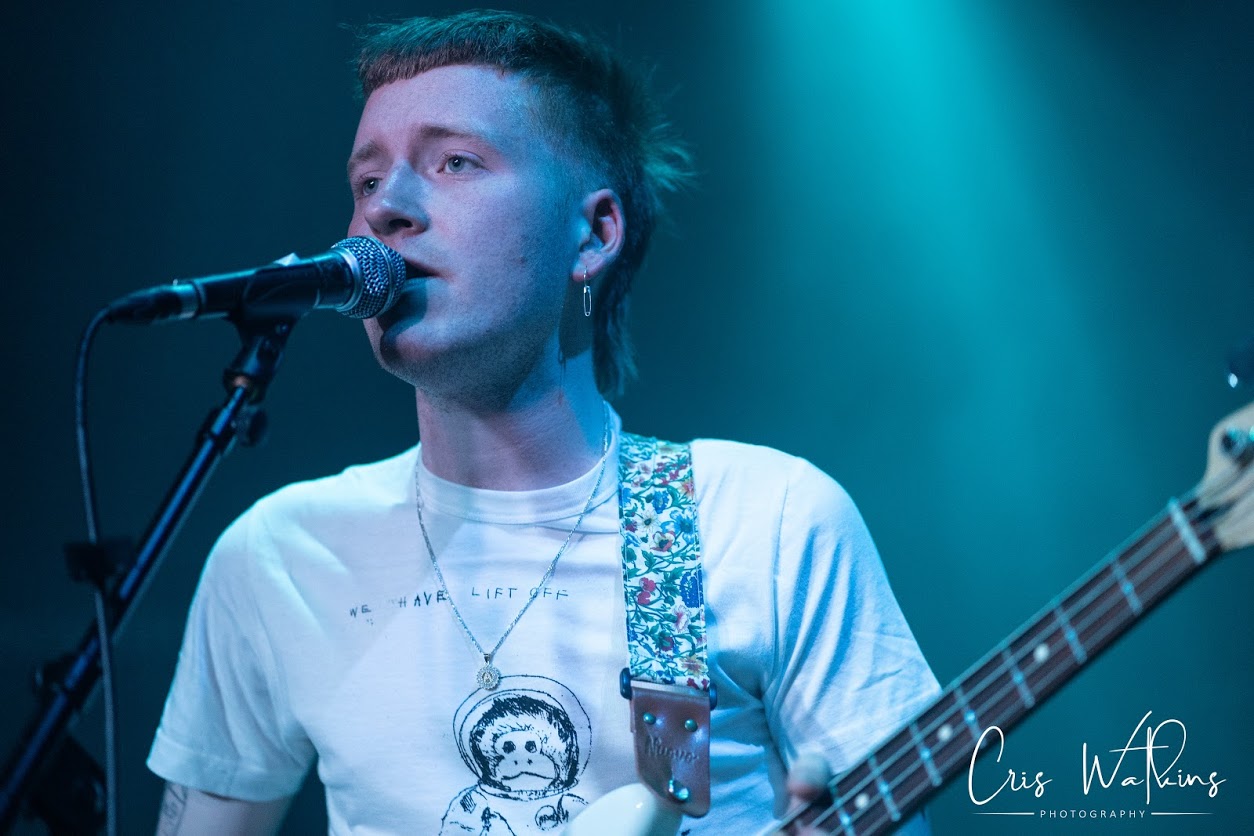 Tonight’s support is from London five piece Truman Dinosaur. There is nothing musically to connect them with the headliners, the only visible link being the lead singer’s anarcho mullet hairstyle. As they take the stage it quickly becomes obvious that they have more in common with 90’s indie in the vein of Cast or Shack, with lashings of vocal harmonies, chorusy guitar, tempo changes and stops. Opening number ‘Heads Or Tails’ is bouncy joyous pop, and frontman Sam Winters bops along on his crepe soled Dr Marten boots, initially jangling a guitar before later swapping to bass. He swaps with corkscrew haired Will Tyler, whose long scale legs contrast with the short scale bass he starts the set with. Lead guitar is supplied by Mathew Connor, who rocks a geeky emo look with pudding basin hair and half-mast trousers, but somehow manages to look effortlessly cool. Sam Windass is on keyboards, with a tidy beard and sharp, tight piano chords bolstering the tunes, while drummer Aaron Singh pounds out a 90’s style baggy beat with a beautifully fluid style and some impressive fills. 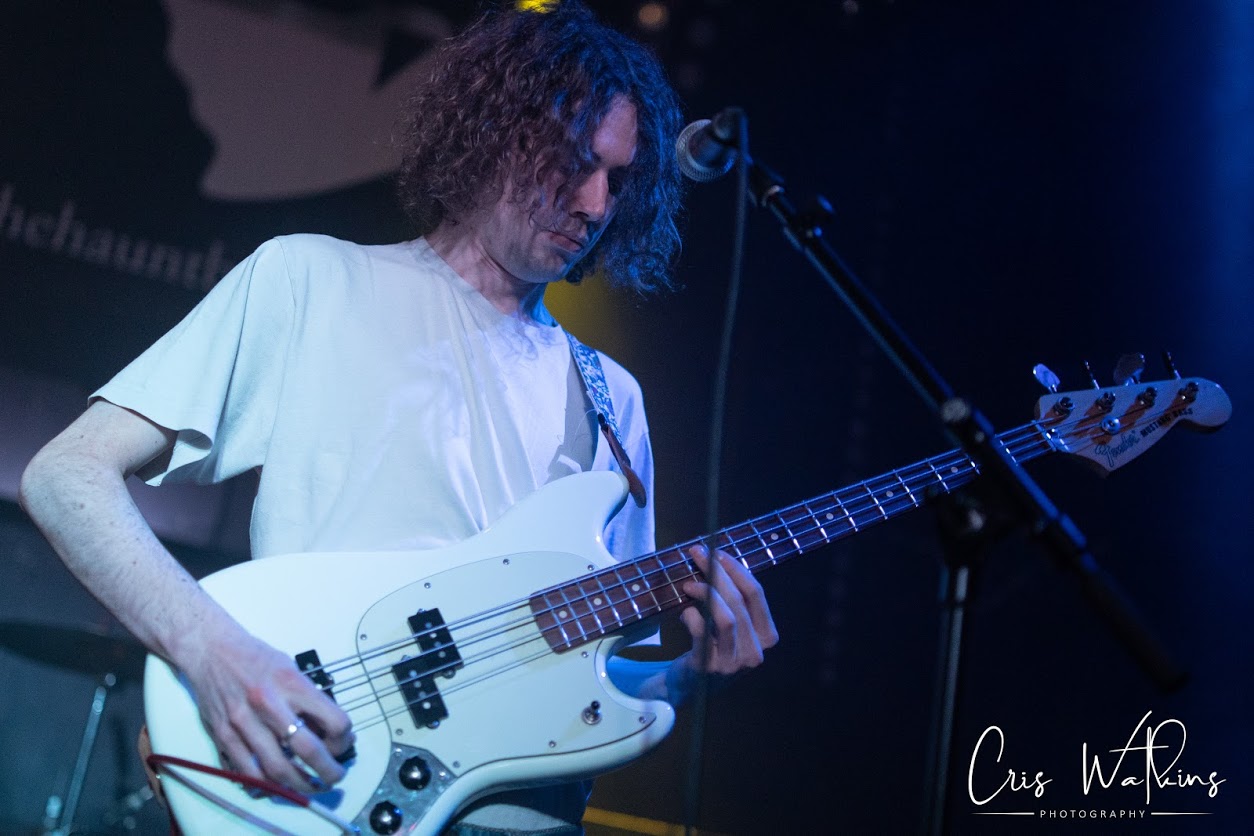 The second number has lovely psych-style vocal harmonies, and these continue into ‘Rain In The Evening’. The gist of the lyrics is that “they say it’s going to rain, so I’ll sleep till noon.” Chance would be a fine thing. ‘To Be Expected’ signals an unexpected swap of guitar and bass, and this configuration continues for the remainder of the set. ‘Does This Feel Like Heaven To You?’ has beautiful soaring harmonies and interestingly angular guitar breaks, while the bass really gets moving with plenty of octaves and hammer-ons. The drum led ‘What If’ features three part harmonies and extended fills around the kit. After a jangly guitar break there’s a big build into the solo, backed with an insanely catchy bass hook. The half hour set concludes with the single, ‘Turn Me Into A Crocodile’, with a chiming twin guitar figure and lots of ‘ooh’ harmonies. It’s been an enjoyable set with a lot going on, and I for one would be interested to hear more. 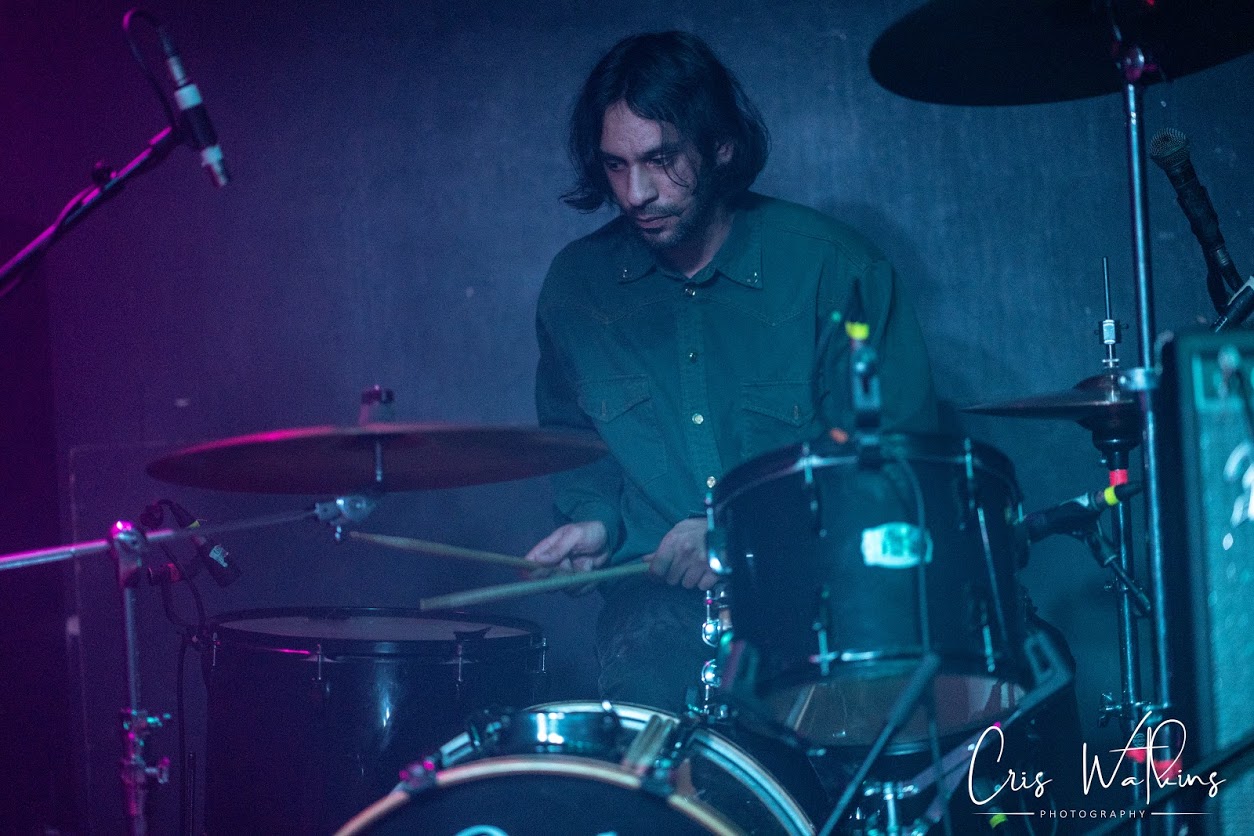 Truman Dinosaur setlist:
‘Heads Or Tails’, ‘Drum Of Drumming’, ‘Rain In The Evening ‘, ‘To Be Expected’, ‘Does This Feel Like Heaven To You’, ‘What If’, ‘Turn Me Into A Crocodile (And Let Me Eat Your Ego)’. 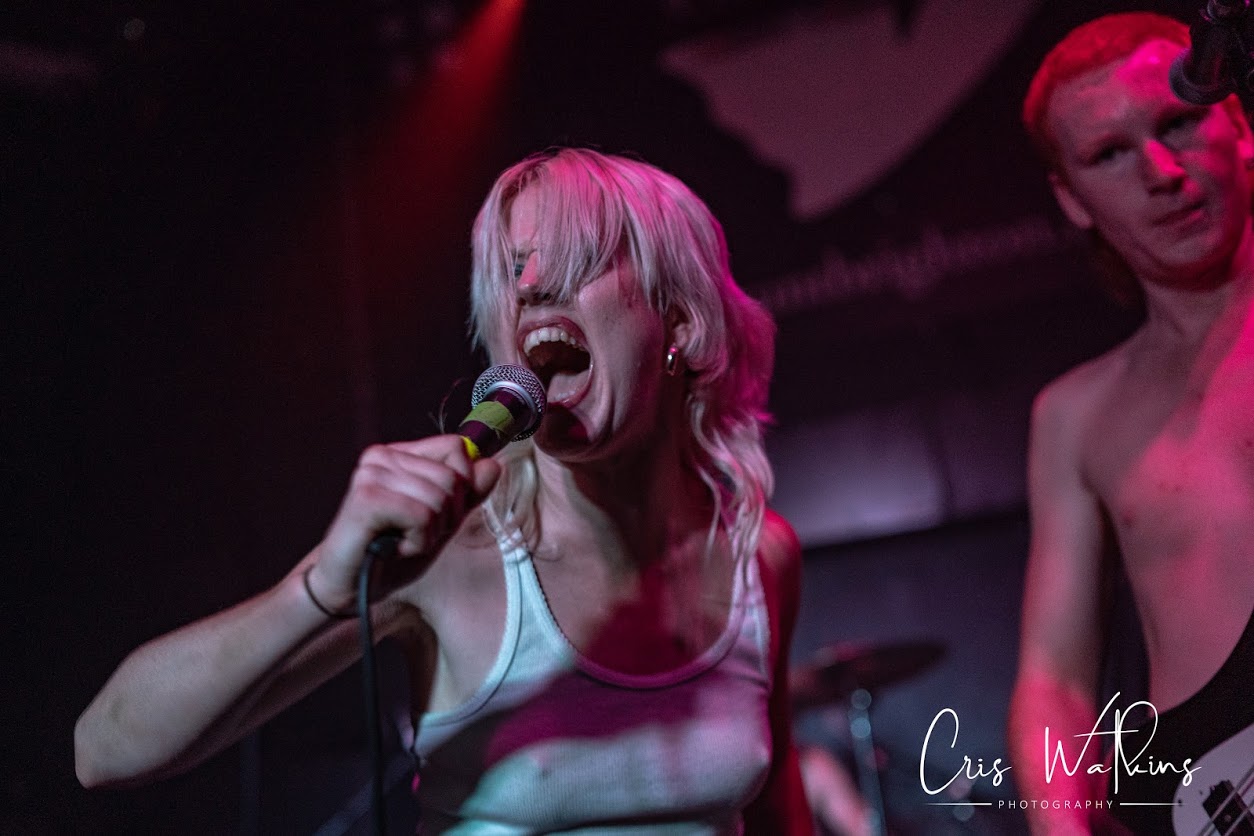 Soon it’s time for the main event, Amyl And The Sniffers and the atmosphere is electric. The band are swapping the gear over themselves, no guitar or drum techs here, and the crowd is getting excited. The blistering opener, ‘Go F*ck Yourself’, elicits an immediate burst of enthusiastic dancing and several drinks are flung into the air. This is a mobile and zealous Brighton crowd, and it’s going to get messy. 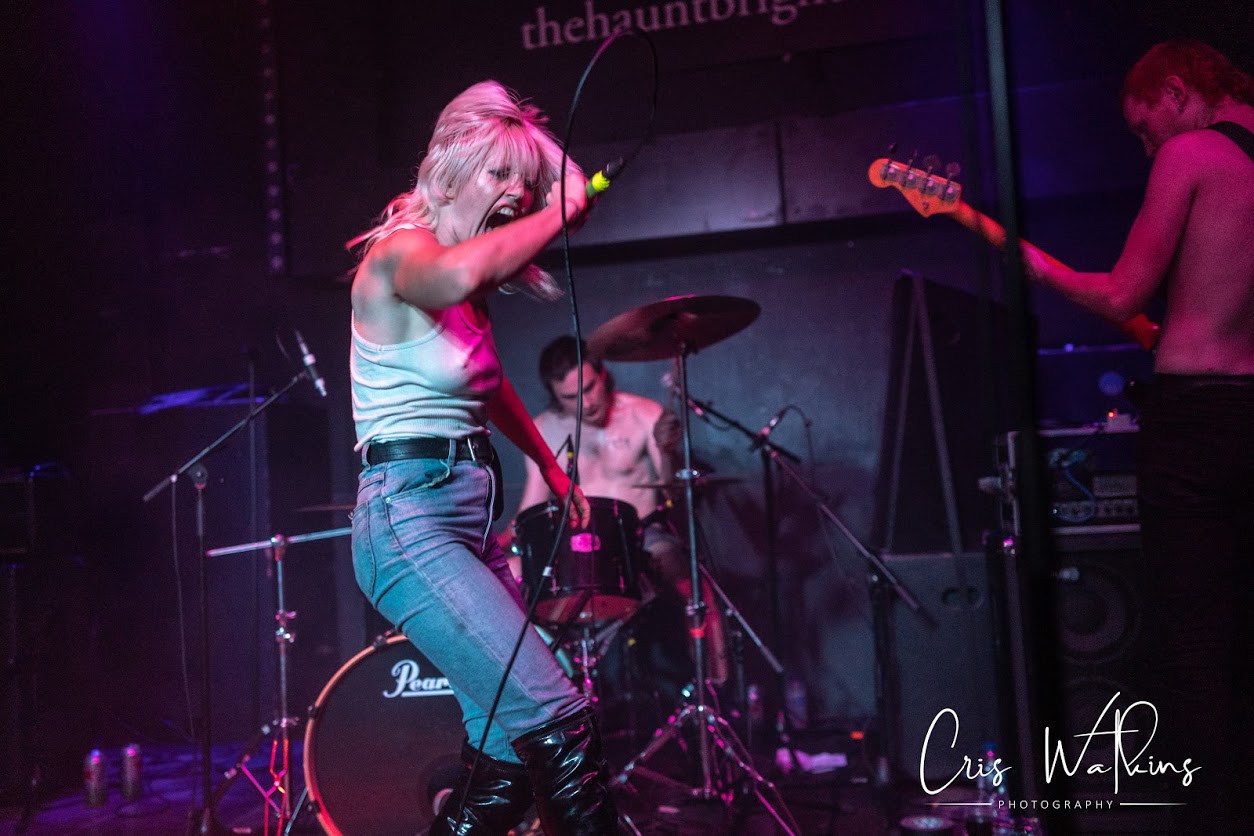 If mullet hairstyles are your thing, there’s a full quota here tonight. Dark haired guitarist Dec Martens stands black clad, thrashing away at a matching Stratocaster guitar. Gus Romer writhes and twitches, wringing a grinding bottom end from his Precision bass, and his previously short ginger crop has grown out nicely at the back into the band’s trademark hairstyle. Drummer Bryce Wilson is also rocking that retro look as he pounds away at the toms with furious gusto. Vocalist Amy Taylor has a bleached blonde mullet too, but frankly that’s not really what you notice about her. In tight jeans, shiny knee-length boots and a skimpy white top she exudes a raw animal magnetism…and she knows it. The tribulations of mainly being noticed for your looks form the basis of some of the lyrical themes, but her mischievous troublemaker demeanour and uncompromising punk attitude leave no doubt that messing with her would be like messing with a hand grenade. 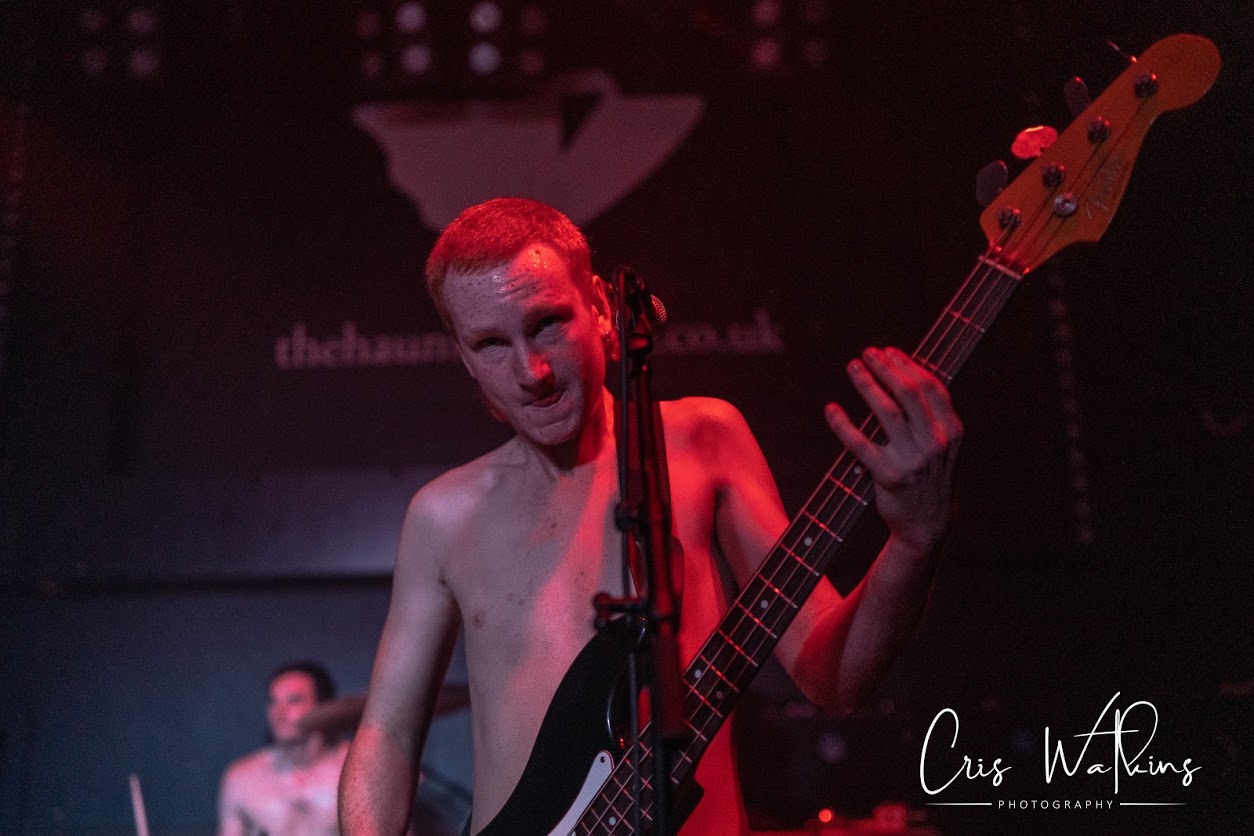 By the second number, ‘Monsoon Rock’, Amy has already disappeared into the crowd and the place has gone properly wild. The music is hard and fast punk, with massive hooks. During ‘Mole (Sniff Sniff)’ the crowd are doing the surfing and lots more beer is being flung into the air. Things are hotting up, and the bassist and drummer are soon stripped to the waist as the set thrashes on. 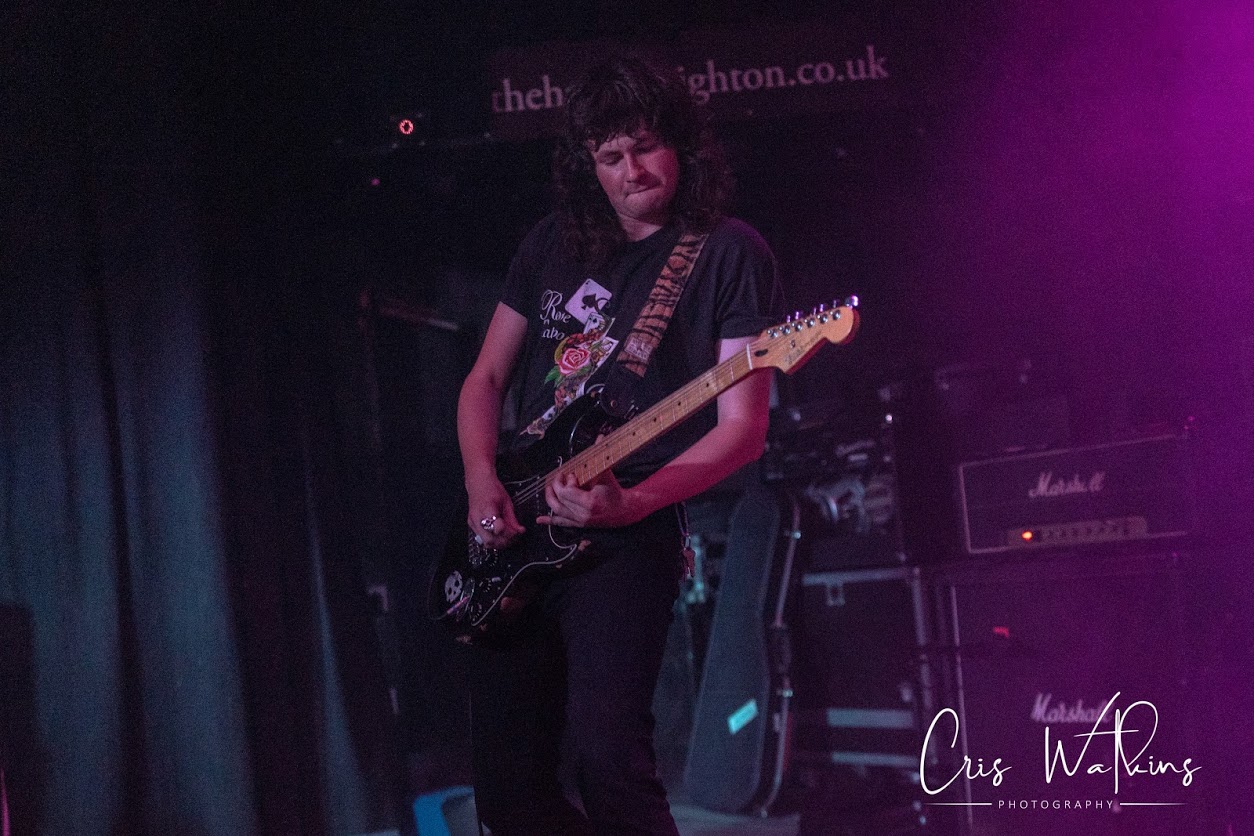 Amy is a formidable presence on stage. One moment she’s whip cracking the mic cord, the next writhing on the floor like she’s having some sort of fit. The popular ‘70’s Street Munchies’ has the whole crowd bouncing in unison. The clanging intro to ‘Westgate’ has Amy crashing a cymbal, and by the set finale ‘Some Mutts Can’t Be Muzzled’, the crowd is just one sweaty heaving mass. 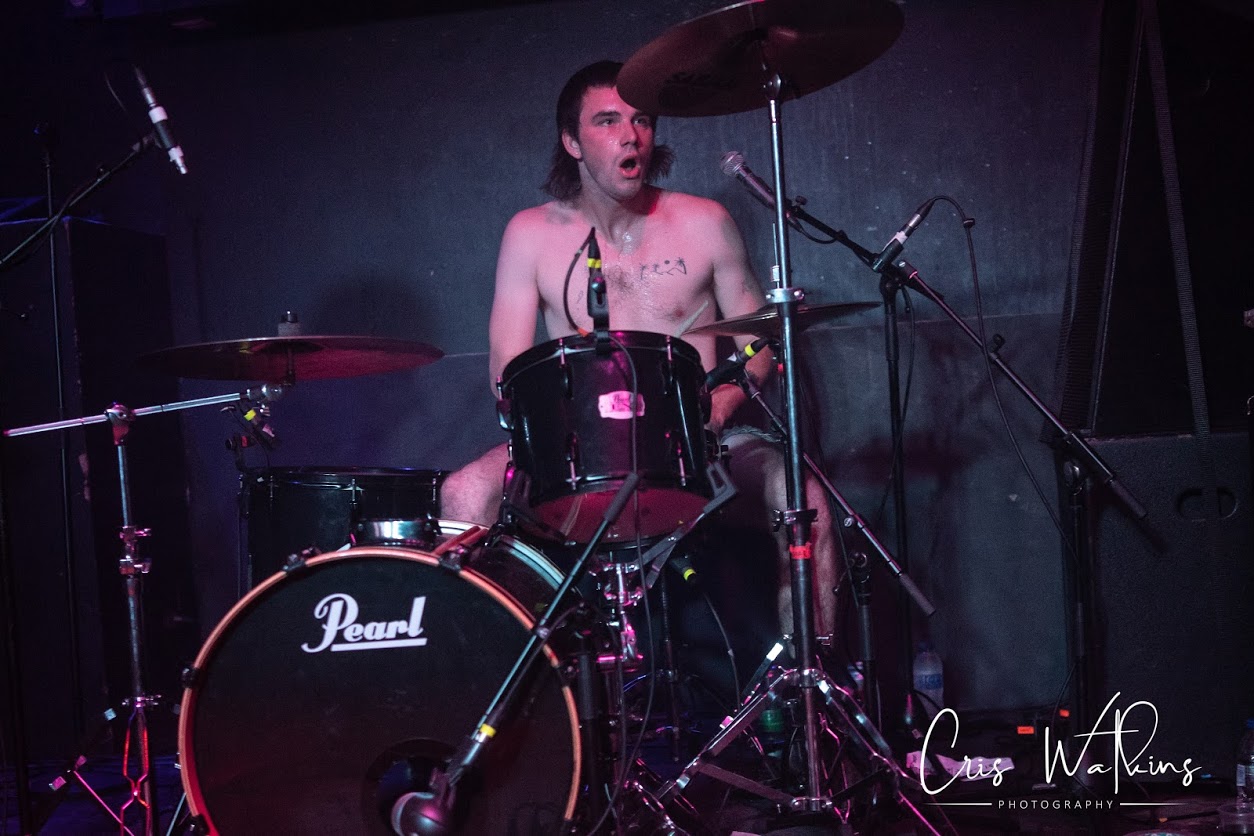 For a Sunday evening gig, this has been quite something. There is no encore, and the crowd disperses into the Brighton night, still buzzing. It was quite a show and I’m glad I was there to see it. This is a band clearly on the rise, and I imagine the next time they play in the UK it’ll be in larger venues. Their two previous EP’s, ‘Giddy Up’ (2016) and ‘Big Attraction’ (2017) have been combined onto a 12” vinyl LP available in the UK from Damaged Goods, and the band’s website announces that their debut album will be out on 24th May. 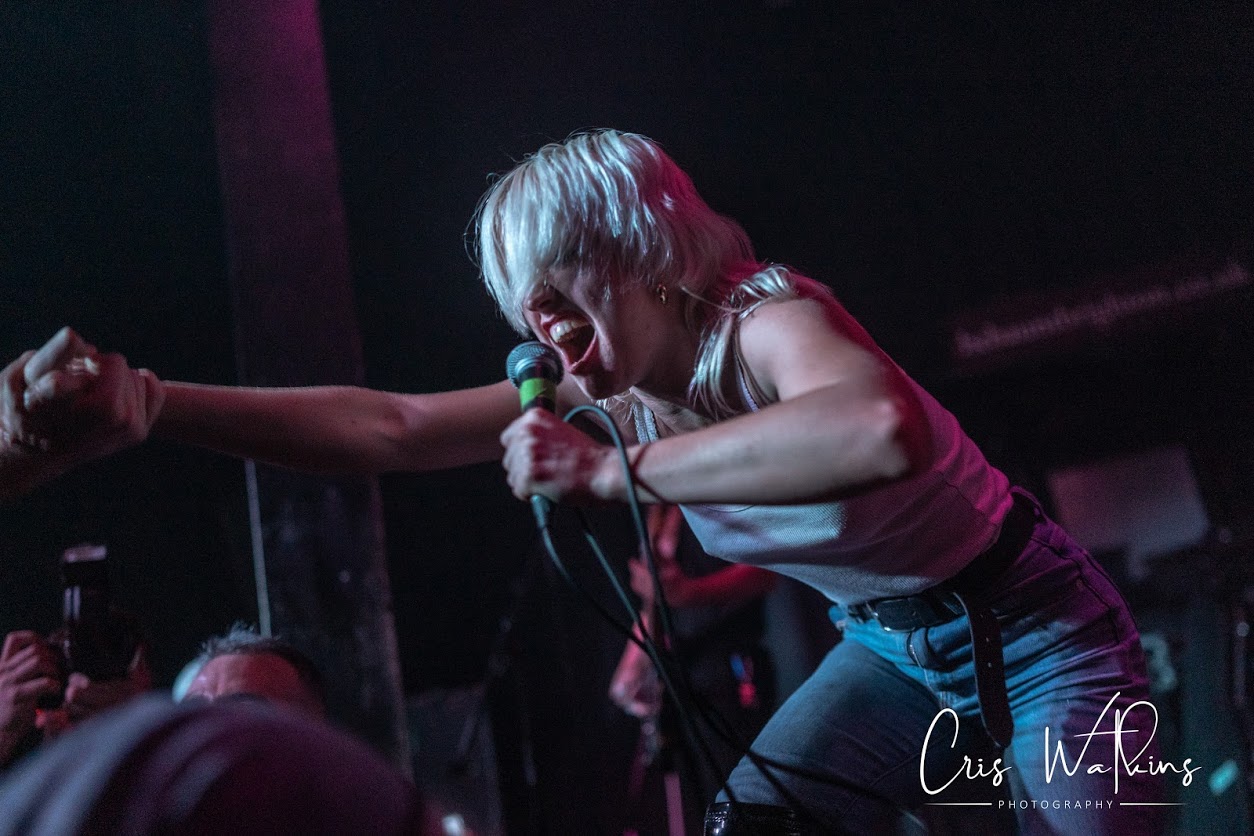 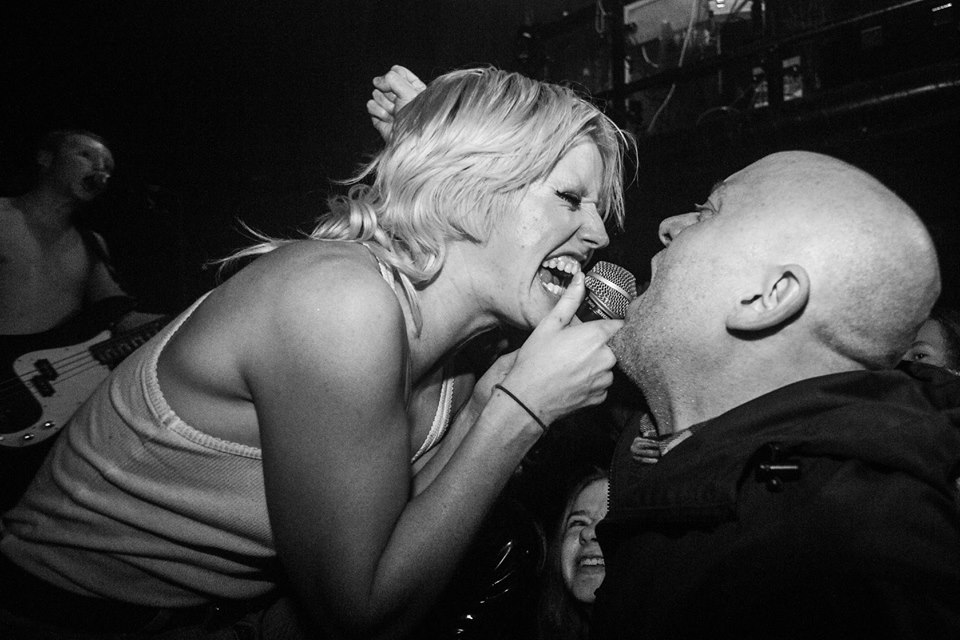 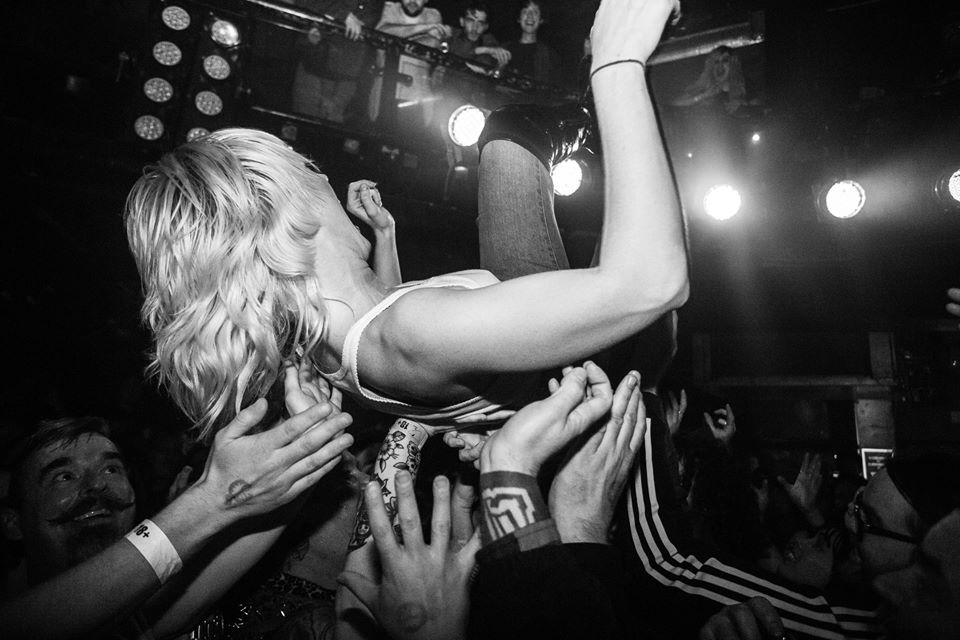 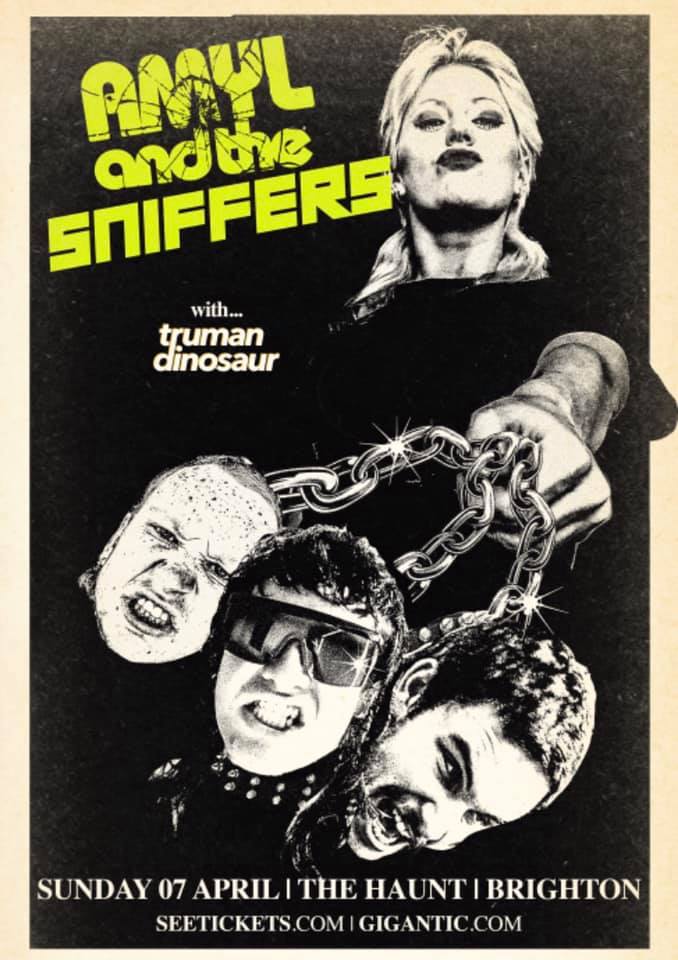