Two boys have been arrested over the theft of a bike which was taken in the centre of Brighton. 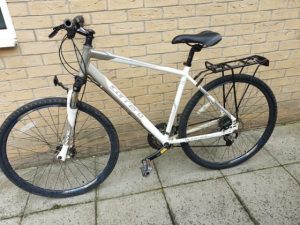 Sussex Police said that officers were trying to find the owner.

the force said: “Police have recovered this bike which was stolen from a rack in New Road, Brighton, in the early hours of Friday (12 April).

“Thieves broke the lock on the bike at around 2.30am and stole it.

“Officers arrested two teenage boys on suspicion of theft and were able to locate a grey and white Carrera mountain bike.”

Crime investigator Oliver Taylor said: “We have located the bike but need to trace its owner.

“Please get in touch with us if it is your bike or you know who owns it.”

“They have been released under investigation until 12 June.