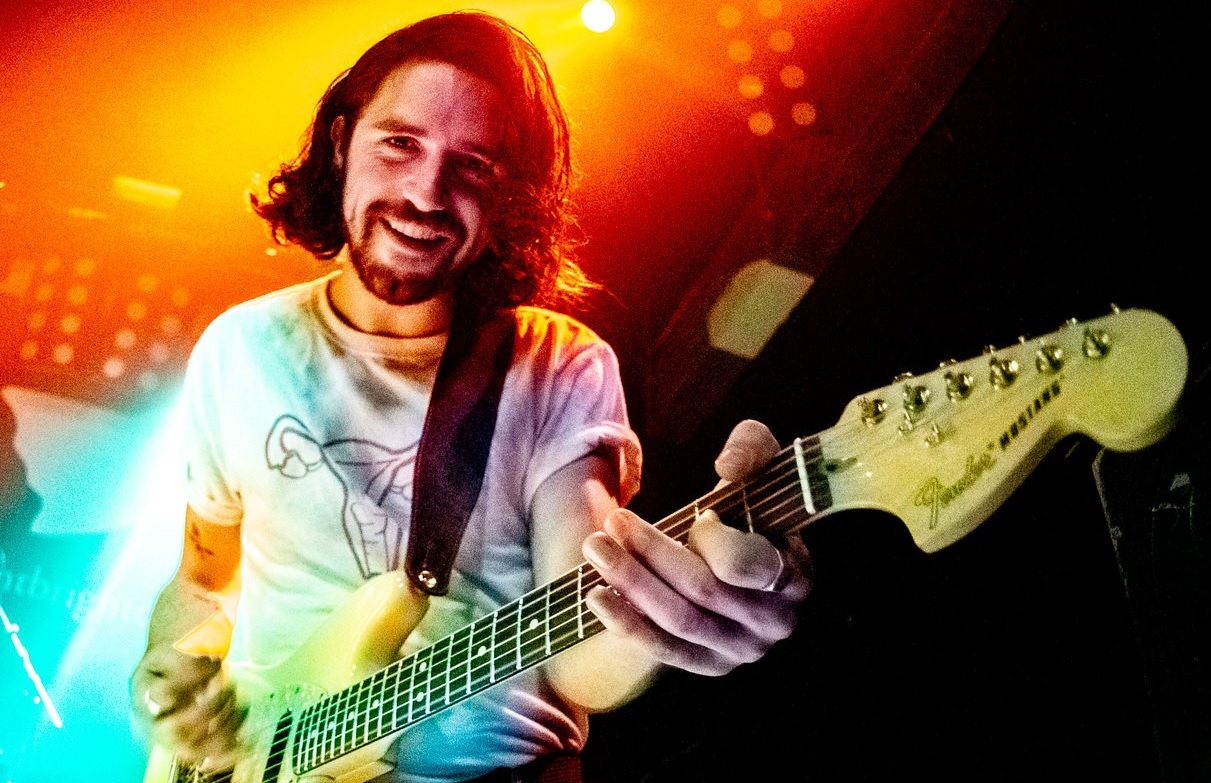 The Brighton & Hove News music team cover many concerts, but few in 2019 will carry as much anticipation and excitement as yesterday evening’s performance by Fontaines D.C. at The Haunt. 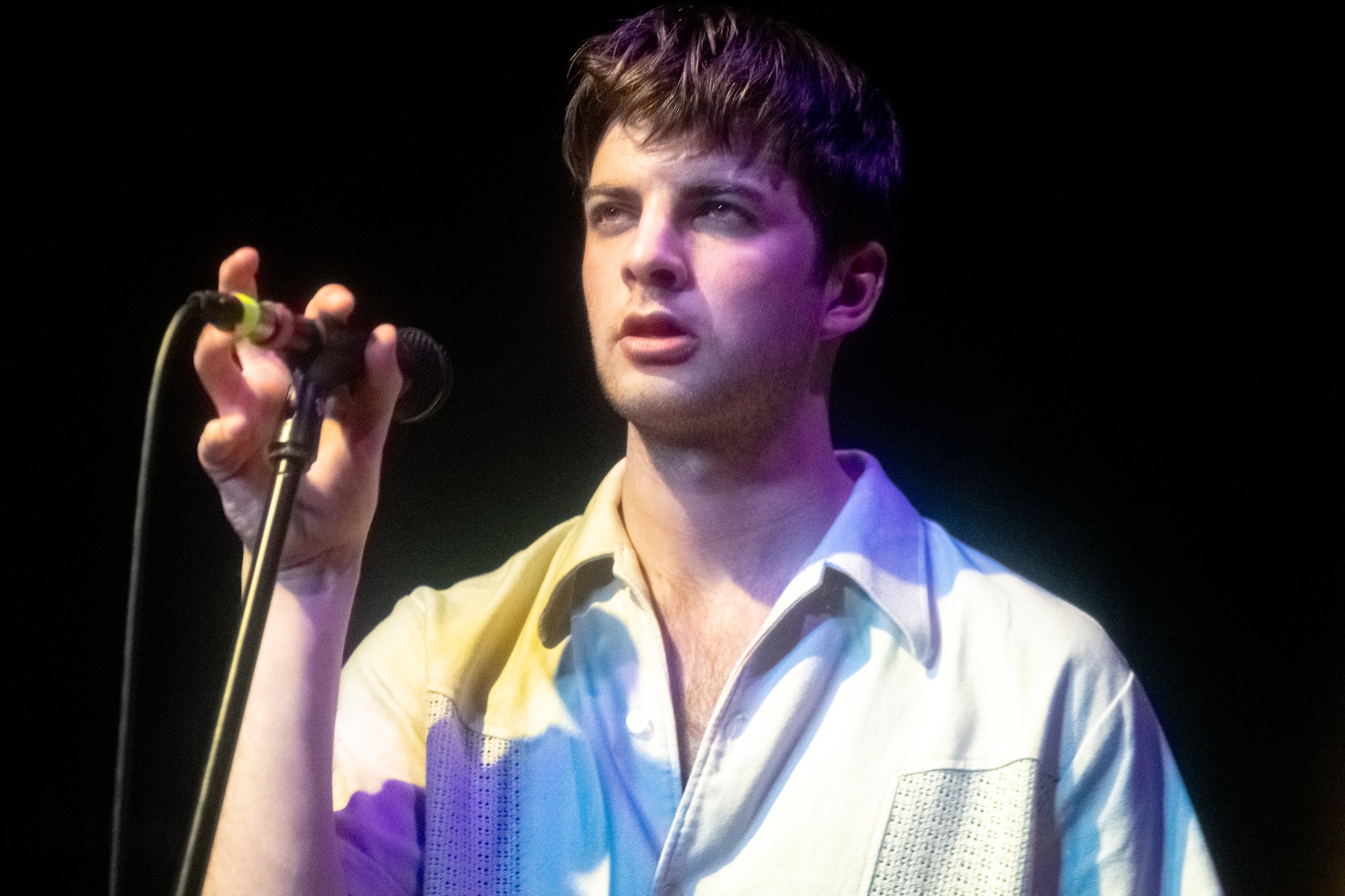 We had a very good idea of what to expect, as we were fortunate to have seen the lads performing an eleven track set last December at the smaller Prince Albert venue in town – read our report HERE. 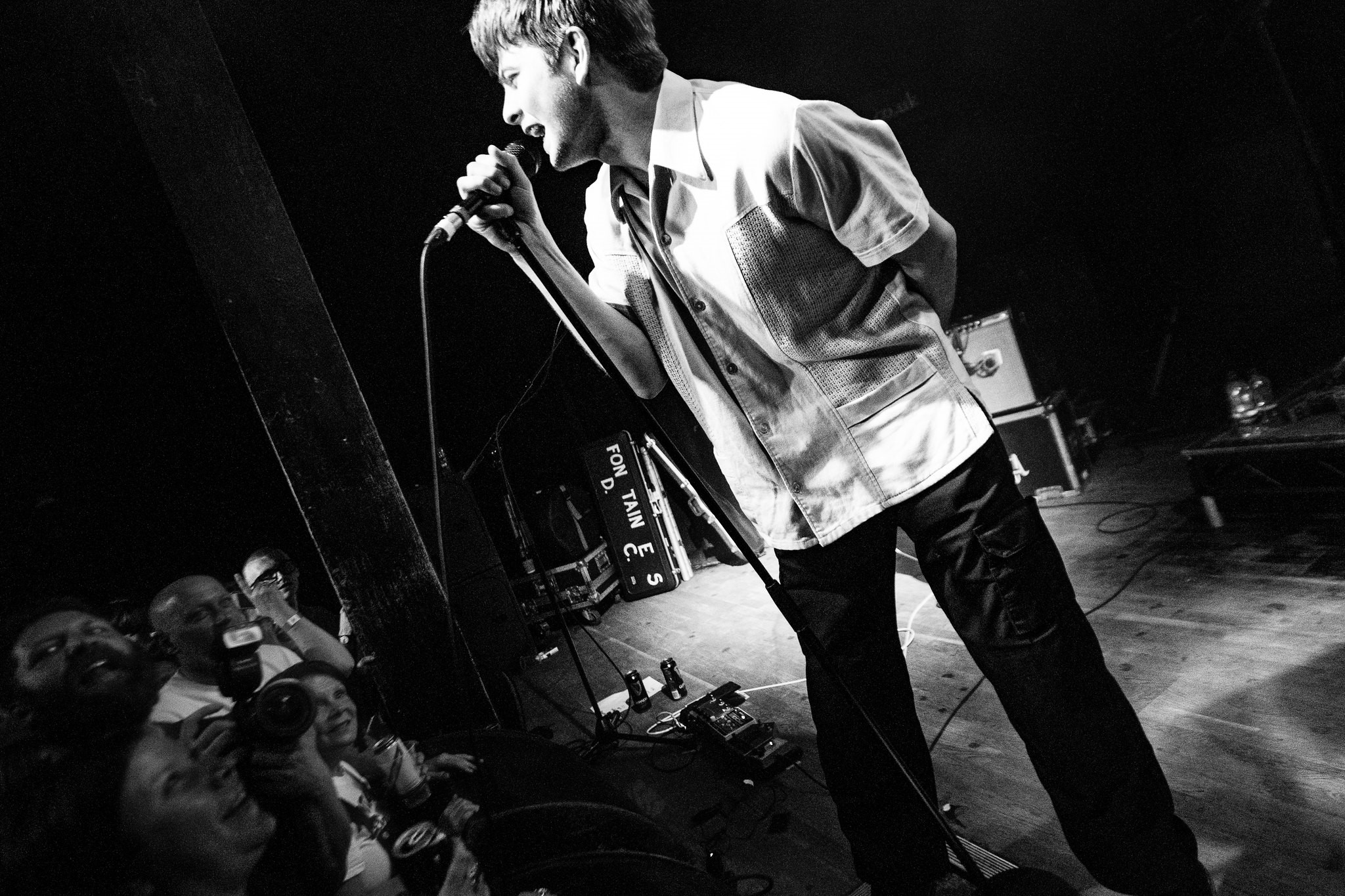 There’s certainly no denying it – Fontaines D.C. have arrived with a bang! In a week of frantic record buying by the general public because of Record Store Day (read HERE) it is certainly very impressive to report that the Fontaines D.C. debut album ‘Dogrel’ went crashing in at No.1 in the vinyl album chart, beating off David Bowie’s ‘Pin Ups’ at No.2, Pink Floyd’s ‘A Saucerful Of Secrets’ at No.3 and Bob Dylan’s ‘Blood On The Tracks’ at No.4, with the Chemical Brothers new platter ‘No Geography’ coming in at No.6. ‘Dogrel’ was placed at No.9 in the Official Albums Chart Top 100 and No.4 in the Official Irish Albums Chart Top 50. 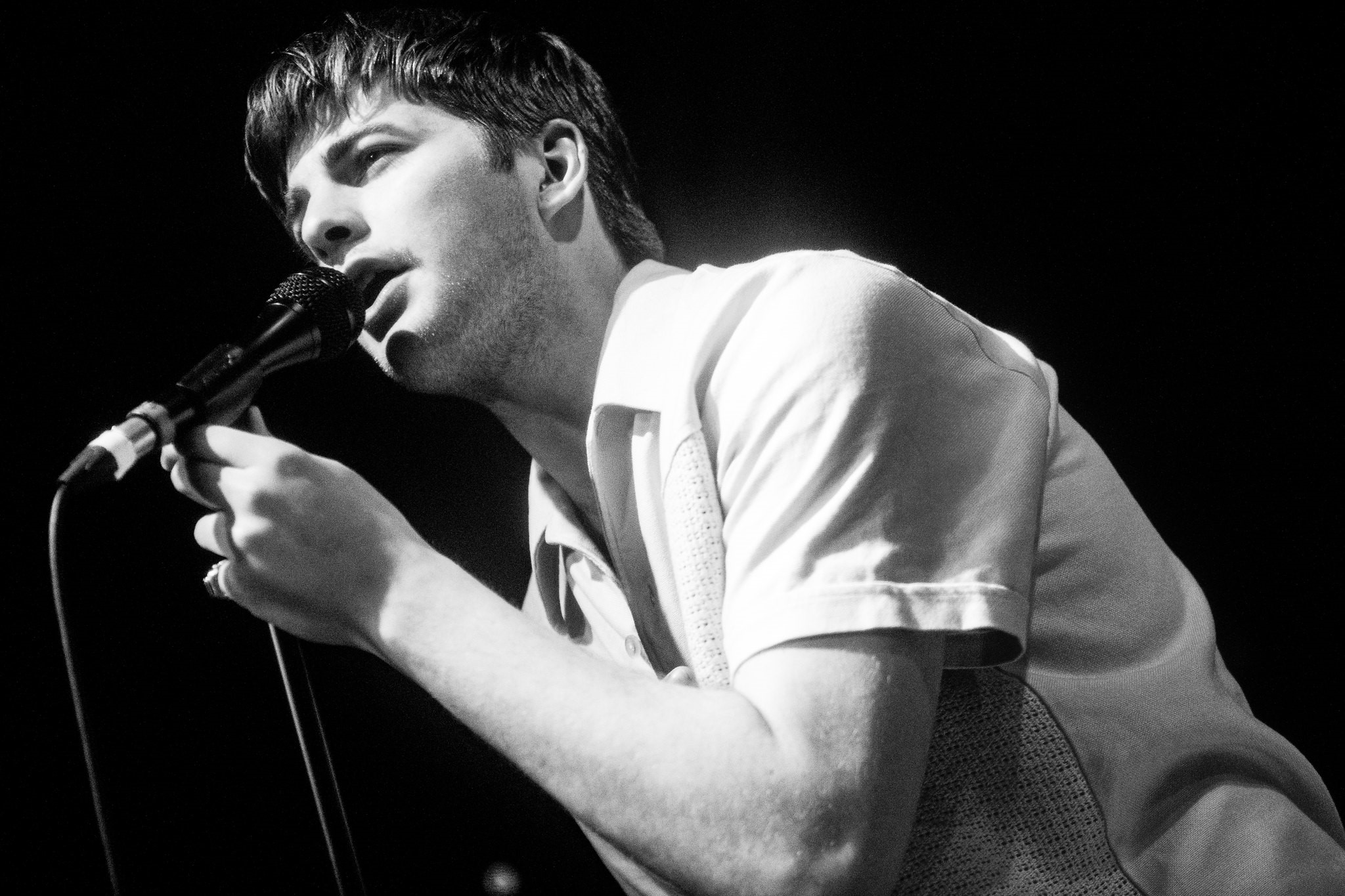 Clearly Partisan Records are over the moon with the success of their recent releases, as not only are they home to Fontaines D.C. but also IDLES, who’s 4-track ‘Meat’ EP, has secured No.1 vinyl single this week too. Partisan Records have recently signed a Montreal band called Pottery, who are going to be dropping their debut 7 track EP on 10th May, whilst they will be in Brighton performing at The Great Escape on the 9th and 11th May. 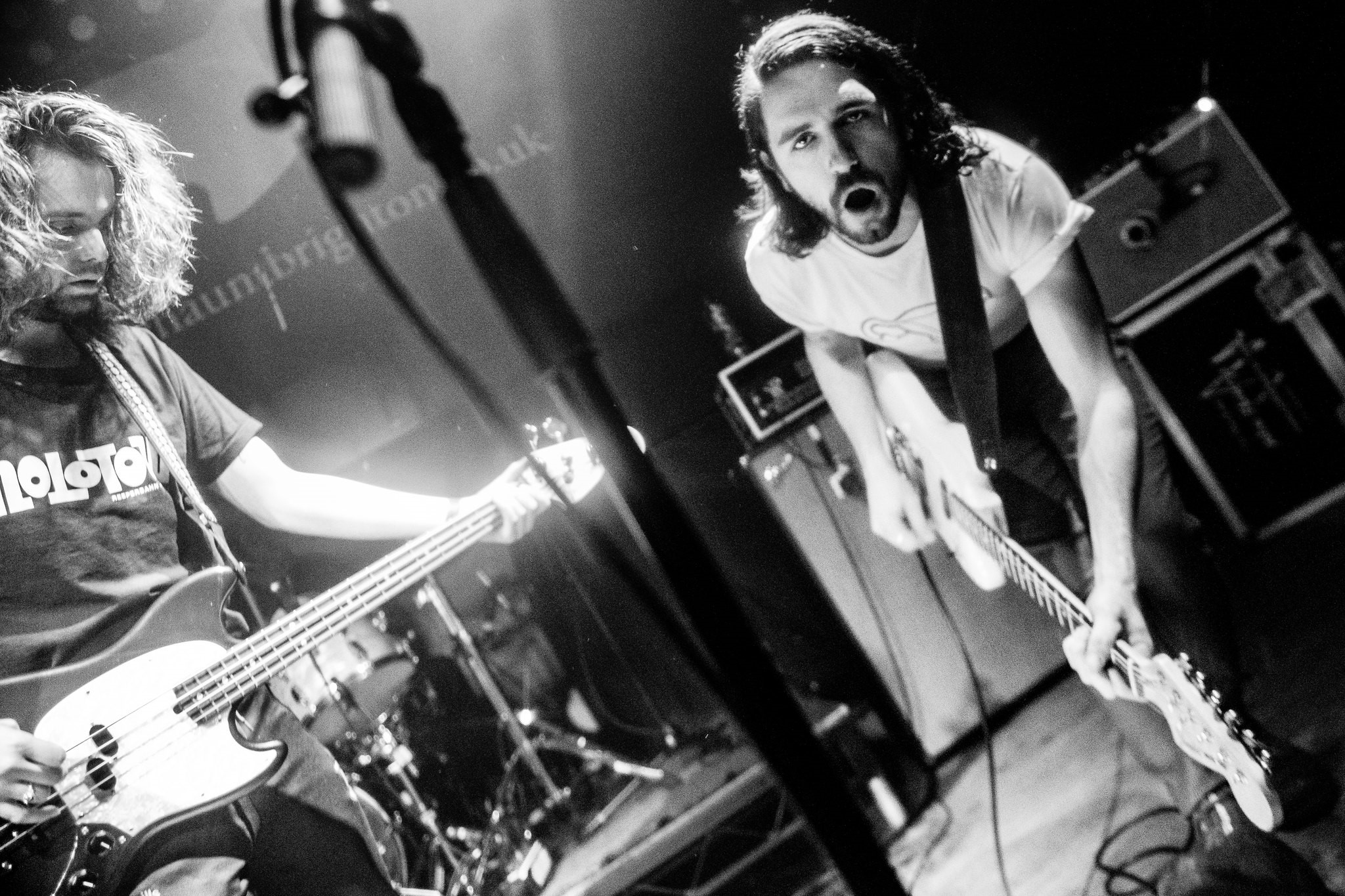 So who are Fontaines D.C? Well, they are Grian Chatten (vocals), Conor Deegan III (bass), Carlos O’Connell (guitar), Conor Curley (guitar) and Tom Coll (drums) and the lads met as a quintet in Dublin. They are influenced and driven in equal measure by the rich history of their hometown’s counter-culture, their response has been to make concise and immediately authentic post-punk, channelling often-unassumingly poetic lyrics with a distinctive gritty Irish brogue that has done anything but fall on deaf ears. 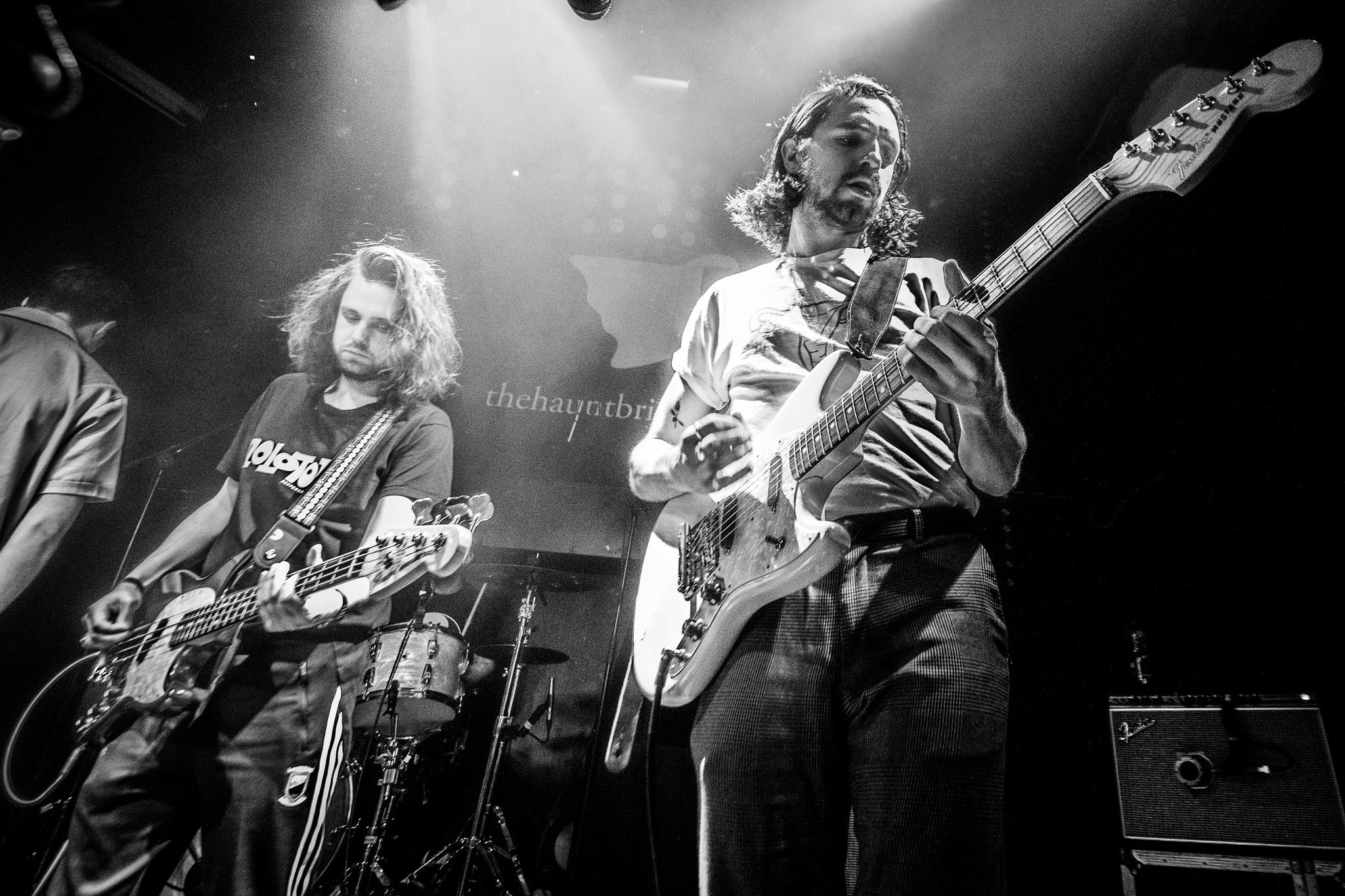 Fontaines D.C. have gone from strength-to-strength with each release and each one has come with a vast array of critical acclaim. They have secured a series of sold out live shows up and down the country, which is surely a huge statement of intent, which cannot to be ignored. 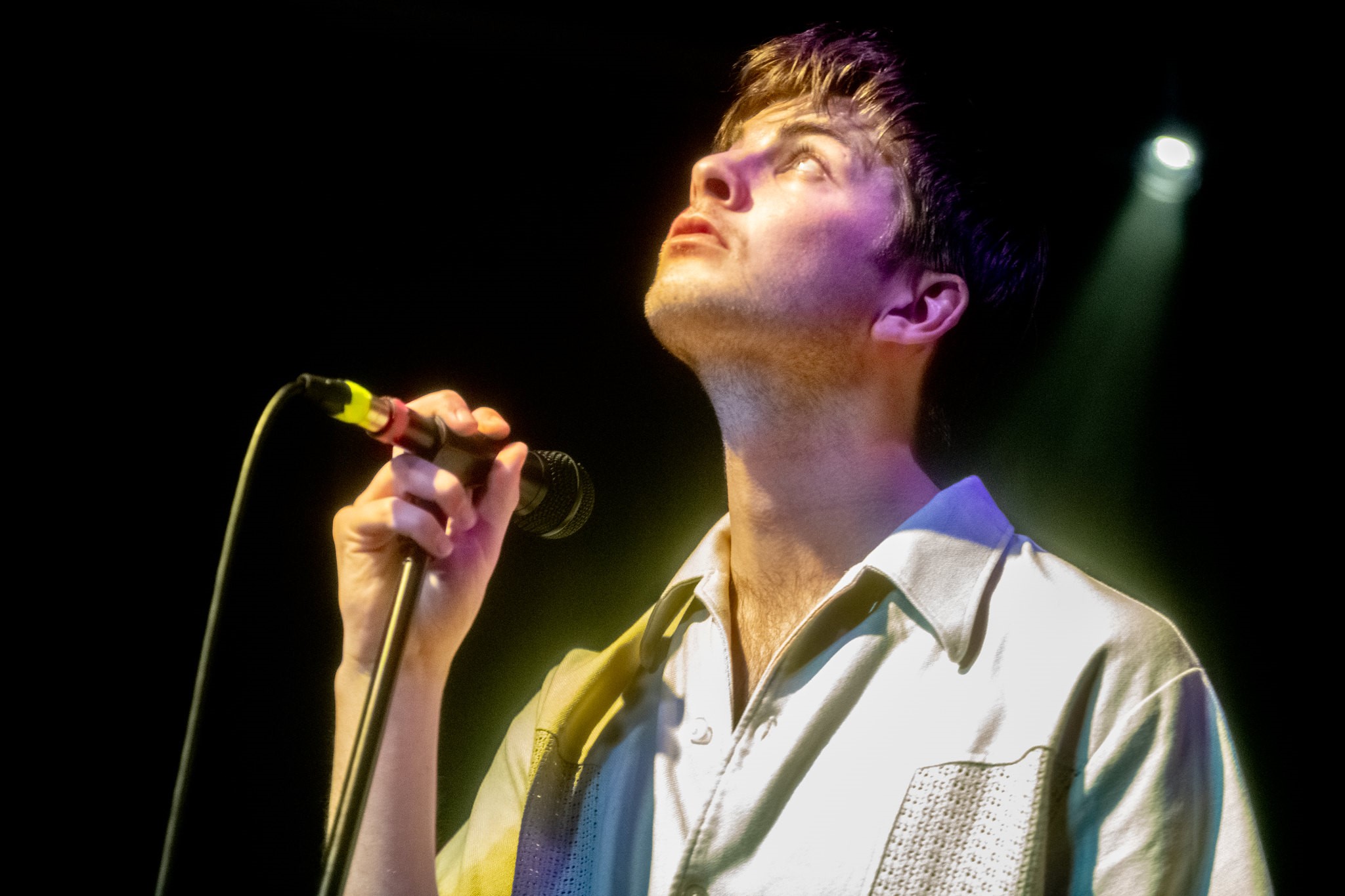 Not only is yesterday’s Haunt show sold out, but they have already booked a return date to Brighton to appear at the larger Concorde 2 on Thursday 28th November, and guess what? That’s already sold out! It’s obvious that the gig going public in Brighton know a great band and certainly rally around their mates and the tickets go flying out of the door. 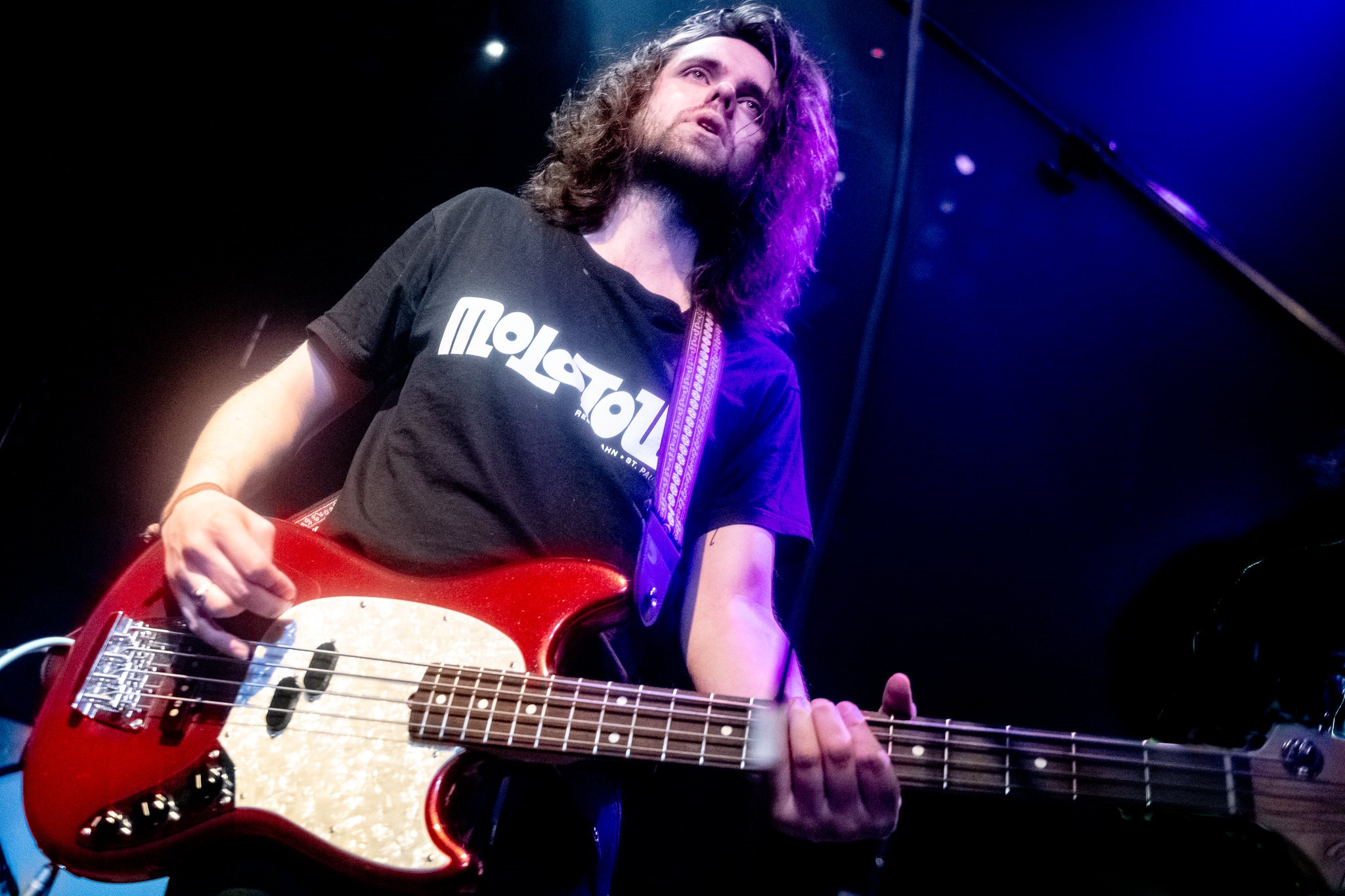 To me, the Fontaines (as they were originally known) are a quality act and already their ‘Dogrel’ album feels like a greatest hits package, as it has seven previous and current singles contained within the eleven cuts. There’s versions of ‘Hurricane Laughter’, ‘Boys In The Better Land’, ‘Chequeless Reckless’, ‘Too Real’, ‘Liberty Belle’, ‘Roy’s Tune’, and ‘Big’. It’s an instant classic album. 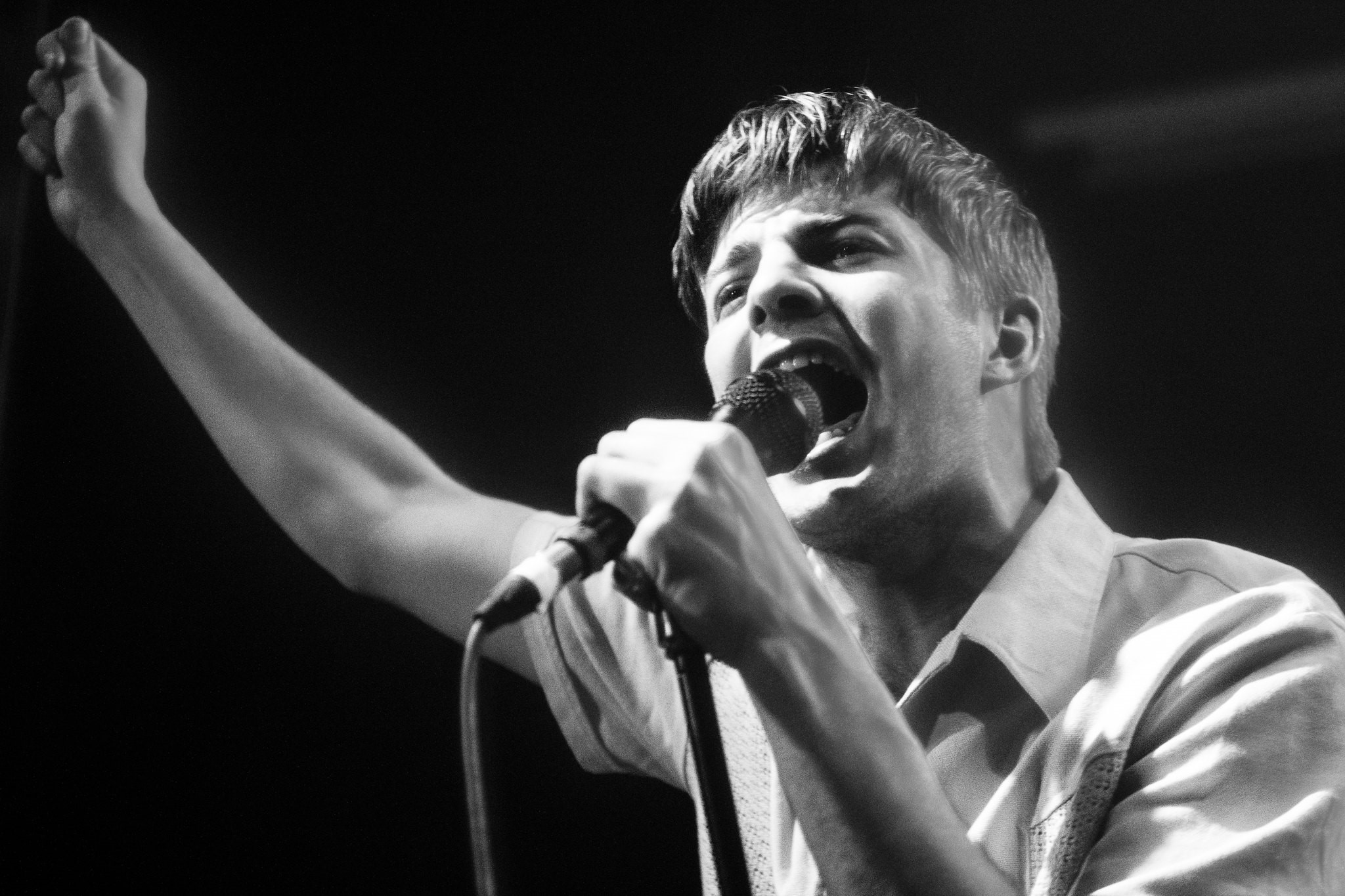 If you wish to have some idea of have good these lads are live then simply WATCH THIS. 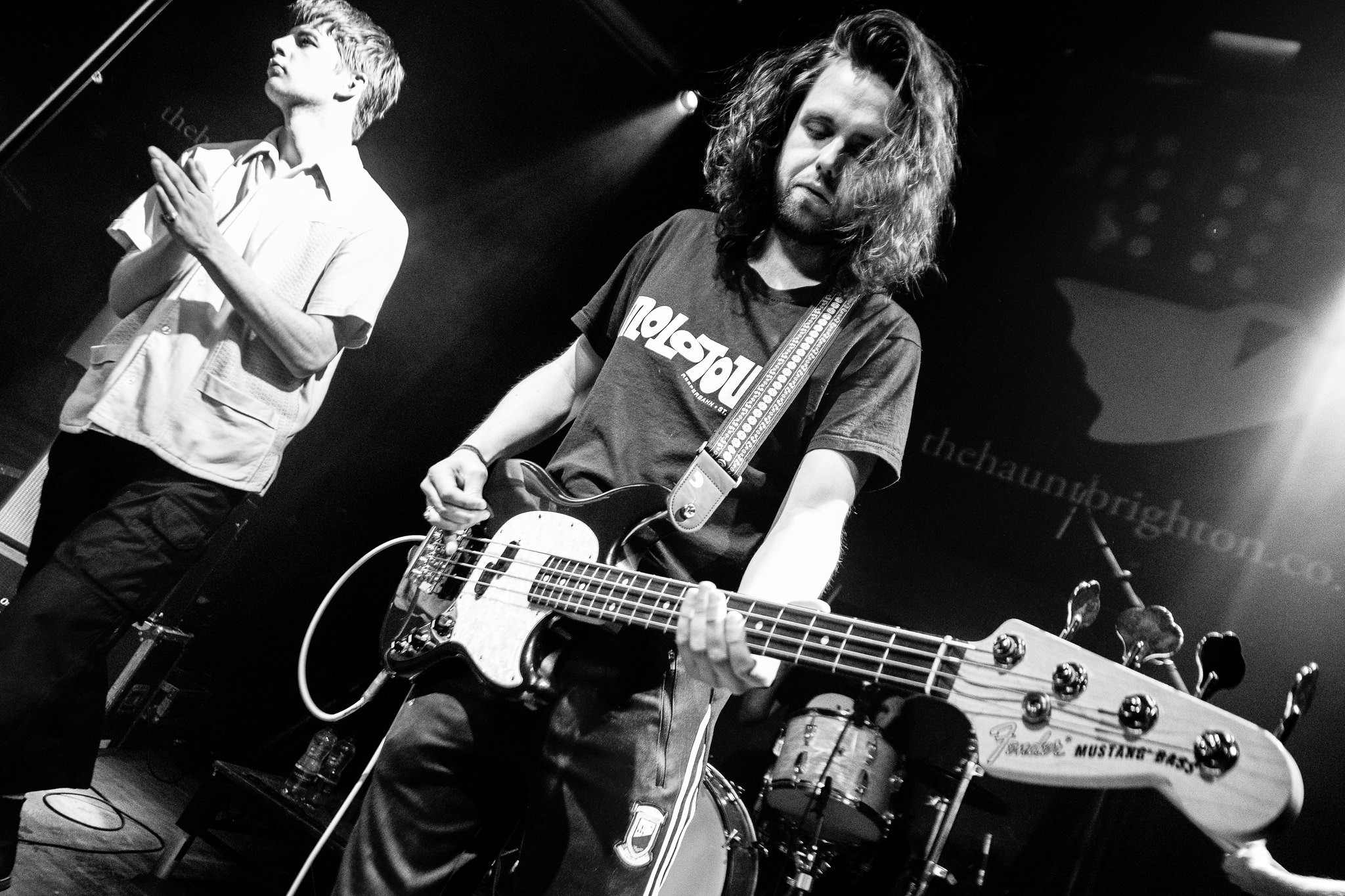 It would appear that I’m not the only person raving about the band. Read the previous praise for Fontaines D.C below:

“With one foot in the shambolic anarchy of The Pogues, and the other in a
Las-esque lilt, Fontaines D.C are messy but melodic in the best way possible” – DIY

“I’ve played this about 15 times since yesterday. It’s a little bit like hearing Idles for the first time. I really think there’s something here” – STEVE LAMACQ (This is EXACTLY how I felt too!)

“The energy, the urgency and the emotion of these brilliant new songs made me stand up and take notice that this is the band I’ve been waiting for” – KEXP 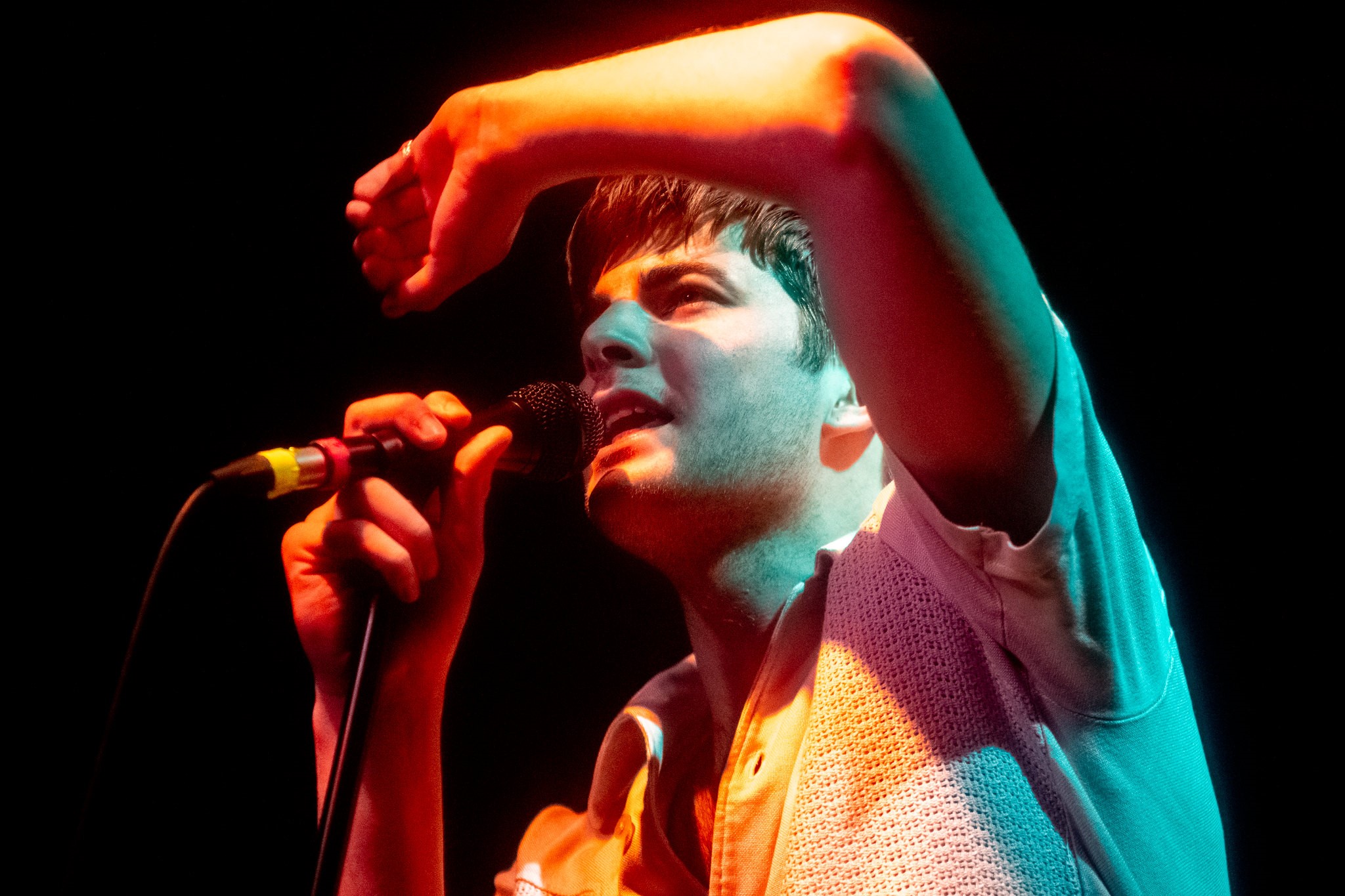 Back to yesterday’s performance and the band were certainly bang on the money. They performed all eleven songs from their ‘Dogrel’ album, but just in a different order. I would have truly loved a few extra numbers that don’t appear on the album such as ‘Winter In The Sun’ from the ‘Hurricane Laughter’ single, ‘The Cuckoo Is A-Callin’’ from the ‘Too Real’ single and ‘Rocket To Russia’ from the ‘Liberty Belle’ single, as these tracks are only two or three minutes long, but hey it wasn’t to be. 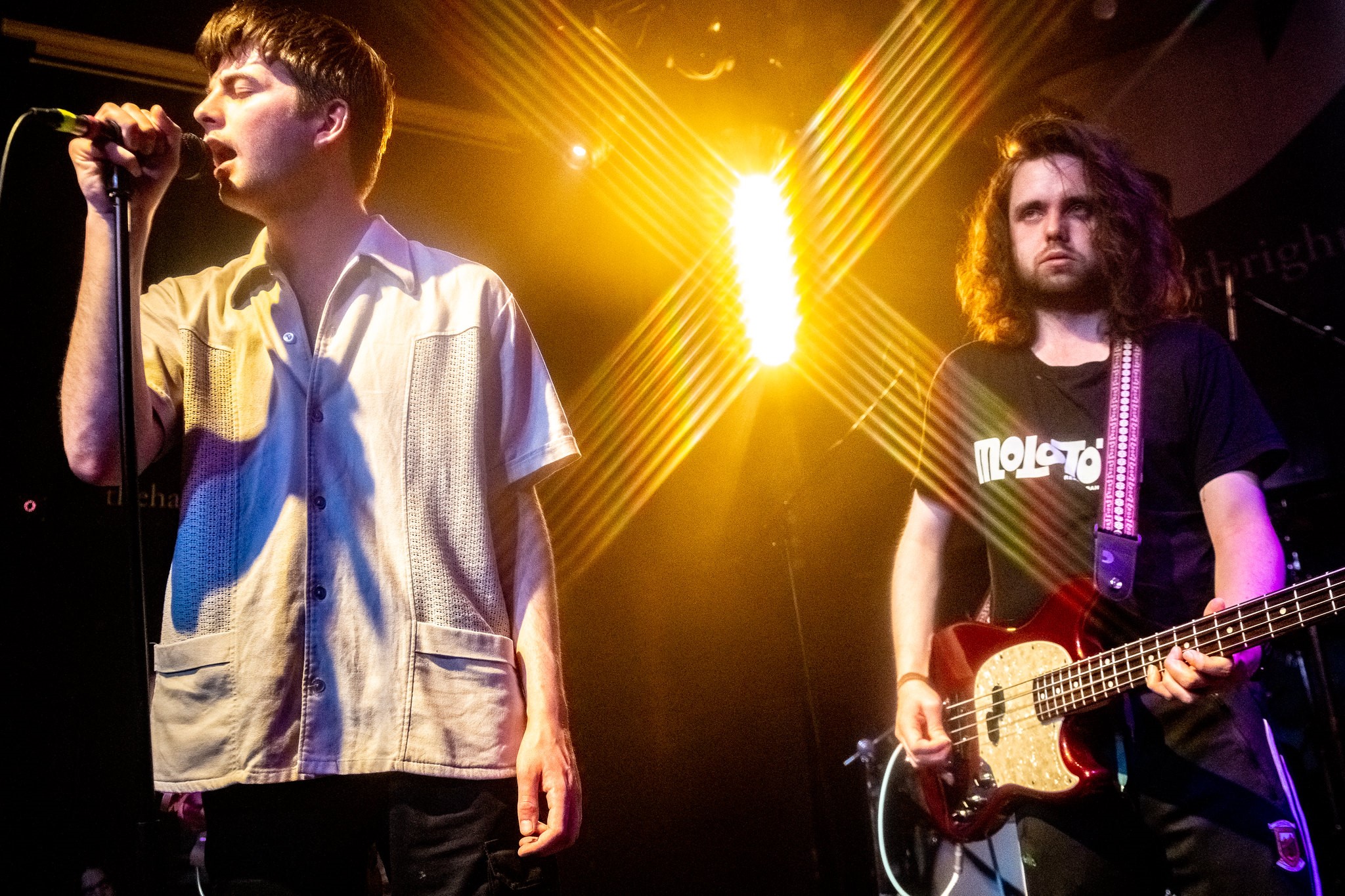 Having primed the crowd with tunes from The Modern Lovers, Iggy Pop and the like, it was time for the lads to take to the stage. Once there they just got on with it and the crowd including myself were one happy moshpit army. Singer Grain with his unmistakably Irish brogue did his usual prancing up and down caged animal routine whilst shaking his wrists. His actions and looks seriously reminds me of the dearly parted Ian Curtis of Joy Division, he just has one of those iconic faces. 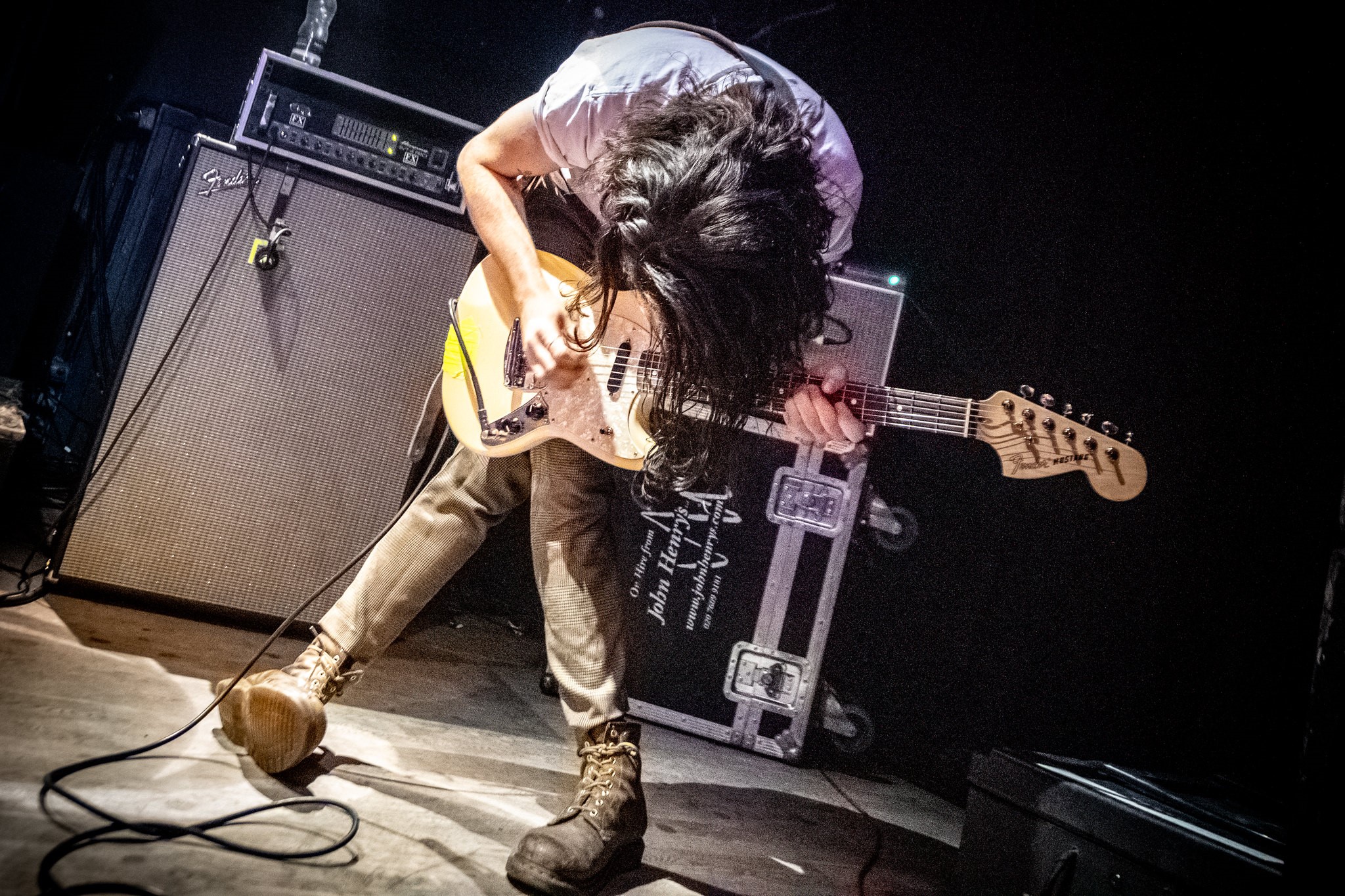 Drummer Tom leads the tunes with his terrific rhythmic beats, which also have the feel of (Stephen Morris) Joy Division and the others follow. Many of the crowd were singing along to the tunes and it was one big happy family, which I noted was made up of quite a number of individuals that I had previously seen at the recent IDLES Brighton Dome concert, which we reviewed no less than three times including a review from punk legend Jordan – read her report HERE. 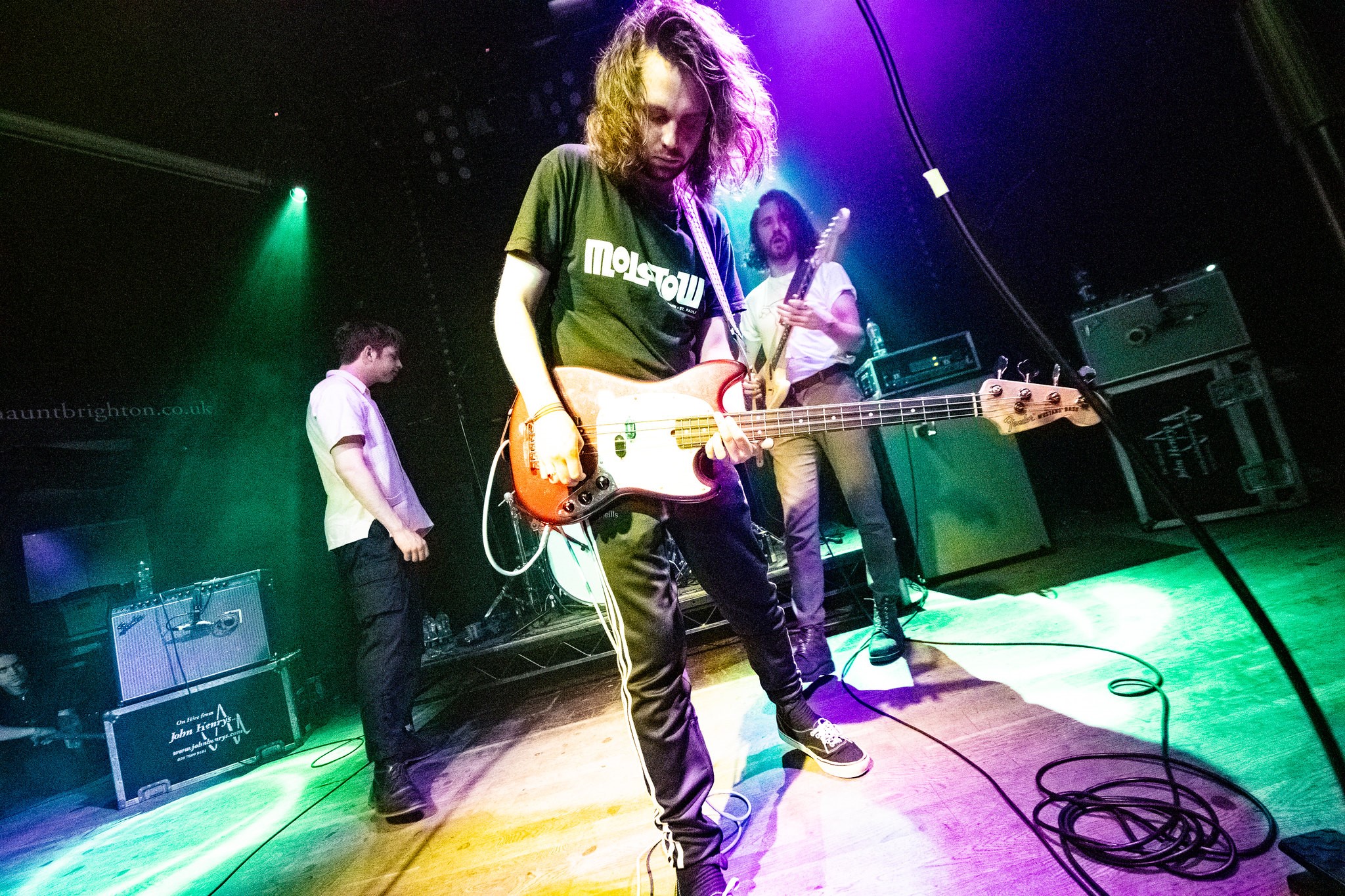 Fontaines D.C. delivered time and time again last night and were anchored to the stage during the whole performance with the exception of guitarist Carlos who decided at one stage to climb up onto the speaker for a birds eye view of his adoring public. Clearly he had been watching IDLES perform when the Fontaines had been on tour with them. 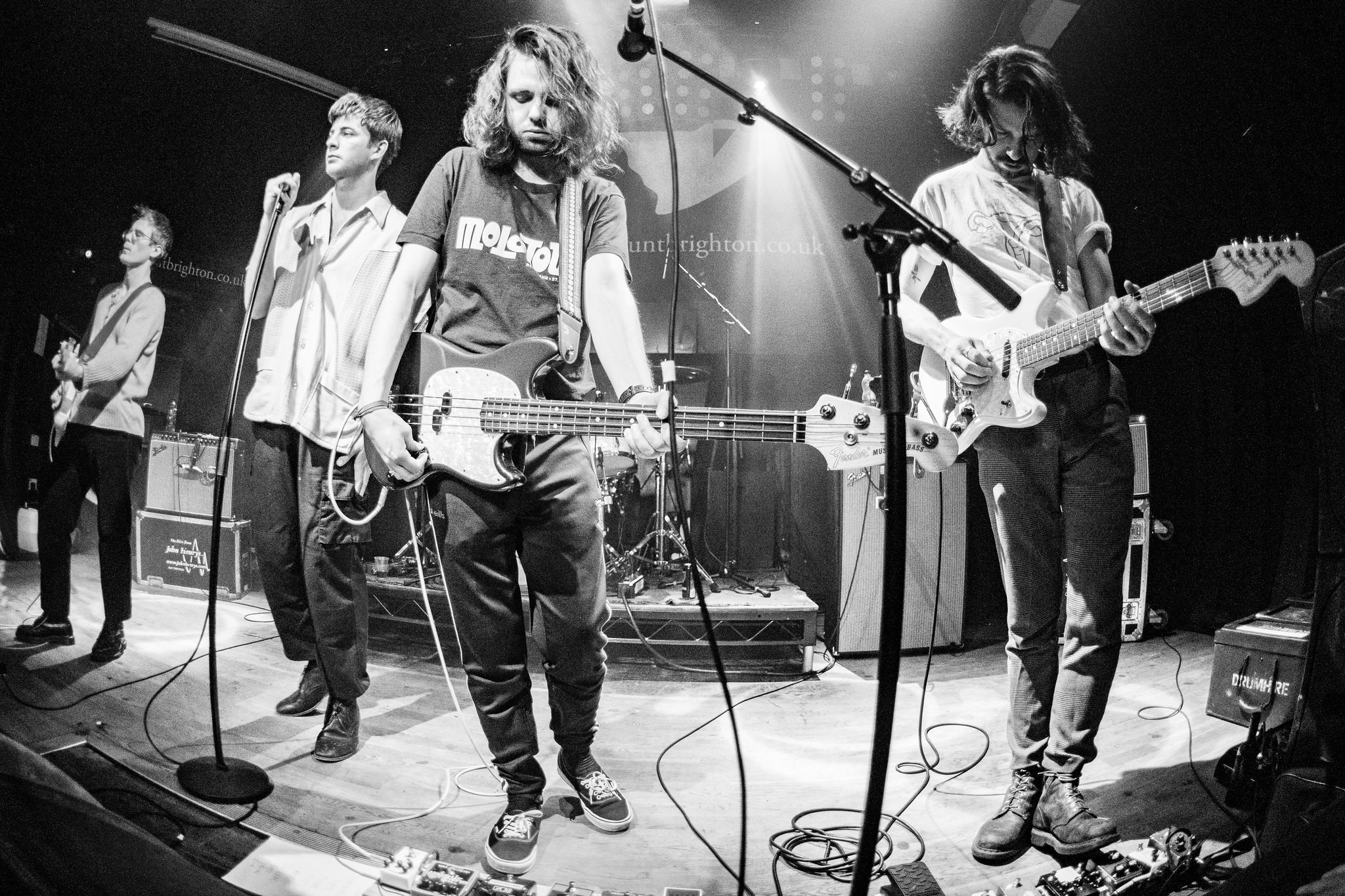 So at the end of the year, we will be heading to the sold out Concorde 2 to see them again live, but no doubt in 2020, they will be returning again, but expect them to be playing at the Brighton Dome or even the Brighton Centre. 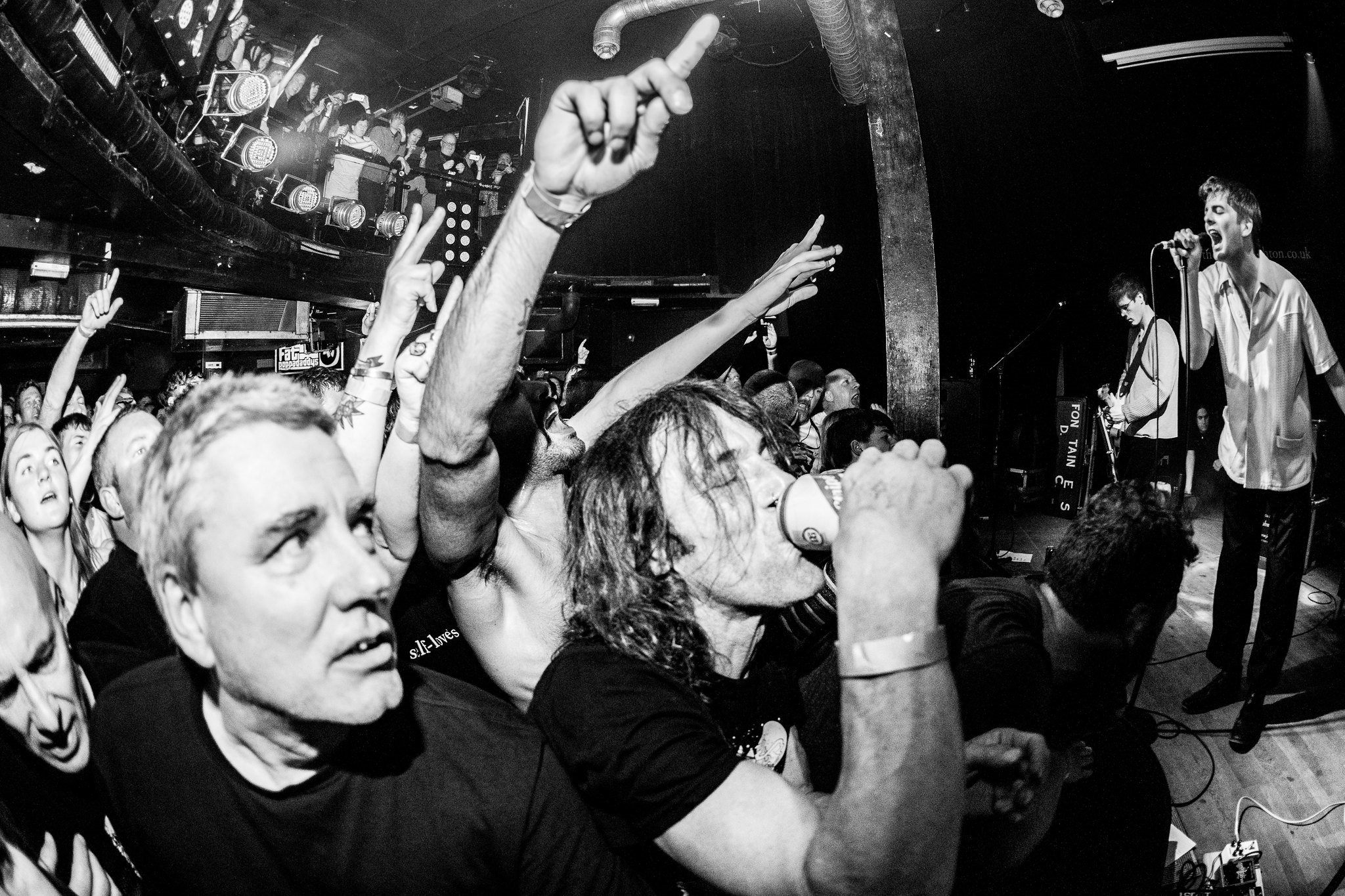 A couple of the Brighton & Hove News music team (far left) in amongst the action at The Haunt, Brighton 18.04.19 (pic Sara-Louise Bowrey Photography) 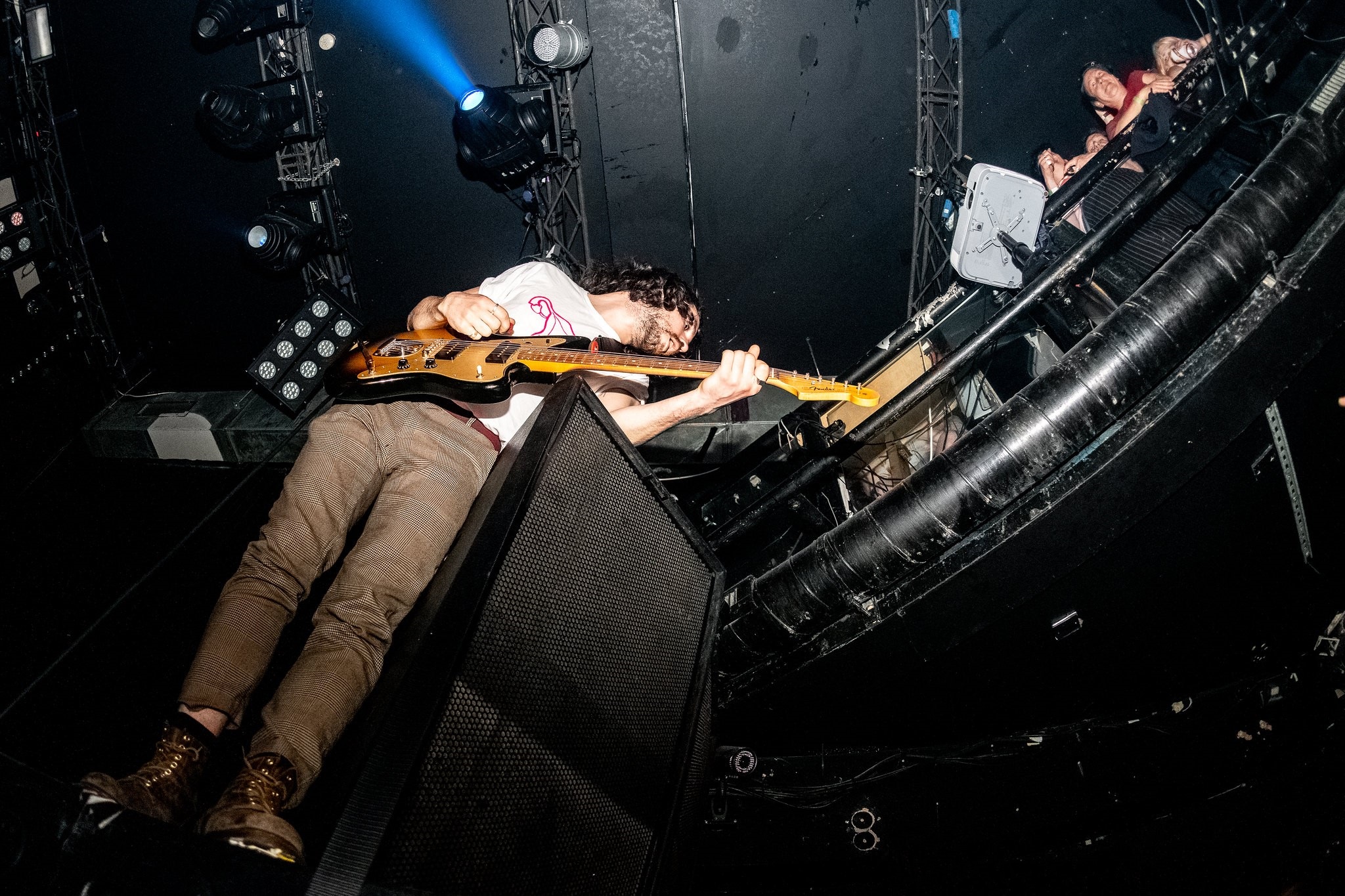 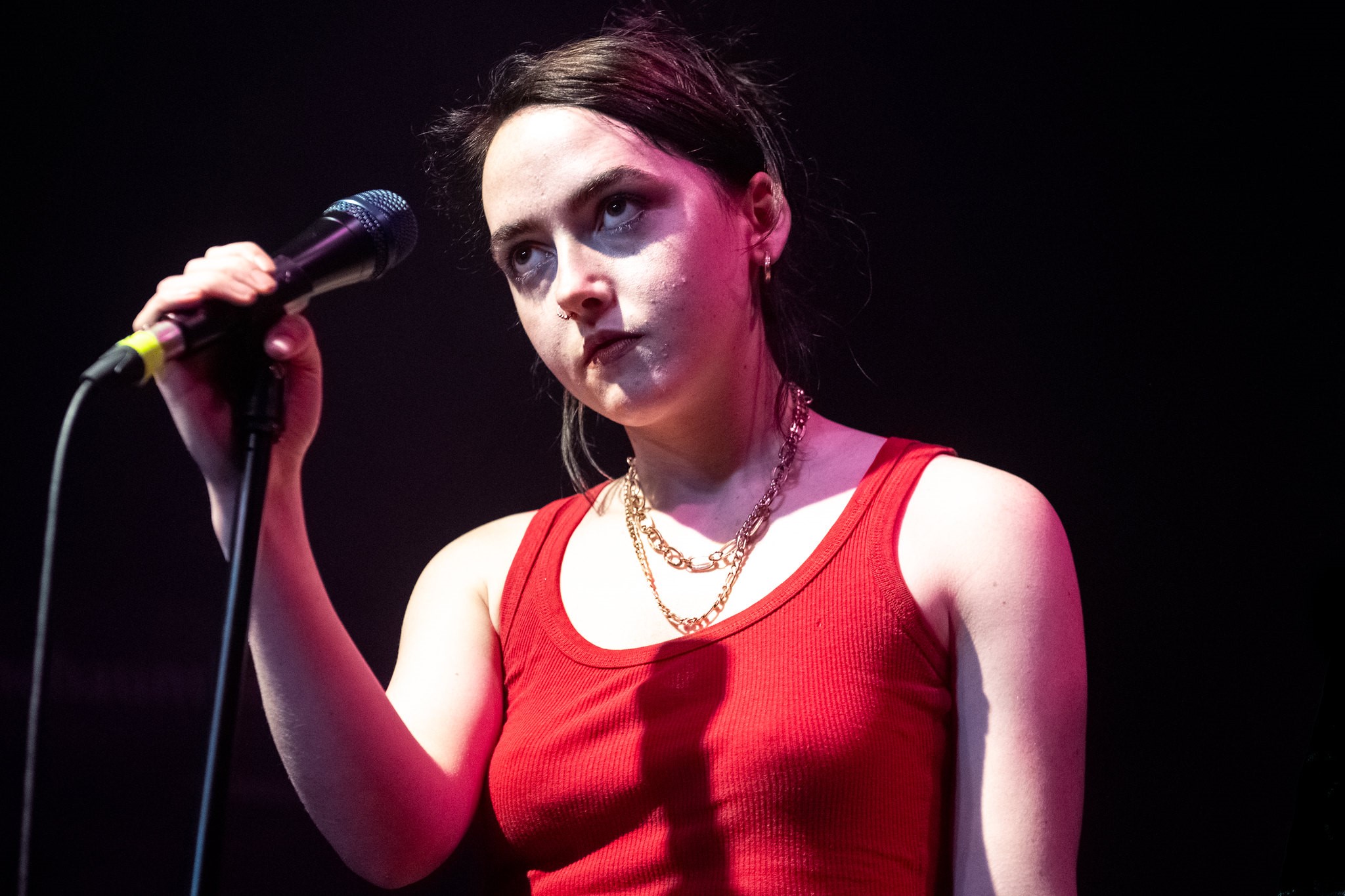 Support came in the form of Just Mustard who are a young 5-piece outfit from Dundalk in the Republic of Ireland located near the border with Northern Ireland. They are a bit of a mysterious lot, who clearly let their music do the talking for them. 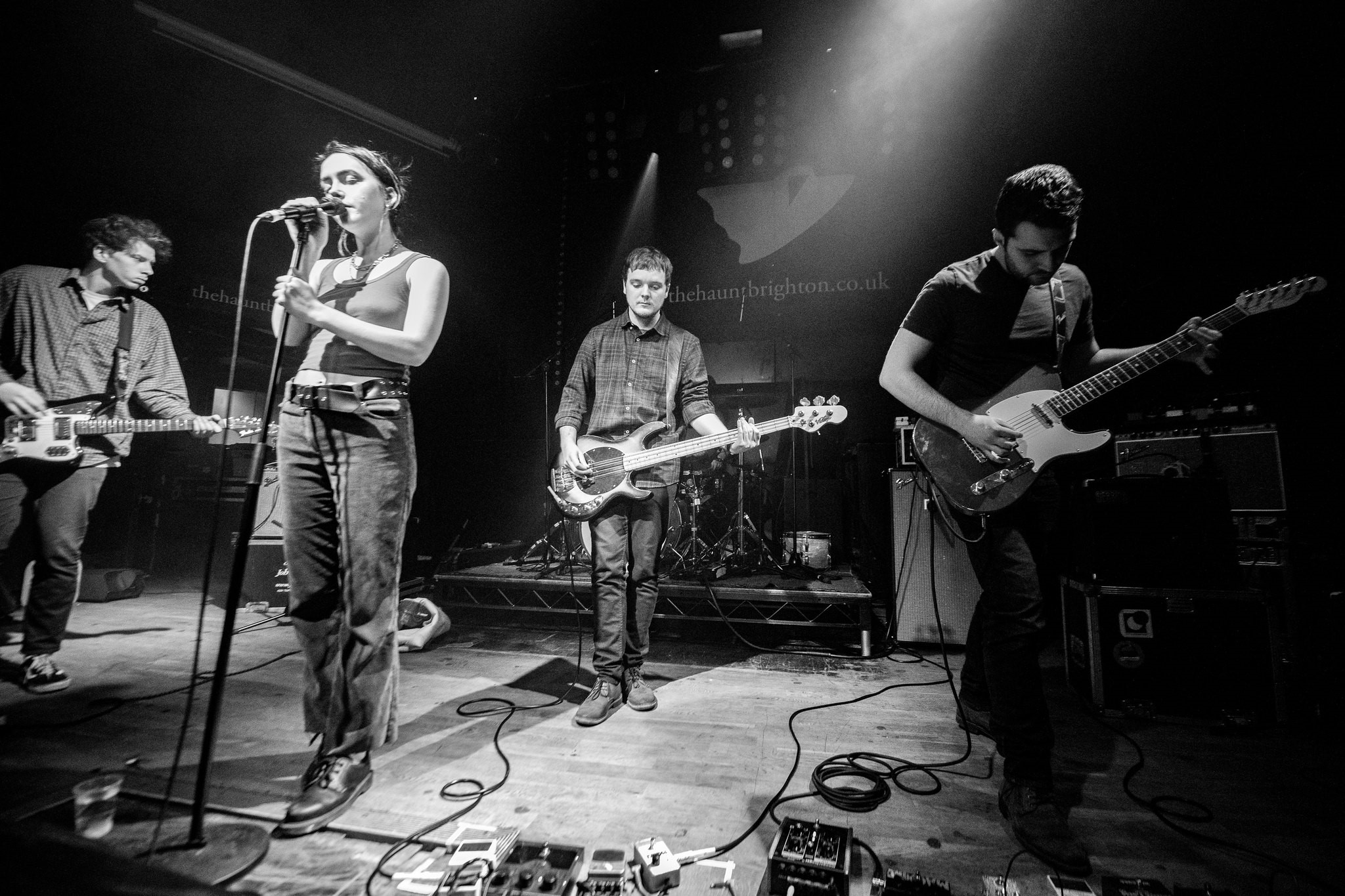 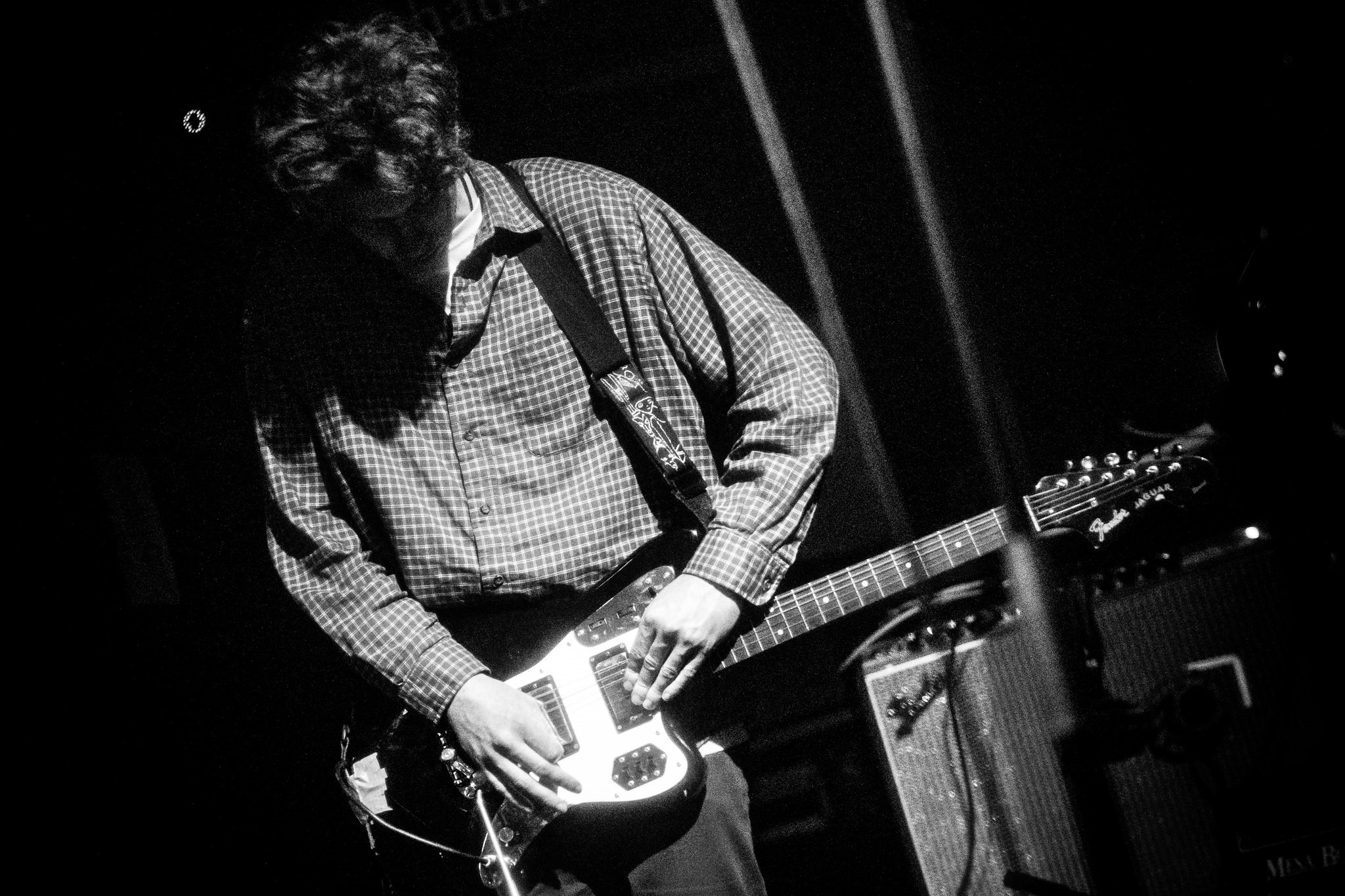 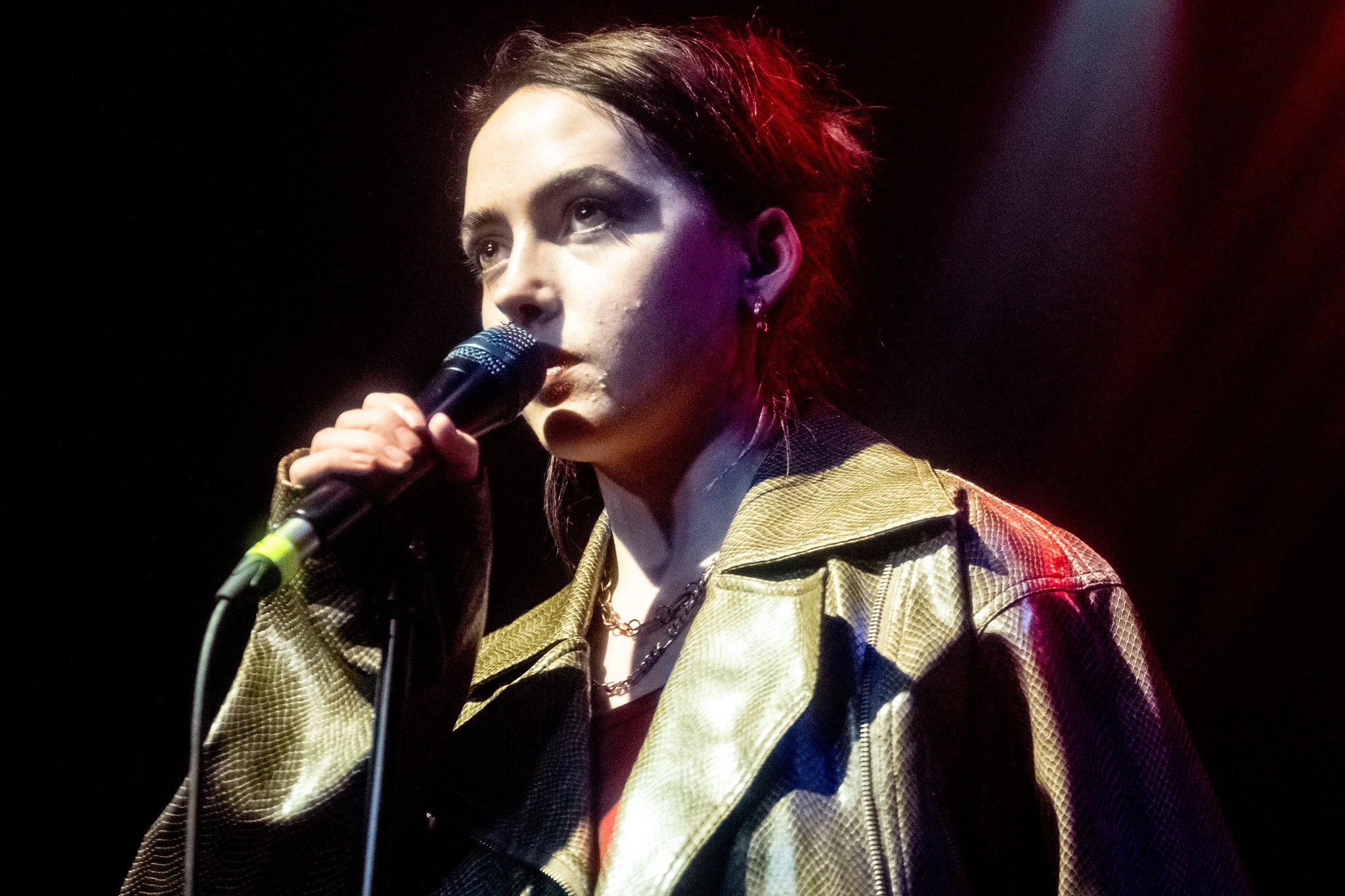 This is the type of music that has no doubt taken inspiration from the likes of the Cocteau Twins, Slowdive and Ride, therefore if you are a follower of any of these said bands, then Just Mustard will cut the mustard for you. 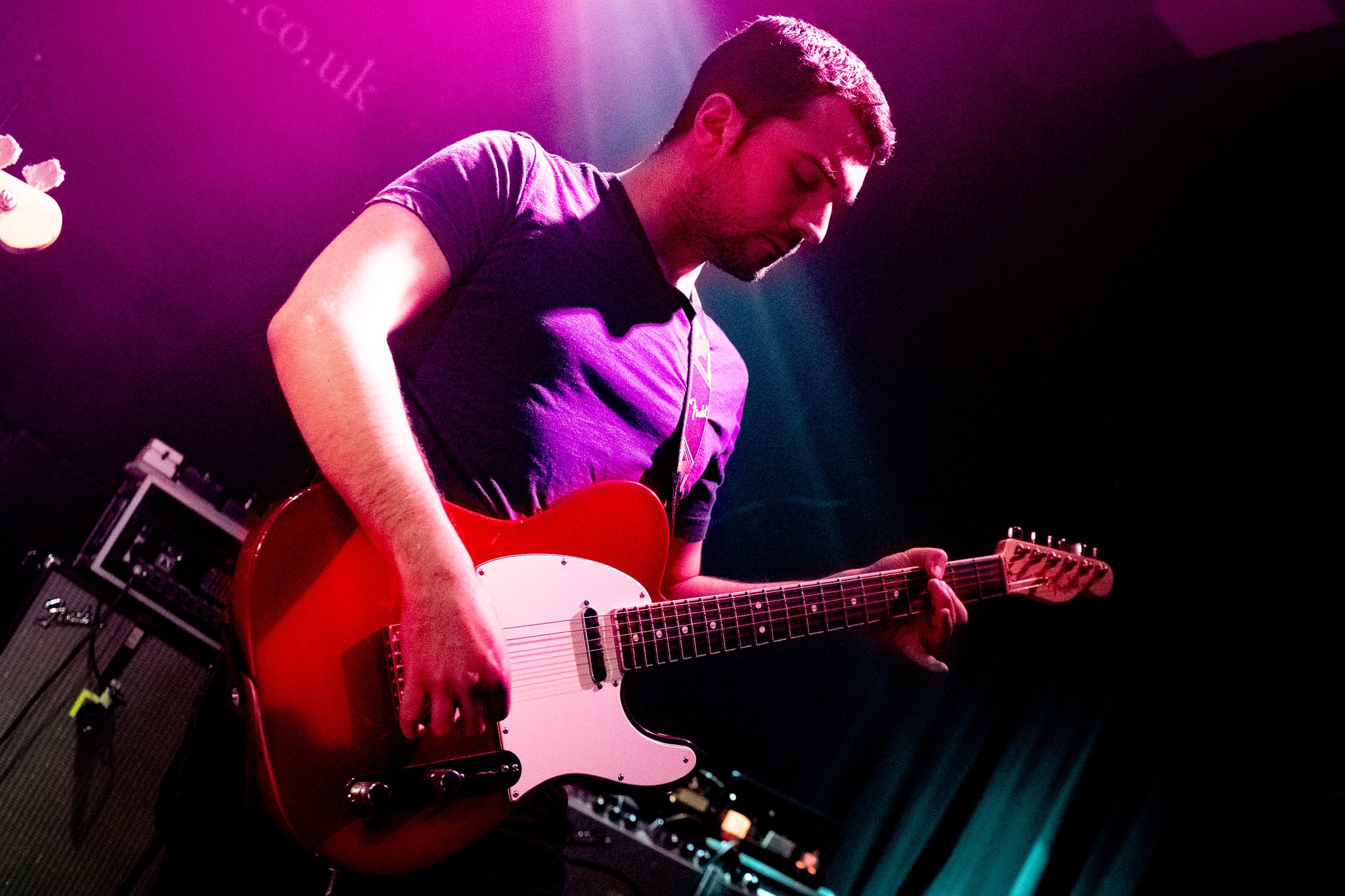 Katie stared off into the distance as though in some dream and only spoke once in between the tunes during their set and that was to thank the audience and announce the band’s name and to add that the next track was in fact to be their last of the evening. This is the sort of behaviour New Order used to do when they first started out, you know, the less is more analogy, which leaves you wanting more. Well it seemed to have worked as the punters took warmly to the quintet. 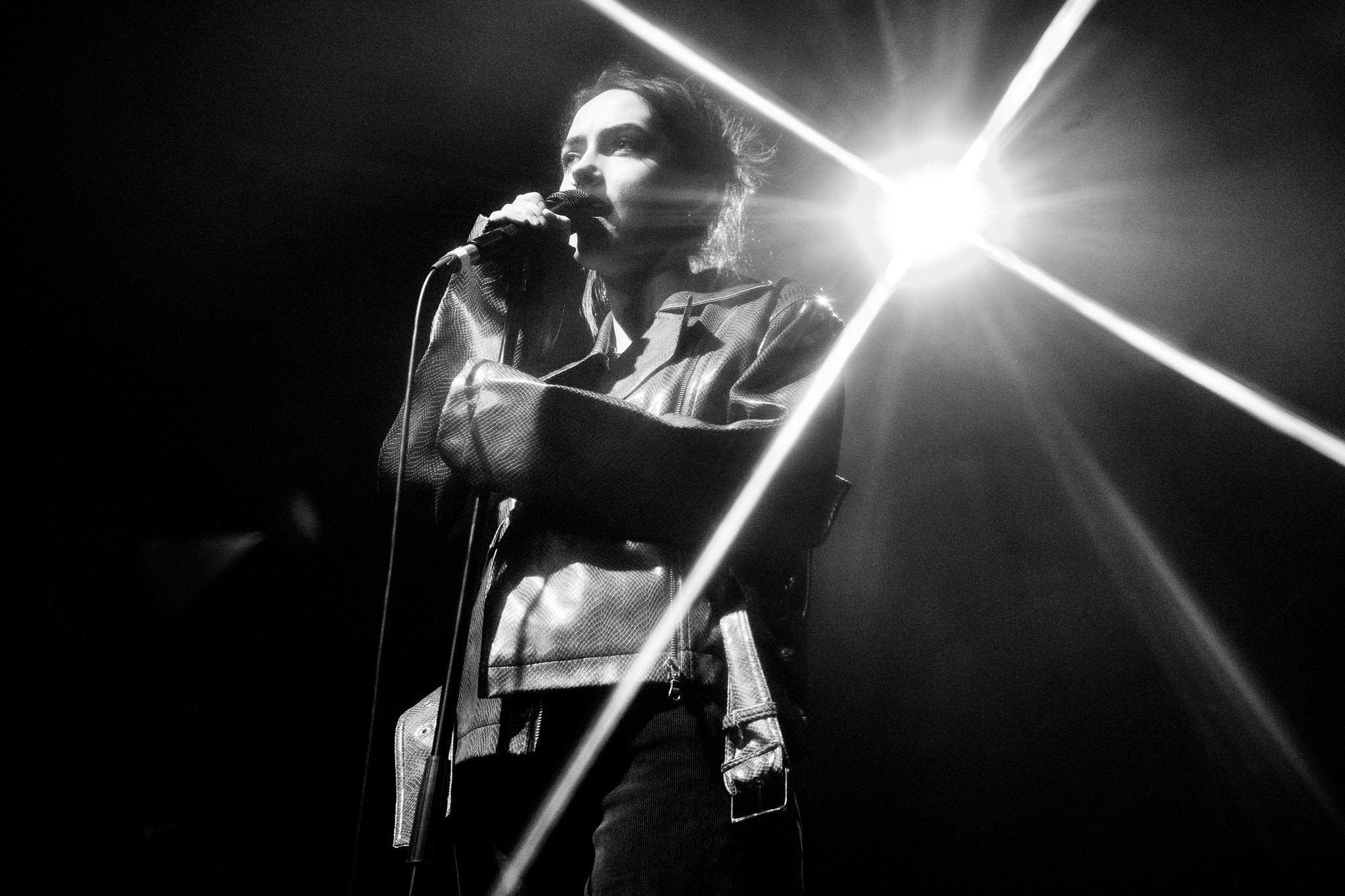 Just Mustard released their debut eight tune album entitled ‘Wednesday’ last May and their forthcoming single ‘Frank’ / ‘October’ will be dropped on 1st June. In the meantime you can watch their new video for ‘Frank’ HERE. 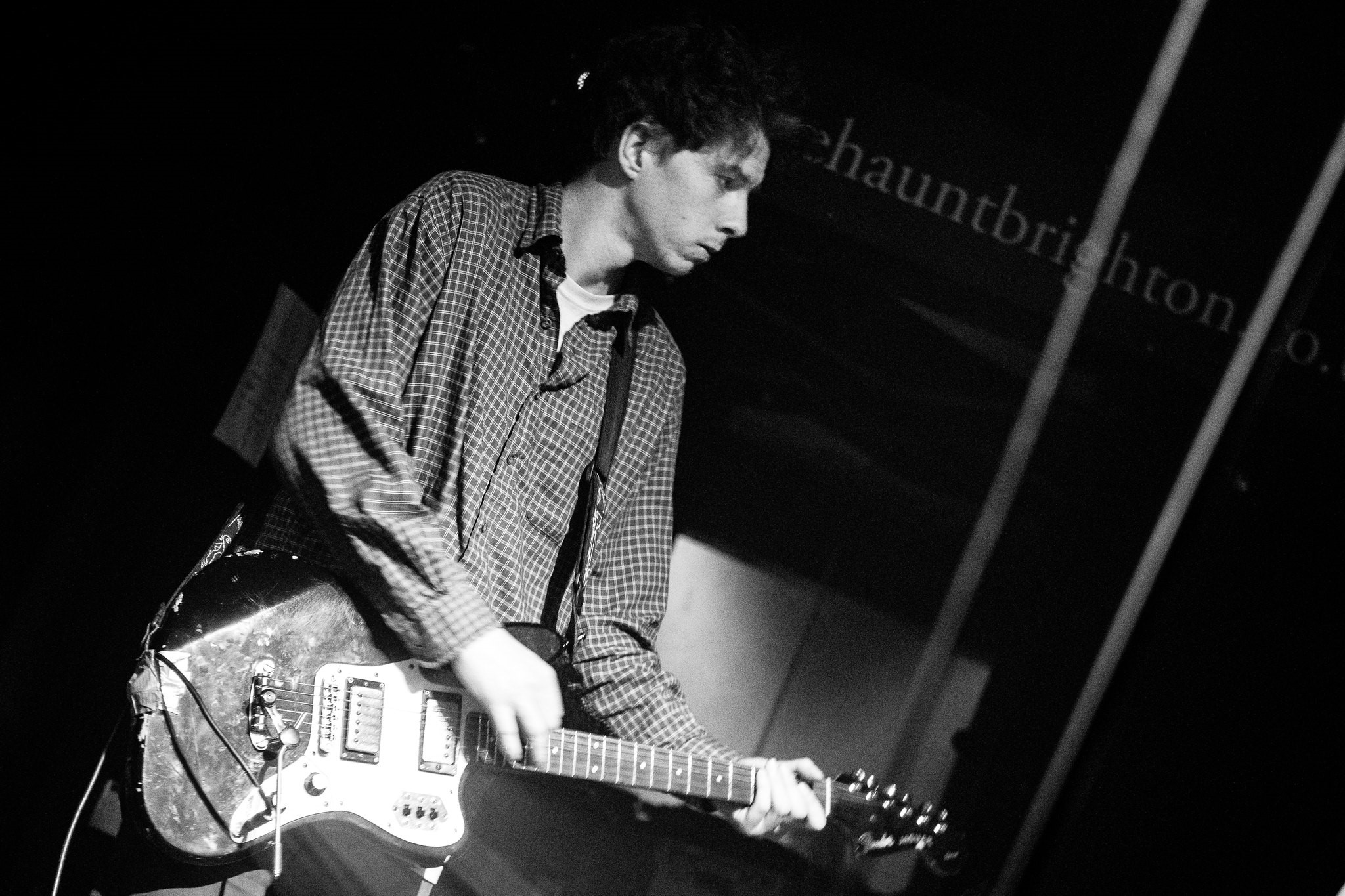 If you got to The Haunt late and missed them, or just fancy seeing them perform in Brighton again, then your luck is in because the band are set to return next month, when they will be performing two sets at The Great Escape new music festival. 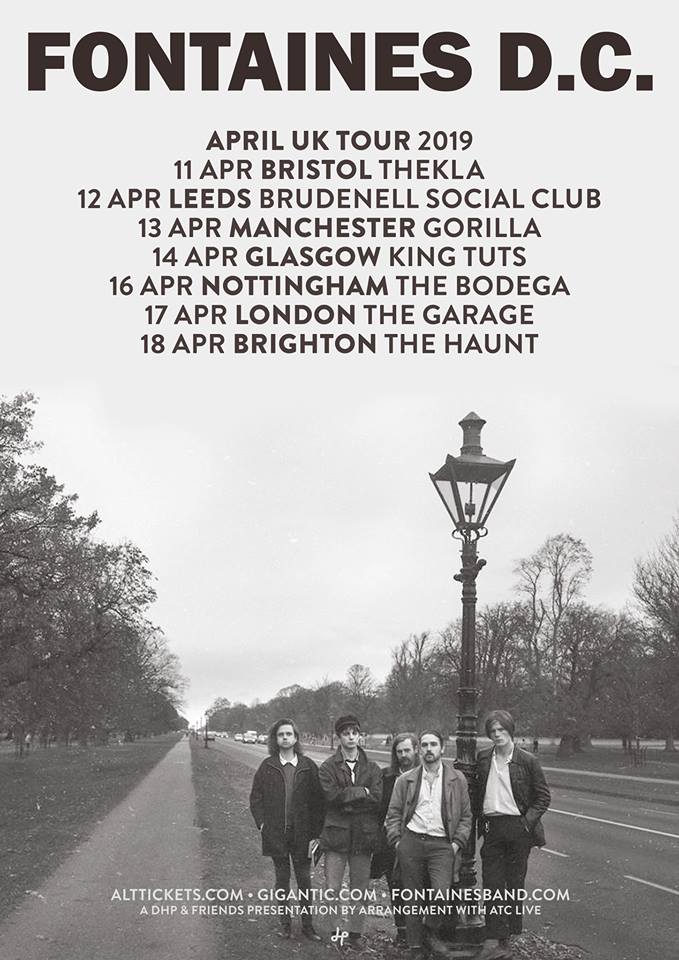 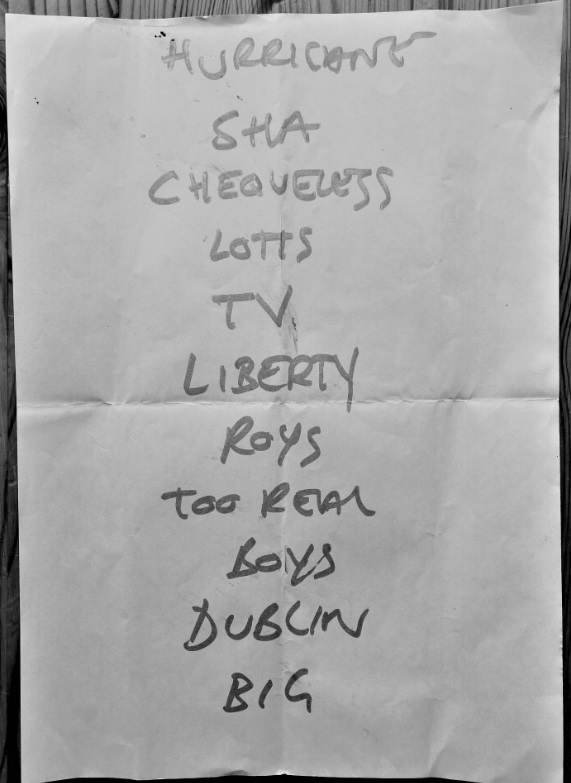 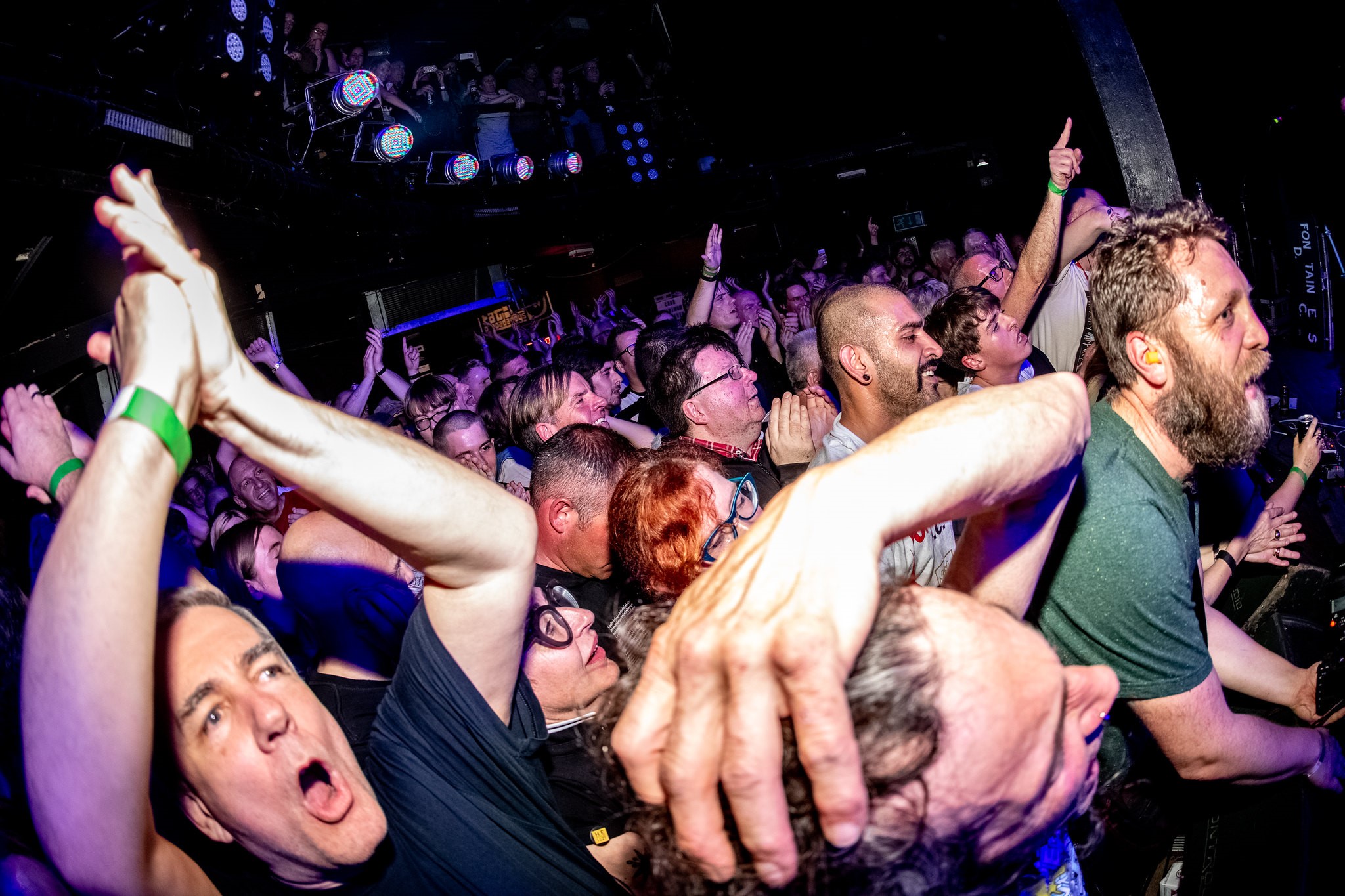