Brighton seafront hotel to be given multimillion-pound makeover

One of the biggest and best-known hotels on Brighton seafront is to be given a multimillion-pound makeover.

The Hilton Brighton Metropole plans to work in partnership with the developer First Base “to undertake an extensive refurbishment of all the guest rooms and public areas”.

The Metropole’s owner Topland said: “The owners of the Hilton Brighton Metropole Hotel have announced a new partnership with developer First Base and are in advanced negotiations with Hilton to redevelop the iconic property, subject to planning approval.

“If confirmed, the multimillion-pound investment would make a significant contribution to the ongoing regeneration of Brighton’s seafront.

“Topland, which acquired the Hilton Brighton Metropole in 2011, and First Base plan to undertake an extensive refurbishment of all the guest rooms and public areas.

“The local landmark will be carefully restored to protect its heritage while giving the buildings a new lease of life.

The Metropole had a £2 million facelift in 2004 and last year a multimillion-pound makeover of the neighbouring Grand hotel was completed.

The Victorian façade was repainted, the balconies were restored and new windows and balcony doors were fitted.

In addition, 105 of the 201 bedrooms were refurbished, with air conditioning installed, while the Victoria Bar, Lounge and Terrace were also refreshed.

While no start date was given for work on the Metropole, Topland’s director of asset management William Davies said: “This agreement will represent a considerable investment in one of Brighton’s best-known landmarks.

“The plans will support the city’s intention to enhance its reputation as a top tourist destination and help its economy to evolve from being seasonal to one that is sustainable throughout the year.” 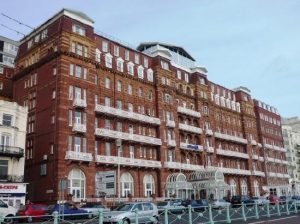 First Base director Barry Jessup said: “We are delighted to work with Topland to upgrade this Brighton landmark.

“We will be actively engaging with residents and businesses over the coming months, working together to enhance the hotel and delivering social and economic benefits to the city.”

First Base is currently involved in two other projects in Brighton. One involves the demolition of the derelict Anston House office block, opposite Preston Park, and the building of 230 flats.

First Base said that preliminary work to demolish Brighton’s “ugliest building” had started, in the hope that it will start coming down in late summer.

The company is working on the Anston House project in partnership with the Hyde housing association.

First Base’s other Brighton project is known as the Edward Street Quarter and involves building six blocks of flats and offices.

The scheme – on the site of the old American Express offices and next to Amex’s new European headquarters – is intended to provide almost 170 homes.

The company said: “First Base is one of the most active mixed-use developers in Brighton, currently delivering 320,000 sq ft of commercial, leisure and residential development at the Edward Street Quarter.

“Community consultations will commence shortly including a series of residents’ workshops and community meetings.”