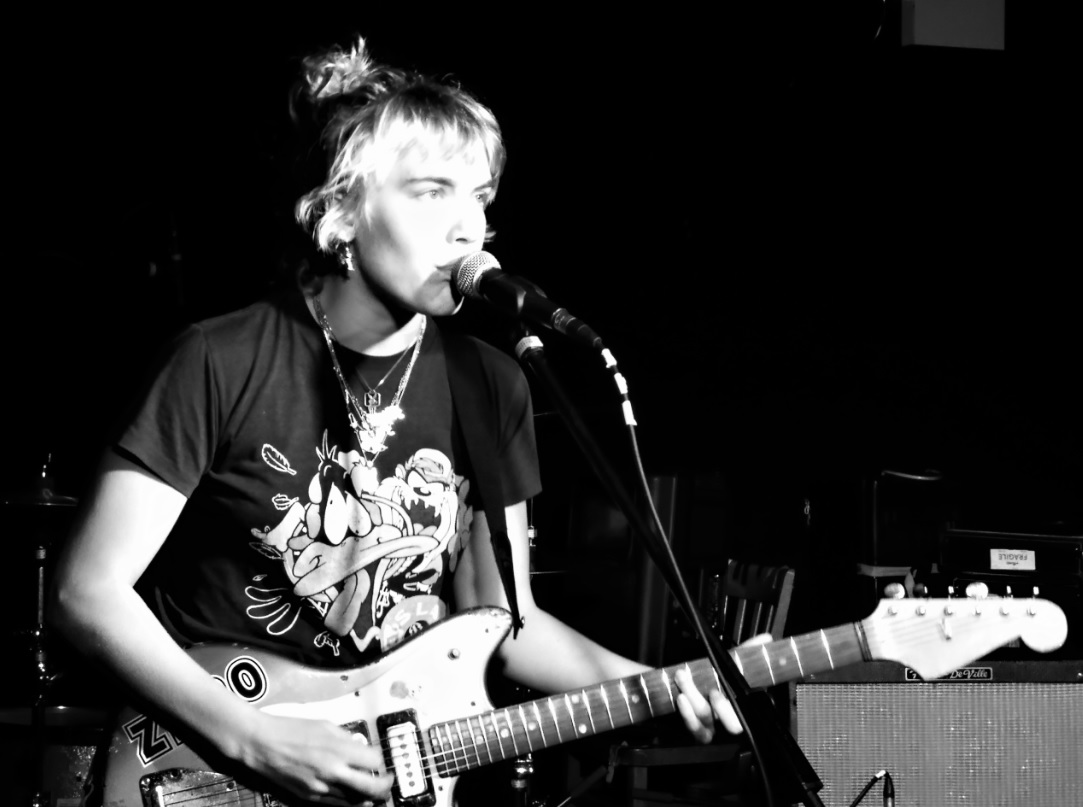 Wonderful New Zealand band Miss June were in town this evening as part of their ten date 2019 ‘Bad Luck Party’ UK Tour, which thus far has entertained crowds in Birmingham, Manchester, Leeds, Glasgow, Edinburgh, Cardiff, Oxford and Bristol. With final night being in London tomorrow. However the band informed us that tonight in The Latest Music Bar that this evening is actually their 23rd or 24th concert, as they have previously been touring the world and started on 6th September back home in Wellington, New Zealand. 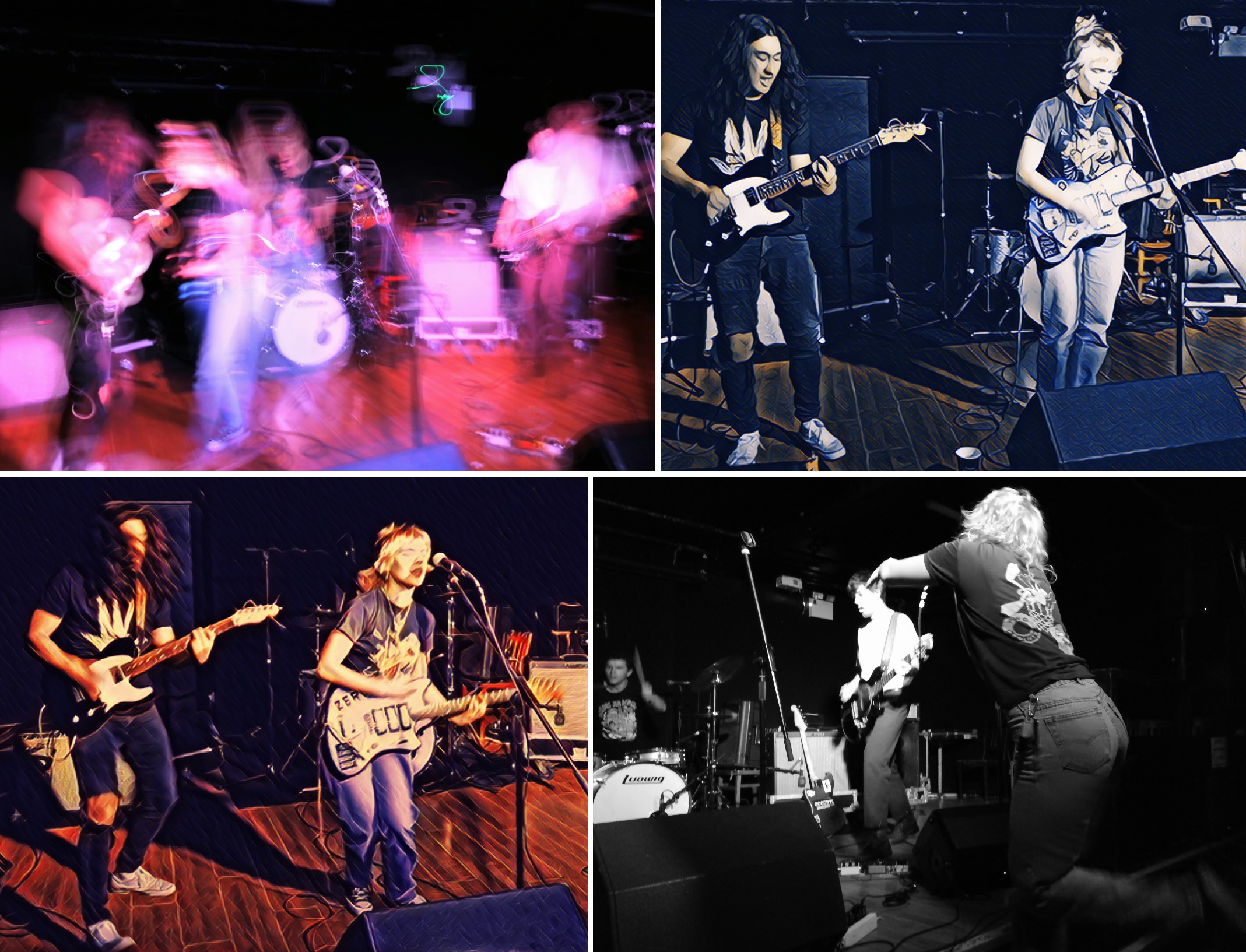 The band has built a reputation for fierce, formidable and head-spinning live shows which have caught the attention of acts like The Foo Fighters, Shellac, Wolf Alice, IDLES and Die! Die! Die!, who have all eagerly harnessed their support on stage.

Combining elements of post-punk, no-wave and rock, Miss June hold close their DIY roots while creating a blistering, reckless sound full of melodic hooks and overdriven riffs that are at once immediately recognizable and yet entirely their own.

Their decent 11-track debut album ‘Bad Luck Party‘, (which I purchased this evening from the band) is worthy of inclusion in those ‘End of Year Album Charts’ as it is a very consistent platter, and vinyl collectors should take note and secure the ones that have a sticker on the front, as those are the ones that contain a striking blue vinyl record inside.

Clearly this evening Miss June were at the ‘I’m beyond tired and just gonna have fun stage’ as they were seriously chilled with the audience and themselves in general, other than regrettably losing some money on the slot machines on Brighton Pier. Here was a band that were going to enjoy themselves this evening. I too was entertained by their decent 10-song set, which was virtually all of the new album. If you think along the lines of the gnarly sweetness of Wolf Alice and The Primitives with added ‘in-yer-faceness’ of Amyl & The Sniffers, then that’s Miss June. In other words …Terrific!. 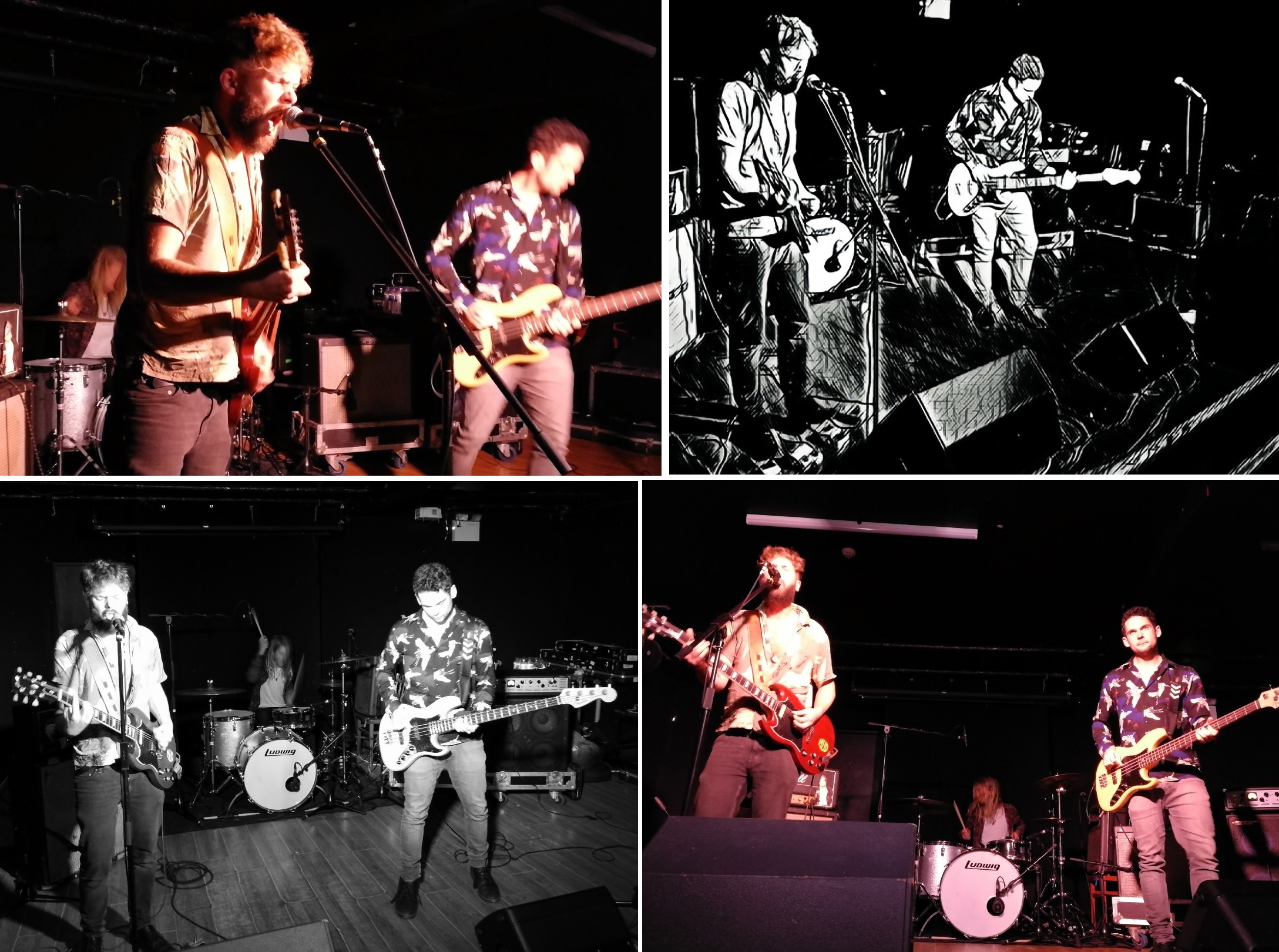 The evening was kicked off by local Sussex heavy rock trio Blue Stragglers, who are Lee Martin (guitar/vocals), Ali Waite (bass) and Andy Head (drums). This was my first encounter with the band, despite the individuals being around the Brighton music scene for a dozen years. Having said that, I know I have witnessed singer Lee performing with another local outfit called Talk Shop on a couple of occasions.

Tonight these lads were here to rock, and I mean rock hard! If you are a fan of Lenny Kravitz, Nirvana, Led Zeppelin, Foo Fighters and the like, then these guys will do for you nicely. During the eight tune set, Lee frequently held long notes that would make your arteries burst, whilst Andy thumped away on the drums and Ali twanged the bass. Stand out tracks were ‘All Mine (Sometimes)’ which has a fab drum intro and must be a future single release; and ‘Late At A Festival’ was the pick of the bunch too.

Blue Stragglers setlist:
‘Recover’
‘In Love For Half An Hour’
‘All Mine (Sometimes)’
‘Cold Black Arrow’
‘Sleepless Nights’
‘Celebration’
‘Late At A Festival’
‘Selfish Scene’ 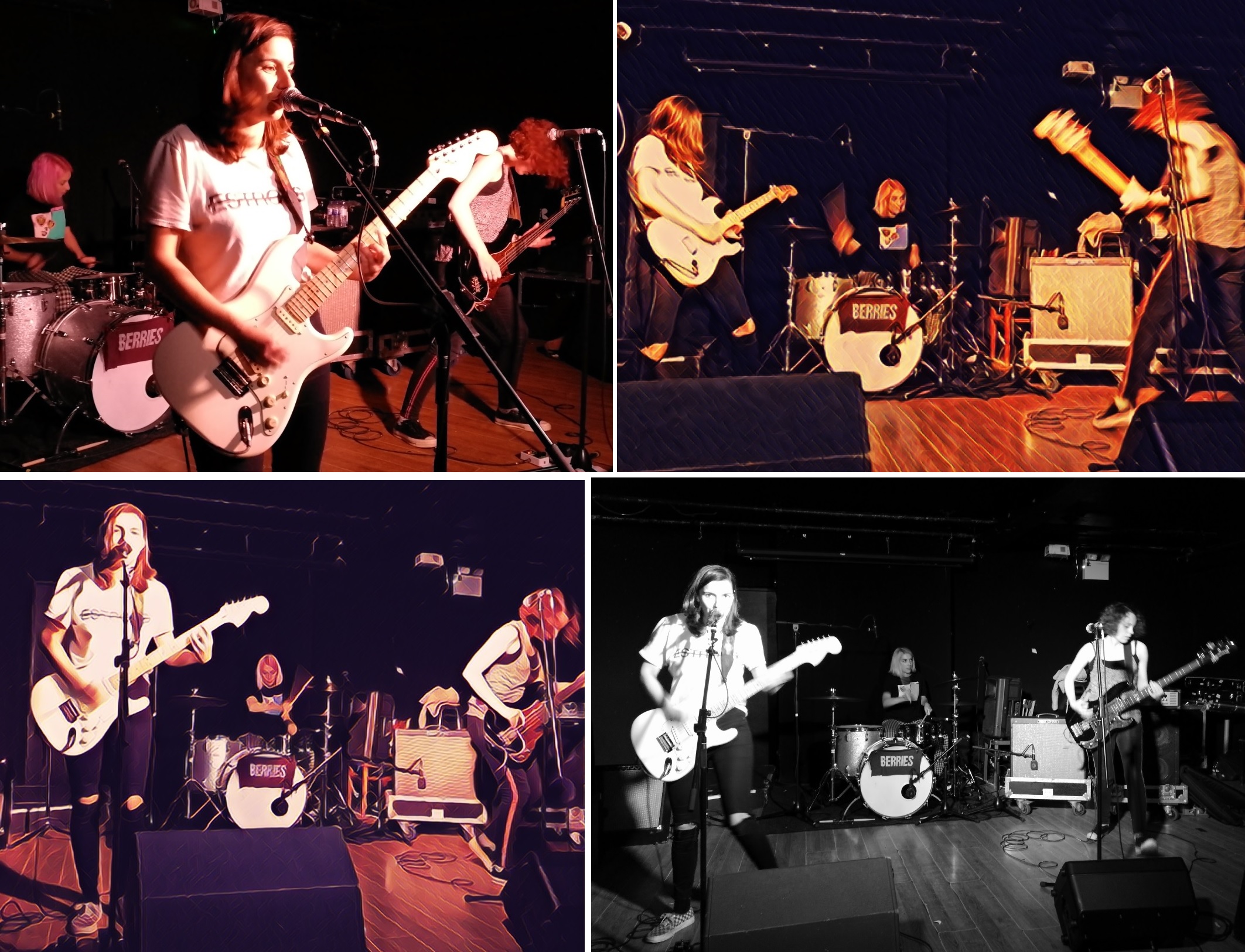 Next up were London based alt-rock BERRIES who I enjoyed watching live last November at the Green Door Store with Estrons and Lucia. BERRIES (always written in capitals) are Holly (vocals/guitar), Lauren (bass) and French born Lucie (drums), and they have been playing together for around three years.

This time as last time, they just took to the stage and got on with it. No messing around, just let’s play our seven song set and have fun. Holly is certainly bursting at the seams with energy and charisma and is very much the frontwoman whereas bassist Lauren and drummer Lucie are happy to chill out. Their upbeat melodies and cool guitar riffs, coupled with powerful bass lines and distinct drum beats, have earned them support from BBC Radio, BBC 6 Music, Radio X, Amazing Radio and Fender, who selected them as one of their top ten favourite new acts as part of a feature for Richer Unsigned. 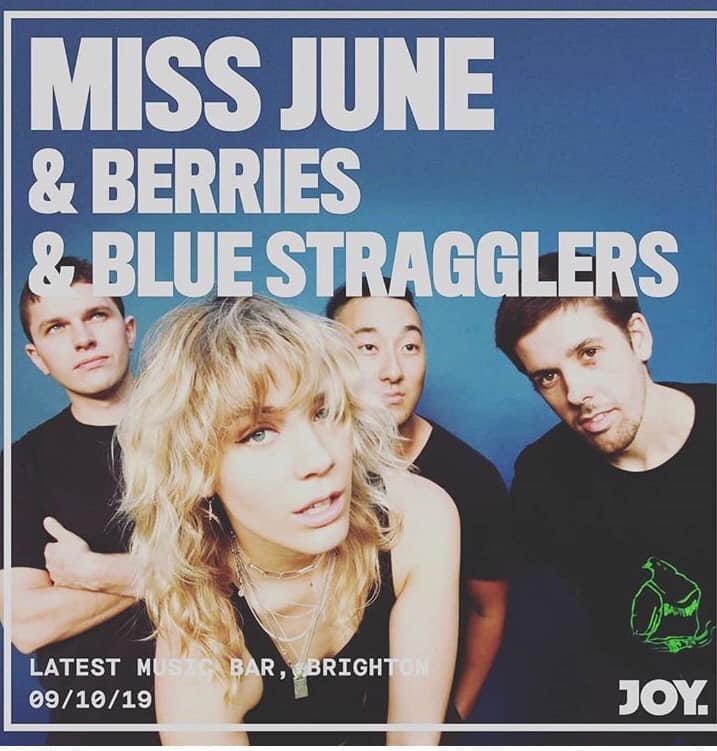 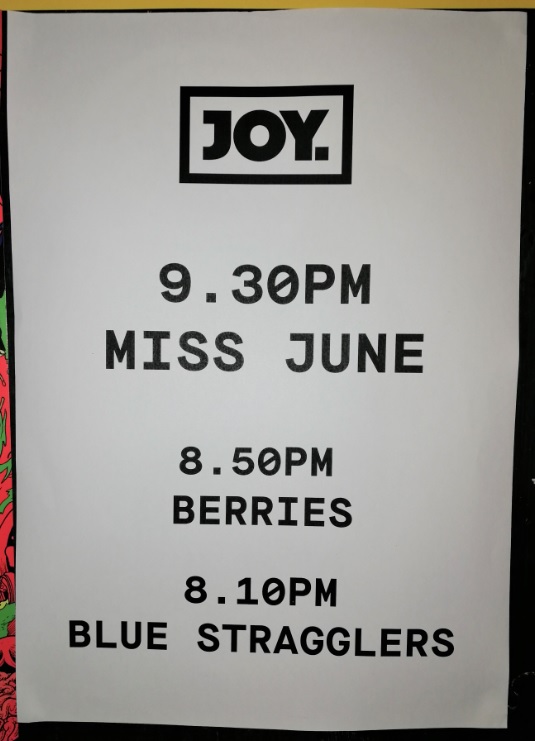