A housing developer has won backing for changes to a controversial £10 million scheme on a site on the edge of the South Downs.

Hyde Housing wanted to alter the layout of the 32 homes that it hopes to build on land off Falmer Avenue, in Saltdean.

More than 70 neighbours objected to the latest planning application submitted by the housing association which first applied to build 28 houses and four flats on the site six years ago.

Brighton and Hove City Council turned down the original plans but a planning inspector allowed them on appeal in 2017.

With just over a fortnight to go before the planning permission was due to expire, Hyde was granted permission for changes that it said would make the road safer.

The original design was drawn up without input from a civil engineer, the council’s Planning Committee was told. As a result, practical problems were identified when work started on site.

Councillor Mears, one of the three ward councillors, said: “In my view this is a new planning application with substantial changes (and) this application goes against the conditions imposed by the planning inspector.”

She remained concerned about the size of a proposed turning circle, saying that it would not be wide enough for a fire engine.

One of the objectors to Hyde’s planning application, resident Linda Whitby, told the Planning Committee that the changes meant that the scheme was not the one “determined at appeal”.

Mrs Whitby said: “There is no justification for granting this scheme, with substantial unresolved compliance issues, just because the planning approval is about to expire.

“In truth, a new application – supported by adequate due diligence to ensure it can actually be built and is not in contravention of the inspector’s appeal decision – could bring greater benefits.”

She said: “We have all been concerned about the design of this development and its visibility from the South Downs National Park.

“The view will be radically changed by a view of ‘boxy’ houses, prominent on the site with no design review or input from the South Downs National Park.” 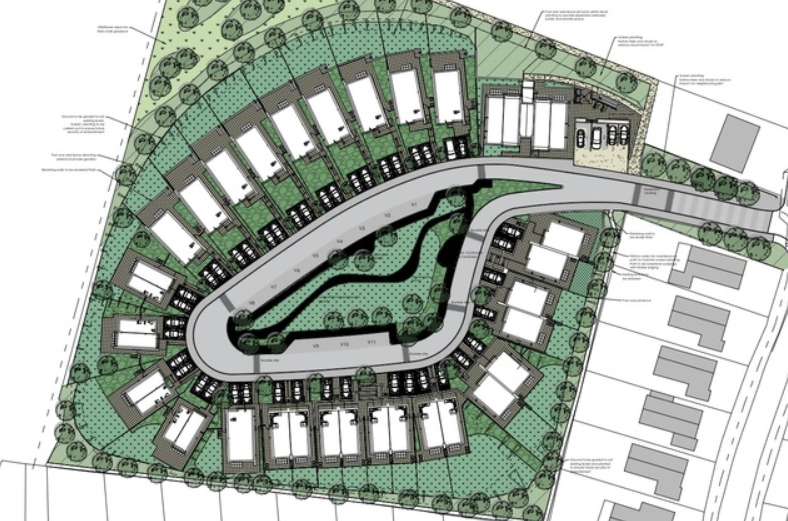 Paul Burgess, from Brighton planning consultants Lewis and Co, spoke for Hyde and said that if the application was refused, the council would miss out on much-needed housing including 13 affordable homes and two wheelchair-accessible homes.

It would also miss out on a sizeable developer contribution, with more than £370,000 earmarked for local schools, play areas and bus stops.

He said that the reason the council originally refused the application in 2016 was because of the modernist design.

The scheme had gone through the scrutiny of a public inquiry, he said, before it was approved by a planning inspector.

Mr Burgess added that the latest application would ensure that the road would be suitable for wheelchair users.

Conservative councillor Carol Theobald said that there should have been more input from the South Downs National Park.

She said: “The design of the buildings look like white unattractive washing machines. All these white buildings on the hill is very unattractive and there are far too many houses.”

Independent councillor Bridget Fishleigh also opposed the project. She said: “We keep being told these are minor amendments.

“If there are changes to where homes are, changes to the size and the height and making them nearer to the existing houses, then it is not minor it is major.

“We haven’t even spoke about the road layout changing.”

Independent councillor Tony Janio said that he felt “desperately sorry” for the dozens of residents who filled the public seating in the council chamber.

Green councillor Phélim Mac Cafferty, a former chair of the Planning Committee, said that he had backed the original planning application.

He said that the applicant had rightly made the case that the council could not show that it was planning and building enough new homes.

As a result, Councillor Mac Cafferty said, the council had only narrowly avoided having costs awarded against them at the planning inquiry.

The Planning Committee voted seven to three for the revised plans, with Conservative councillors Joe Miller and Carol Theobald and Independent councillor Bridget Fishleigh voting against.

The land was owned by retired timber merchant Ted McNorvell whose home has been demolished to make way for the entrance to the cul-de-sac.