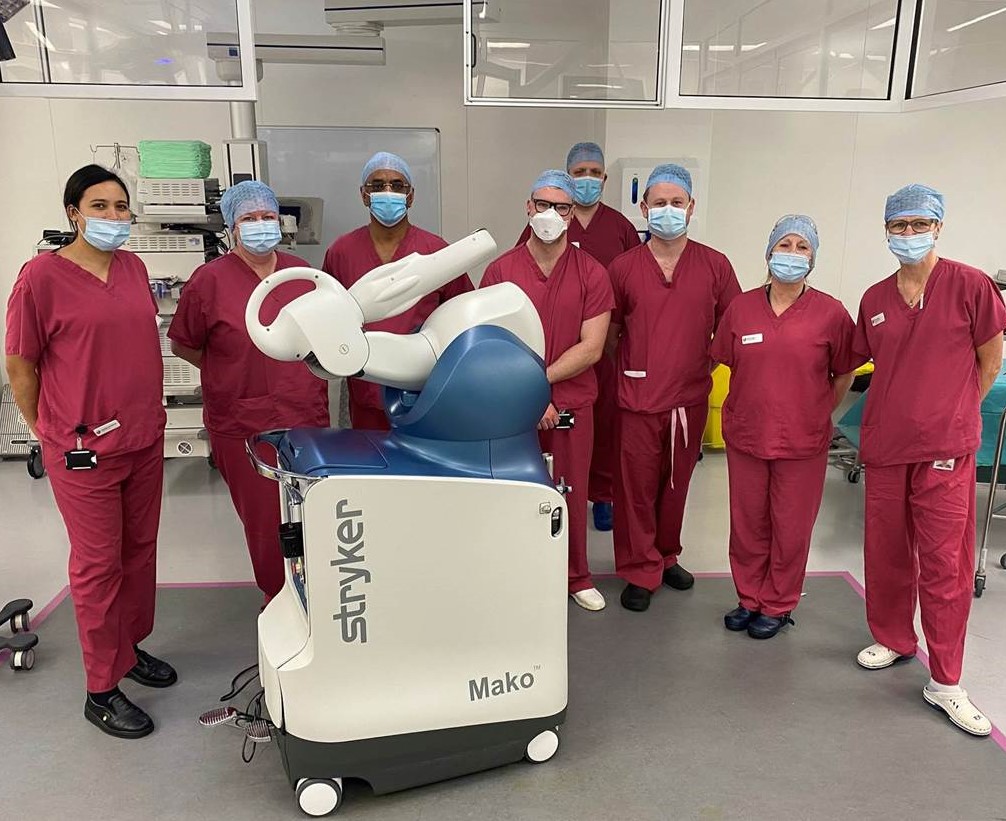 Bridget the surgical robot – named after fictional heroine Bridget Jones – has already been rated v good by one satisfied patient.

To Mr Chauhan and fellow surgeons, the robot is a Stryker Mako, but the theatre team at the Spire Montefiore Hospital, in Hove, have nicknamed it Bridget.

Theatre manager Karen Craker said: “We decided to call it that as you have to cover the robot with a large drape during surgery which is like a pair of big pants – just like in the film Bridget Jones’s Diary.”

The 5ft robot has proved much more reliable than its fictional namesake though, enabling skilful surgeons to operate with even greater precision than before.

Before surgery, each patient has a CT scan and, from this, a 3D image is created and programmed into the robot, giving surgeons a unique “map” for every operation.

The robotic arm then precisely guides the surgeon’s hand to remove diseased bone and cartilage before they insert an artificial joint.

The Mako is believed to be the only robot which can be used for three common joint procedures – hip, knee and partial knee replacement – and is understood to be the first robot of its kind in Brighton and Hove.

Mr Chauhan, who was the first surgeon to use the robot at the Montefiore, said: “It allows for incredible precision as the 3D plan means you cannot deviate from that path which avoids the removal of healthy bone tissue.

“This is extremely exciting for me and my fellow orthopaedic surgeons and very good news for patients as this precision means less trauma during surgery, reduced pain after surgery and improved recovery.

“This robot will revolutionise hip and knee replacement surgery at the Montefiore.” Brighton resident Hugh Thompson, 53, was the first patient to have a partial knee replacement assisted by the robot, after years of pain caused by osteoarthritis.

He said: “I didn’t find out about the robot until the day of my surgery but I was really excited as I have been an avid follower of robots and how they are used in hospitals.

“My recovery has been much more impressive than I expected. I was up and walking within the first three hours and off crutches within two weeks.

“When they took the dressings off, I saw a clean wound and no bruising – it was extraordinary.”

The Montefiore’s surgical team performs about 600 joint replacements a year and, while the robotic arm will initially be used for knee surgery, it is expected soon to play a vital part in hip replacements.

Interim hospital director Peter Harris said: “We are pleased to be able to offer this latest advancement in technology to our patients.

“We now have the best of both worlds – highly skilled and experienced consultant orthopaedic surgeons and visionary robot technology.

“This will help us to achieve the very best outcomes for patients.”