Hundreds have wrong number for emergency care in Brighton and Hove

Hundreds of people who use an emergency care service may not have the right number to call when they need it most.

The problem came to light when a 77-year-old woman was injured as she tripped on an uneven surface at the entrance to Greenleas park, in Hangleton Way, Hove.

The woman, a carer who asked to be identified only as Diane, was unable to get through to the Carelink Plus emergency number.

She wanted someone to stay with her husband so that she could go to hospital for treatment for a suspected broken rib and cut face.

Conservative councillor Dawn Barnett raised her case at a Brighton and Hove City Council meeting last week, saying that the line was dead when the women called the out-of-date number.

Diane’s husband has a care plan that was set up just three months ago, in April, and it included emergency respite support from Carelink Plus.

Earlier this month, at about noon on Friday 9 July, she was unable to contact Carelink Plus after she tripped on the remains of a paved surface at the park entrance.

She said that passers-by came to her aid, helping to clean up her wounds and offering help when the accident happened.

But her husband cannot be left alone and her daughter was working, so she was reluctant to go to the Accident and Emergency (A&E) Department at the Royal Sussex County Hospital. Instead, she saw her family doctor the next day.

Brighton and Hove City Council said that the emergency number had changed since April, but Diane was not informed.

About 900 people currently have the now out-of-date card.

Councillor Barnett, who represents Hangleton and Knoll ward, is a keyholder for people who sign up to Carelink, so that if they need help, she can reach them.

She said: “It’s disgusting what’s happened with Carelink. So many people rely on that. It’s disgusting if that number’s been withheld from all these people who might need it.”

Those who needed Carelink were usually elderly, disabled or both, Councillor Barnett said, adding that when they most needed its help, “they’re left just swinging in the breeze.” 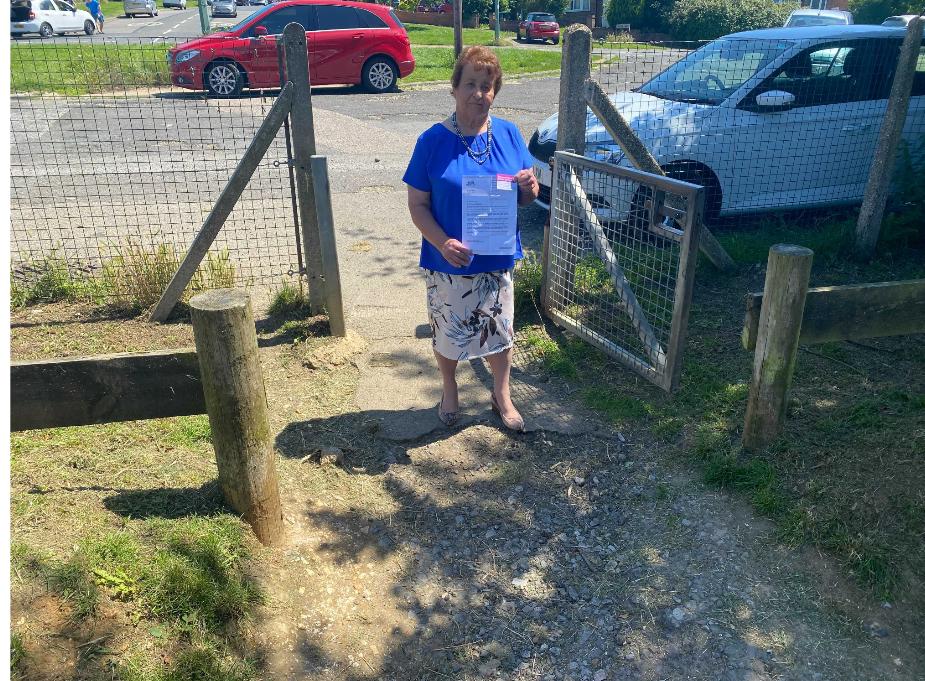 Councillor Dawn Barnett at the entrance of Greenleas in Hangleton

She sent photographs of the woman’s injuries to council chief executive Geoff Raw and called for action to make the entrance to Greenleas safer.

She said that there were lumps of asphalt and the remains of a concrete fence post, causing a trip hazard.

Councillor Lloyd, the deputy chair of the council’s Environment, Transport and Sustainability Committee, apologised for the accident and wished Diane well.

He said that the council was taking a “risk-based” approach to managing pavements and asked Councillor Barnett to contact him personally to ensure that the pavement was looked at.

After the meeting the council said: “We would like to apologise to any of our carers who have not been able to get through to Carelink Plus due to the change of phone number.

“This situation has now been rectified with a message providing the new number.

“We are currently taking steps to make our carers aware of the new Carers Emergency Back-Up Plan number which is 0300 1233 308.

“All new cards we are sending out carry this new number.”