Caterham is to open the world’s highest car “dealership” to celebrate the arrival of its new Seven 170. 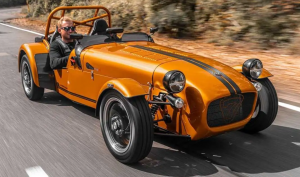 Located 450ft in the air on Brighton seafront, the pop-up store will be based in the British Airways i360 pod on Thursday (30 September).

As well as displaying its new Seven 170 and other products, Caterham is looking to build an entire Seven 170 from scratch in a single day within the pod itself.

A team of Caterham engineers supported by Avon Tyres and Halfords Advanced are setting themselves the challenge of building the car between 10am and 4pm. Caterham usually estimates that a one-person build takes around 100 hours.

It’s the first time that a car has been inside the British Airways i360 pod. At 531ft in total, it’s taller than the London Eye, Big Ben and Tower Bridge and gives visitors a 360-degree view of the coast and the English Channel.

Caterham Cars chief executive Graham Macdonald said: “This is our lightest ever product so we wanted to launch it in a memorable way. We certainly feel opening the world’s highest car dealership in the British Airways i360 does that while also bringing to life how light the car is.

“In addition to opening the dealership, our team of engineers will showcase one of the most exciting things about our product – that you can build it yourself.

“We have built cars in interesting places before but never this high. It will certainly add another layer of complexity and excitement to the build.”

The new Seven 170 arrives as the lightest car in Caterham’s range, offering a 0-60mph time of 6.9 seconds courtesy of a 660cc Suzuki-sourced turbocharged petrol engine