What’s in a name? And what other political and electoral changes are afoot?

As well as preparing for a meeting of the full council this week, I have been fascinated to read the recommendations of the Local Government Boundary Commission for England.

The LGBCE is looking to redraw ward boundaries across Brighton and Hove before the local elections next year to better serve shifting population patterns.

These were published on Tuesday (1 February) after a first round of consultation took place towards the end of last year.

Of course, in describing it as fascinating reading, I have to admit that councillors are more likely than other residents to have a geeky, almost obsessive interest in this subject, and to be found poring over the new suggested map.

We have been noting which street has been taken out of one ward and added to another and who might find themselves living in a newly created or renamed ward, etc.

And this is borne out by looking at the submissions received during the first consultation period and seeing how few there were from ordinary residents.

This is understandable in many ways – after all, will most folk hold a strong opinion about being told they now live in a newly created “Fiveways” ward rather than the old “Hollingdean and Stanmer”?

Their flat or house hasn’t moved or changed – and probably their polling station won’t either – just what their little bit of the city is called.

But there are things that might matter to some including, I suspect, residents of the southwest end of my ward.

Most of those living in streets like Dorset Gardens, New Steine, Upper Rock Gardens and St James’s Street consider that they live in Kemp Town, despite the ward being called Queen’s Park. 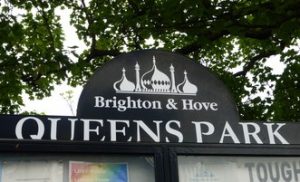 The latest proposals would create a new ward containing bits of three others – to be called “Kemptown and Marina”.

This is a change that I would have thought some people at least would have strong views about.

If you’re one of them, or even just interested to have a look at the city-wide proposals and take part in the second and final consultation, you can follow the links and have your say here.

Councillor Amanda Evans is the deputy leader of the Labour opposition on Brighton and Hove City Council.