Robbie Williams to sell his Brighton Banksy – the Kissing Coppers

Pop star Robbie Williams is to sell three works by the street artist Banksy, including the Kissing Coppers, which could be seen on a pub wall in Brighton for about 10 years. 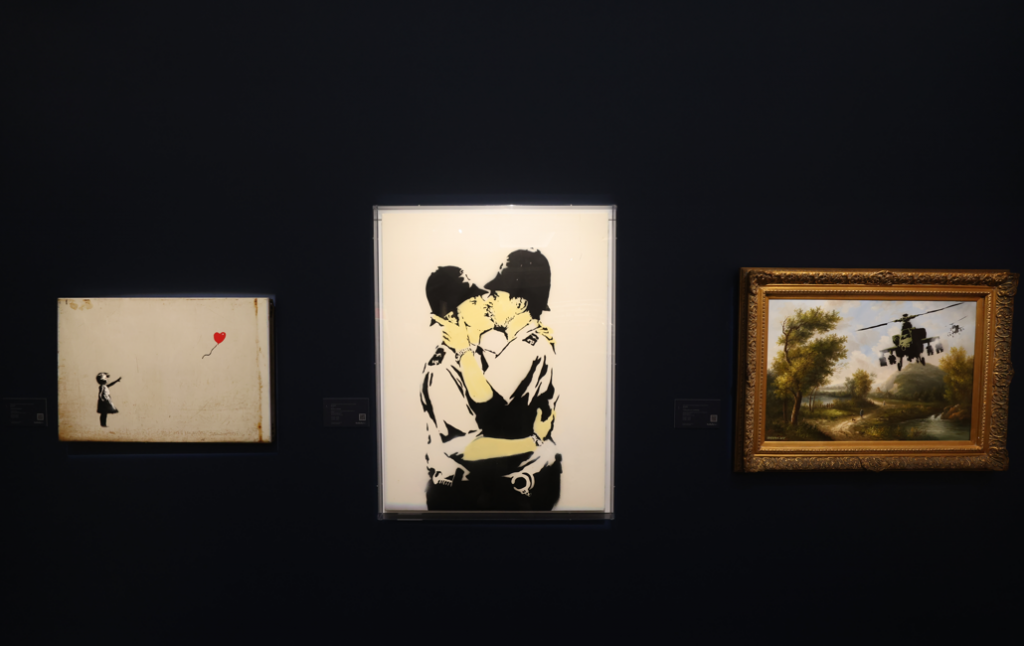 The stencil mural appeared on the wall of the Prince Albert pub, in Trafalgar Street, in 2004 but was repeatedly vandalised and daubed with graffiti until it was removed in 2014.

Williams’s version of the Kissing Coppers was made by Banksy in 2005 and its sale will mark the first time a Kissing Coppers on canvas has been offered for sale on the secondary market.

The picture, which is due to be sold by auctioneer Sotheby’s, in London, on Wednesday 2 March, has been given an estimated value of £2.5 million to £3.5 million.

Williams is also selling a version of Girl with Balloon, depicted on metal, with an estimated value of £2 million to £3 million, the first of its kind to appear at auction.

The third Banksy being sold by 48-year-old Williams is Vandalised Oils (Choppers). It depicts two helicopters disrupting a pastoral scene from the artist’s Vandalised Oils series – and is expected to fetch £2.5 million to £3.5 million.

Sotheby’s plans a series of modern and contemporary art auctions, including the Banksy artworks from the former Take That member’s personal collection which are currently on show at the auction house.

At the auction next month Magritte’s L’Empire des Lumieres is expected to sell for more than £45 million.

The work was created in 1961 for Magritte’s close friend Baroness Anne-Marie Gillion Crowet, the daughter of Magritte’s patron, Belgian Surrealist collector Pierre Crowet, and has remained in the family ever since.

Alongside it will be Monet’s Nympheas, painted between 1914 and 1917, and Picasso’s Buste de Femme Accoudee, painted in 1938.

The latter charted the artist’s evolving relationship with his muse, Marie-Therese Walter, and the increasingly dominant presence of his new lover, Dora Maar.

Hockney’s Garrowby Hill, 2017, will also be among the lots. It depicts the British countryside combined with the bright colours of Los Angeles, California, where Hockney had a home for many years.